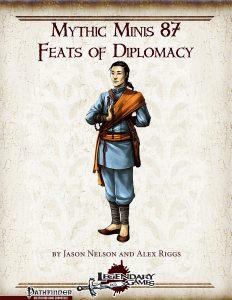 -Call Truce: Add mythic tier to Diplomacy checks made; on a failure, you may not use Diplomacy again with a creature entreated with for 1d4 minutes rather than hours; during the round you are calling a truce, you gain the defense bonuses of total defense as well as +1/2 tier to saves versus mind-affecting effects. For mythic power expenditure, you can use it with creatures with whom you do not share a language as well as gaining + tier to Bluff, Linguistics and Sense Motive to communicate across the language barrier for 1 round. Has a minor, purely aesthetic hiccup, a reference to Diplomacy that is not capitalized.

-Entreating Critical: When you confirm a crit versus a creature, you may choose to deal lethal or nonlethal damage; if you choose nonlethal, you gain crit multiplier to Diplomacy with the creature for 24 hours. Alternatively, instead of rolling the confirmation roll, you may expend mythic power to affect the target with share language as an AoO-less SP. Creative one!

-Ironclad Logic: Bonus is increased to 1/2 Int-score and you may always take 10 on Diplomacy checks. Cool: Doubles as Skill Focus (Mythic) Diplomacy for prereq-purposes; also uses Int as well as Cha in social combat when employing tactics with assigned Int-based skills. Not a big fan of dual attribute-mods to any check.

-Nerve-Wracking Negotiator: Instead of attitude returning to normal, a creature that failed the save increases the attitude by one step for the purpose of making requests. This does only make following requests more likely and does not generally improve the creature’s attitude towards you.

-Persuasive Bribery: Doubles bonus in Diplomacy and Charisma checks, as the bonuses on the bribes. Via Sense Motive, you can discern whether a creature is susceptible to bribery in general, with various classes concisely defined. If you expend mythic power, you also have a general idea of what type of bribery would work best.

-Play to the Crowd: Add mythic tier to Sense Motive made in conjunction with the feat; surges used with the feat are applied to both Diplomacy and Sense Motive for 1 hour; If engaged in a verbal due, you learn all the target’s biases, which may be slightly overkill. When using a charm or compulsion effect (excluding fear) after succeeding a Sense Motive DC 25 check used with the feat, you increase the save DC.

-Threatening Negotiator: Renders victims of intimidation helpful when exceeding the Dc by 5 or more; has synergy with Nerve-Wracking Negotiator.

Jason Nelson and Alex Rigg’s mythic feats of Diplomacy are generally well crafted, but also ultimately represent mostly increased numerical bonuses, which are simply not that amazing for skill-based environments. Personally, I wished this had increased breadth of options more for more breadth, rather than piling on in the already abuse-prone skill-bonus depth-department. It does that, mind you, but not to the maximum extent. In comparison to what the cool subject matter Diplomacy offers, this mythic mini left me not that excited. Hence, my final verdict will clock in at 3.5 stars, rounded down for the purpose of this platform.