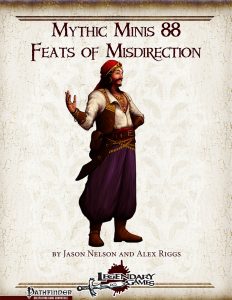 -Blustering Bluff: You can use the feat to reduce the penalty of impossible lies by 5. Creatures fooled also do not automatically realize they were fooled, only becoming cognizant of the deception when presented with evidence or contradictory claims. Nice!

-Confabulist: After botching Bluff, you can follow up with Diplomacy to admit to the lie; on a success, you gain +5 to the second Bluff check. Additionally, 1/day, you may expend mythic power to retry an otherwise impossible to retry Bluff check.

-Cutting Humiliation: The penalties of the feat’s effects are doubled. Additionally, you never become humiliated when failing to use the feat. You may also expend mythic power prior to making the check to deliver a memorable humiliation instead; this one remains in effect for 1 month per tier, as it becomes the gossip. Humiliated individuals may temporarily offset the penalty by concealing their identity, but cannot remove it by composing themselves, but beating you in social combat or intimidating you ends its effects. Now *that* type of coolness I what I expect from mythic intrigue!

-Intoxicating Flattery: The penalty extends to Bluff and Diplomacy DCs as well as influence and discovery checks made and you no longer suffer penalties from failed flattery.

-Manipulative Agility: +1 Sleight of Hand per 5 ranks of Bluff. Additionally, when delivering secret messages, check both skills and take the better result.

-Misdirection Attack: AoOs made in conjunction with this do not count against AoO-total per round. You also get +1/2 tier to attacks  and + tier damage.

-Misdirection Redirection: Target of the redirect is flat-footed for the purpose of the attack. If you expend one use of mythic power, you deal +1d6 per 2 tiers, which is treated as though it were the rogue’s sneak attack. One question here, since that wording is slightly odd: Does this mean that the damage this feat can inflict is treated as sneak attack for the purpose of prerequisites?

-Misdirection Tactics: You can use this while fighting defensively. You may also use it more often versus a foe, though subsequent uses require the expenditure of mythic power.

-True Deception: Add tier to Bluff to impersonate an individual; use mythic power to correctly guess specific information the target may know with successful Sense Motive checks, with tier as a bonus to the check. Also allows you to expend one use of mythic power to speak in a language the individual you impersonate knows as if you had cast share language. Both can be combined. Damn cool!

Alex Riggs and Jason Nelson have a nice selection of mythic feats here; while not all are amazing, there are some really creative ones here that warrant the low asking price. My final verdict clocks in at 4.5 stars, rounded down to 4 for the purpose of this platform.

You can get this nice mythic mini here on OBS!