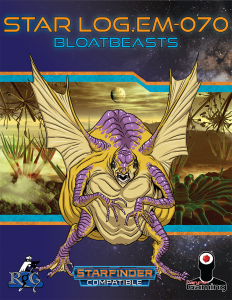 As has become the tradition with Star Log.EM-supplements, we do get some information on the context of the eponymous bloatbeasts as creatures within the Xa-Osoro system, providing context to these dangerous beings. On a mechanical level, two feats are provided that account for the tactics of these dangerous things: Improved Mobility (which has hefty prerequisites) builds on Shot on the Run or Spring Attack, and allows you to execute two attacks at -4 when using these feats instead of one, but the attacks must be executed against different targets and require minimum movement between attacks. Interesting: Depending on whether you have Shot on the Run, Spring Attack, or both, you are or are not limited to the type of attack executed in conjunction with the feat. Very cool! Springing Bravado, the second feat, builds on Spring Attack and lets you attack foes adjacent with Spring Attack; the movement still provokes AoOs, but the Mobility feat’s AC bonus is boosted, and if the target misses the AoO, it risks becoming flat-footed! This is seriously clever and cool! If you have a skirmishing character, these two feats may warrant getting this pdf for your GM…just sayin’…

Anyhow, as for the bloatbeasts, natives to the noxious fens of Deinzera, there are two builds provided – one for CR 5 and one for CR 10. Both employ the expert array and aberration traits and adjustments have been properly applied. Beyond the default darkvision, these dangerous predators have access to both low-light vision and blindsense 30 ft. As a minor nitpick, blindsense in SFRPG usually specifies in brackets something like (vibrations) or the like. On the plus-side, the flight of the critters is properly noted. Oh, and then there are the attacks. They are sentient, though not smart, and as such, have “only” melee attacks – but what attacks! You see, they use a mechanic called “bloat points” – when they hit you, you become bloated, somewhat Willy Wonka style – the body swells (formula provided) and becomes lighter…and VERY quickly, you become an impotent, essentially helpless ball…and worse, the bloatbeast can easily move such targets around and are masters of reposition…you see, they hunt somewhat akin to horribly twisted dung beetles – they bloat you and then roll you to their lair. This is twisted in all the right ways, and I frickin’ love it! And yes, getting rid of bloat points and their whole mechanics? Precise and well-codified. Did I mention that they essentially have a custom super-bloat crit?

The higher CR build cranks this up a notch, becoming one of the most delightful CR 10 critters I’ve seen for SFRPG so far – an aura of bloating is provided (though it’s, oddly, listed twice)…and yep, these beings start having some serious brutal tricks. Considering how they don’t have ranged attacks, they still make sense at CR 10, but your PCs will be afraid of these beasts…they are hilarious AND super creepy.

Editing and formatting is very good on a formal and rules-language level, and the few hiccups do not impede the integrity of these formidable foes. The layout is presented in full-color, with a nice artwork included, and the pdf does not come with bookmarks, but needs none at this length.

Alexander Augunas’ bloatbeasts are inspired critters that hit the sweet spot between WTF and laughter at the table, and abject horror. I love them. Add to that the cool feats that more than make up for the minor nitpicks, and we have a great supplement. 5 stars + seal of approval.

You can get these delightfully twisted critters (and the cool feats!) here on OBS!

This pdf is btw. also part of the massive Starfinder mega-bundle, which you can find here!