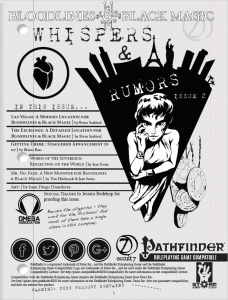 The second if these small expansion-pdfs for Bloodlines & Black magic clocks in at 12 pages, 1 page front cover, 1.5 pages of SRD, leaving us with 9.5 pages of content, so let’s take a look!

We begin this installment with a general, and a detailed location, both penned by none other than Brian Suskind – and the first of them is…Vegas, baby! Ruled by Satrine, Vegas is actually considered to be neutral grounds, we learn about The Concierge, who manages the steady flow of supernatural tourists, an ancient man with powers hailing from the Uto-Aztecan people, and we also learn about sites such as the Church of the Holy Coin, and learn about urban “legebd”[sic!]s, that, typo notwithstanding, should provide cool angles. Want it more detailed? Well, location number 2, the Exchange, the arcane market/underground, where Old Wotan may be found, among others – if you’re itching for an American Gods-storyline, there you go. Of course, the Shae, the porcelain-masked enforcers also should make for an interesting angle. Did I mention the eye thieves? Really cool locales, though both left me wanting more.

The next section, penned by Blaine Bass, is something different altogether – we get staggered advancement rules for Bloodlines & Black magic. It represents a more gradual level-up process than regular gaming in O7 – it basically provides a 25-level system, wherein each episode number corresponds to a level; the massive table denotes whether you get universal abilities, class features, skill ranks, etc. – it basically stretches the advancement process and doles out a consistent stream of improvements over the levels. The system per se is solid, but not exactly something I like – I’m more the Dark Souls-school of person – advancement only means something to me and my players when it’s earned by pain and hardship, and consistent rewards, such as in looter shooters and the like, do nothing for me. Similarly, the consistent stream of level-up options presented here doesn’t do anything for me – but that doesn’t make it bad! Perhaps it’s exactly what you and your players wanted, so while it may not be for me, it may be a godsend for you and your group.

Jaye Sonia further explains the nature of the Invisible World, touching upon things such as the City of the Dreaming Dead, and particularly, explains the decision regarding the cognitive dissonance of oddities and threshold mechanics versus the more commonly seen insanity mechanics. The article explains Pierce the Veil in more detail, and while it did not provide new realizations for me, it was great to see that my assumptions regarding design decisions behind this mechanic had proven to be true.

Finally, Tim Hitchcock and Jaye Sonia present us with…Mr No Face – when these fellows take damage, they are clad in an unearthly and potentially infectious glow. They can also emit bursts that destroy electric devices. As a nitpick: The SP in the statblock erroneously calls faerie fire “faery fire” instead, and the statblock has a few hiccups. None that would prevent you from using it, but if you’re a stickler for mechanical perfection, it’s something that might irk you. The b/w-artwork presented is pretty cool, though, and they are properly creepy.

Editing and formatting are okay – I noticed a few more typos than I like to see, and some do slightly influence rules-integrity. Layout adheres to the series’ two-column b/w-standard, and the pdf comes with nice b/w-artworks. The pdf has no bookmarks, but needs none at this length.

Brian Suskind, Blaine Bass, Tim Hitchcock and Jaye Sonia provide a nice, inexpensive little expansion for Bloodlines & Black Magic. The ‘zine is nice to have and provides quite a few inspiring tidbits. All in all, I consider this to be a pretty nice offering, closer to being good than to being okay, which is why I will round up from my final verdict of 3.5 stars.