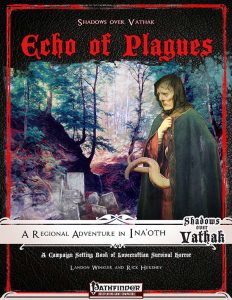 This module is set in the region of Ina’oth in the criminally-underrated Vathak setting. If you even remotely enjoyed Ravenloft and similar settings, I firmly suggest checking out the whole product line right now – it features some of the most inspiring sourcebooks out there, and I’ve reviewed pretty much all of them. (The Ina’oth-guides for Players and GMs, in particular, will help you get a feeling for the unique themes – and in horror and dark fantasy, theme is extremely important.)

It should be noted that the pdf includes 6 sample pregens, who, power-level-wise, are approximately on par with one another. These use Vathak-specific rules, obviously, but all that you need to run them is included within this module. The pdf does feature copious amounts of read-aloud text, so if generating a proper atmosphere is not your strong suit, this has you covered.

All righty, this being an adventure-review, the following contains SPOILERS. Potential players should jump ahead to the conclusion.

Only GMs around? Great! We join the PCs as they are on the road through the regions where the fell Plague of Shadows once ravaged the lands, towards the former capital of Ursatur, and they are escorting the romni trader (lavishly-illustrated with a stunning artwork) Nuri Brovna, and they’ve been on the road for some time. The pdf does provide a couple of hooks here for your convenience.

Anyways, after a flavorful introductory text, the adventure proceeds to confront the PCs with a cadre of bhriota raiders – these guys attack the wheels, and the module uses an abstraction here, telling you to track the number of attacks executed against the wheels. While I totally get the narrative importance of the state of the wagon, I do think that providing stats for the wagon would have been the more “Pathfindery” thing to do here. It doesn’t negatively impact the adventure, but from an aesthetic point of view, it’s something that bugs me.

After driving off the raiders, the PCs will have a chance to test their skills and problem-solving in a skill-challenge of sorts, wherein they extract the wagon from the raider’s pit. Tracking down the raiders, now or later, to their camp will be appreciated by the locals, just fyi. Arriving at Jelsana, the wagons and PCs are inspected by locals muttering under their breath about diseases before being allowed to enter the village, where furtive and fearful gazes are sent towards the PCs by the funerary-garbed locals. A brief run-down of the village and its movers and shakers is provided for your convenience, and the movers and shakers have small quests for the PCs, which can be used to gain favor with the respective important NPCs.

They may well be invited by the councilor (whose header lacks an “l” – his last name is “Spiel”, German for “game”, not “Spie”…), and while the PCs are waiting for the wagon to be repaired, Spiel will get down to business after a pleasant meal: There is a mass-grave from the time of the Plague of Shadows upriver, and bodies have been exposed by the recent rains. He is looking for folks willing to burn the bodies, just to make sure that they don’t attract ghouls or are washed downriver. At the grisly site, dangerous, massive maggots constitute an optional and nasty fight…

Guard capain Krunedorf has a smuggler-problem, and the smugglers may need some convincing to divulge their methods…but, you know, that smuggler fellow…he looks fit, but he’s sweating profusely…does he have a fever? The local priest, Father Heinrich, is constantly creating new remedies, and testing one and providing feedback may help win him over…though the slightly disturbing method he uses may caution PCs: The medicine includes old human bones…which the smugglers get into town…

All of these quests are a setting of the stage for the main meat of the module: The outbreak! A disease is suddenly there, and it’s quickly dubbed “traveler’s fever” – and the goodwill of the authorities is all that holds back a lynch-mob! The PCs, whether they know it or not, are on a timer – and if they dawdle, they may very well face the need to escape from town in the dead of the night. But the wagon may well not yet be repaired…

The truth of the subject matter can be deduced by various means by the PCs: The bones sold to father Heinrich are harmless, but the flesh that the smugglers removed from the excavated mass grave’s victims…well, it’s not, Sharing this with the public in a convincing manner will see the smugglers burned alive, with a climactic battle purely optional!

Personally, I think this is amazing: The module does not throw yet another tentacle thing as a boss at the PCs, it is a tale of paranoia and violence, of greed and human frailty, and the climax, the burning, can make for a great tonal reinforcement that serves to drive home the themes and feeling of Vathak.

Editing and formatting are good on a formal and rules-language level; I noticed a few minor mistakes, but nothing serious. Layout adheres to Vathak’s amazing two-column full-color standard, and the pdf sports really nice full-color artworks. The module comes fully bookmarked for your convenience.

Okay, veterans of my reviews will have deduced what the one thing is that I don’t like about the adventure. It has no maps. Not for the road-side ambush (okay, we can make those), but also, alas, not for the village and the places within. There is a map for the region, taken from the Vathak-sourcebooks, but that’s it. This means, ultimately, that the village feels slightly less defined than it should be, a bit opaque, if you will. Granted, it is an issue that is easy enough to remedy with the copious amounts of villages and their maps from e.g. Raging Swan Press’ village backdrop-series, but yeah…that’s a downside.

In spite of that, though, I found myself enjoying Landon Winkler’s adventure much more than I expected to. While the set-up and tasks are deceptively simple, they manage to perfectly establish how a Vathak campaign should feel; that it’s not just a high-fantasy world with dark stuff painted on. Instead, the module establishes the leitmotif for the region in a concise manner; it highlights anxieties and opts for a pretty daring conclusion. It is, in short, more courageous than I expected it to be, and does a better job of showing, not telling, the PLAYERS how Vathak works and feels differently. (As an aside: Yes, you can play this in Ravenloft and similar settings with minimal tweaks.)

So yeah, I enjoyed this more than I thought I would! My final verdict for this one will be 4.5 stars due to the minor hiccups and lack of cartography, but I will round up due to in dubio pro reo.

You can get this unconventional adventure here on OBS!

Missed the Ina’oth supplements? You can find the GM’s guide here, the Player’s Guide here!

The massive (and really impressive!) Shadows over Vathak Player’s Guide can be found here!

This is also part of a massive Halloween bundle, which you can find here!