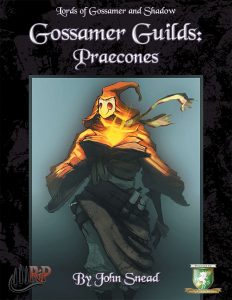 This supplement begins with preliminary notes, written in character by Shanya Talis, which establishes the praecones as wandering bards, storytellers and occasional spies that traverse the gossamer worlds. Membership of the organization is loose, to put it mildly: You need a drive for discovery, the ability to travel the gossamer worlds and a passion for storytelling. Oddly, juggler, acrobats and clowns don’t seem to qualify among the otherwise pretty bard-like praecones (singular praeco, fyi) – according to the teller of the story here, the praecones predate the Dwimmerlaik Wars, but, well – that’s a story in and of itself.

Joining the guild is pretty easy and superbly hard – basically, you have to be a virtuoso of sorts, and then, by talent or by being noticed, have the ability to travel the Grand Stair…and that’s pretty much it. The standard tale is obviously that of a praecox finding a talented teacher of the arts, but countless variants exist. Apprenticeship often lasts several years and both travelling and resident praecones are noted. The guild’s dens/houses are the so-called Storyhouses, which act as a mixture of guild house and information brokerage market place. Praecones that visit a Storyhouse for more than a brief stay are expected to have someone gifted in Wrighting create an Icon, to facilitate quick responses in times of crisis. At the top of the guild’s loose hierarchy are the librarians, who, among other things, use their knowledge to create cartas, you know, partial maps of the vastness of the Grand Stair and the realms beyond. Teachers and additional staff associated is noted, and while few praecones become Wardens of the Grand Stair, Exegesis and Opening and Closing Doors are wide spread among the more experienced praecones.

As befitting a guild of travelers, many use the Open cantrip to travel, and interestingly, the guild seems to take a pretty neutral stance towards the dichotomy of Umbra vs. Eidolon. They also use so-called travel watches, an item whose origin the guild guards – these watches allow for the creation of Doors and record the travels of their wearers. Praecones, loosely organized as they are, don’t really have organization-level foes, and the restriction that they are expected to refuse assassination requests also enforces this. Failure to comply will cause expulsion. Instead of violence, the guild employs its narrative talent and gathered secrets to destroy those that would harm its members.

We get 4 brief adventure hooks for the guild, and item-wise, three types of portable library 82, 5 and 8 points), as well as regular (4 points) and psychic translators. (5 points.)

Editing and formatting are very good, I noticed no undue hiccups here. Layout adheres to the two-column full-color standard of the LoGaS-supplements, and the pdf sports quite a few nice full-color interior artworks of different styles. The pdf has no bookmarks, which constitutes a comfort detriment.

John Snead’s praecones are good news for fans of Lords of Gossamer and Shadows – with some luck, we’ll see more supplements coming out, and when I think back to the Gossamer Worlds series, that makes me excited indeed! That being said, I wasn’t as impressed by this guild as I hoped I would be. It’s the trope of the vast guild focusing on arts, somewhat akin to the Pathfinder Lodge or the Harpers, just on a scale befitting the Grand Stair, down to the items (compass watches with magical properties – sounds a bit like wayfinders…) and the guild’s kinda-benevolent focus. As such, I found myself less inspired by this that I hoped I’d be. That being said, this pdf provides a lot of bang for buck –for just $1.49, you get quite a bit of content, which is why I will round up from my final verdict of 3.5 stars.