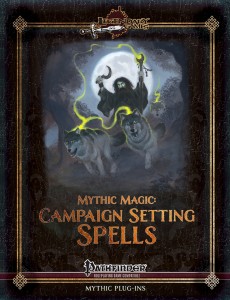 This installment of the Mythic Magic-series clocks in at 52 pages, 1 page front cover, 1 page editorial, 1 page SRD, 4 pages of hyperlinked ToC, 2 pages of introduction, 1 page advertisement, 1 page back cover, leaving us with a massive 41 pages of content, so let’s take a look, shall we?

So, what does this book cover? well, obviously not spells from one big hardcover, but instead spells found in: Animal Archive, Demon Hunter & Dragon Slayer Handbook, Distant Worlds, Faction Guide, Inner Sea Gods, Inner Sea Magic, Inner Sea World Guide, Mythic origins, People of the Sand (& stars) and the rival guide as well as the osirion sourcebook. (The new one, not the 3.X Player’s sourcebook).

Now I can’t cover every spell herein without bloating the book. So I’ll give you a selection. Additionally, I should mention that I do not endorse all spells mythified – indeed, I do consider some of the books from which the base-material for the mythic spells herein not particularly well-balanced. This will have no impact whatsoever on my analysis of the mythic spells herein – I am taking them completely on their own ground. To help orientation regarding source, concise superscript abbreviations help the reader’s orientation. As always, if you do not have the books this is based on – fret not, for the spells herein tend to show up on the respective SRDs and sites like the useful archives of nethys. Got all of that? All right, then let’s dive in!

The anti-summoning shield, for example, can have its summon-failure chance enhanced by 5% x mythic tier and, as an augment, be cast as an immediate action. Rolling craft twice per day when utilizing arcane reinforcements also can be considered a nice trick up one’s sleeve – crafting two items at once can be pretty powerful, especially when used for magical items. Of course, plenty of spells deliver solidly scaling numerical escalations based on mythic tier and mythic power, but that is a given at this point in the series. More interesting, at least to me, would be enhancements like Baphomet’s blessing now also granting the powerful charge ability and immunity to maze-spells.

When a mythic version of a monster or spell manages to actually render a base version more flavorful, more exciting by expanding the very concept of the base version into something more unique – that is when mythic rules shine in my book. From a rules-perspective pretty impressive would be Blade Snare -with increased benefits, interactions with non mythic creatures and weapons etc., the base version is beautiful. While the nitpicky guy in me wants to complain about a missing minus-sign in the augment-section of the spell, the option to maintain the snared weapon and even snare 1/2 mythic tier weapons at once for 2 mythic power makes for a pretty damn neat option.

Terrain-control via Brittle Portal, instant mythic mummification via canopic conversion and curse based control as an augment to the creation of such mummies make for rather iconic options that can be used for narrative purposes as well – not only do mummies freed from such a control gain free will back, they also receive a rather nasty buff. Can I hear mummy-revenant crossovers approaching? Yes, I can.

Channel vigor’s flexibility is also pretty nice, with unique effects depending on the limbs into which you channel the effect. Other modifications are small, but still flavorful – adding blightburn sickness to cosmic rays? Heck yes! Discharging dazzling flashes to blind adversaries would also be a rather neat option. Diverse additional options, both in the regular mythic spell’s text and the augment option of deadeye’s arrow also provide some neat bonuses and added condition-penalties. While everyone who regularly follows my reviews knows that I’m not a big fan of detect spells, at least detect demons receives a pretty unique augment that turn demonic auras clearly visible, helping against foes shrouded in deceptive magic et al.

The defensive excellent enclosure is also pretty interesting in its concise interaction with other spells – the various effects of mythic geniekind also fit thematically seamlessly and organically within the context of the base spell while increasing its potency by means of added spell-like abilities depending on the geniekind chosen. The increased incremental control of fractions of heal and harm also can be considered a pretty cool way of tackling the base spell’s concept and making it more flexible. Now this is a very personal preference, but the augment to make the mythic ghoul pack summoned by the spell of the same name subject to haste fit thematically very well within the frame of my own conceptualization of ghouls.

The low gravity options added to the cool gravity sphere should also be mentioned. Now personally, I consider the temporary dexterity penalties imposed by the mythic gravity well slightly less interesting than the concept deserves, but that may just be me really liking. Now perhaps it’s due to my favorite in-game card-game being Tarokka or due to the superb “Harrowing” module by Crystal Frasier, but the spell never clicked with me and the relatively conservative card-discarding/numerical escalation of the mythic variant, alas did not change that. Now where things turn interesting once again would be with imbue with flight – the option to utilize mythic power to make objects of huge, gargantuan and colossal size to fly, including the option of sharing the mythic power required, ritual-style, between characters. It’s a small thing, but a glorious one that resonates well with quite a bunch of cool fantasy tropes.

Interplanetary teleport now does feature several benefits for its augmented version, helping you survive in less than hospitable environments. Orchid’s Drop now allows for the free allocation between regular and ability score healing – pretty sweet. Speaking of pretty sweet changes – shared sacrifice not only has its casting time decreased, it also does not end with the target moving outside of the area of effect, instead being suppressed to kick in once the target is in range again. Siphon spell also receives a nice upgrade that lets you roll twice on dispel checks and continues until you have siphoned a minimum amount of spell levels, with the high-level augment allowing you to ignore the cap at the significant investiture of mythic power – cool! Spawn Calling is also rather epic – why not call the tarrasque or another spawn of Rovagug instead of the Star-spawn? Summon the tarrasque. Yeah. Awesome. In a nice bit of synergy, summon accuser ties in with Mythic Monsters: Devils, but also provides a nice alternative. Sustaining Legend feels a bit strong, with healing and condition negation/decrease added to targets using mythic power in any shape way or form, but that may be me.

More deadly teleport trap may be nice, but transfer tattoo is imho more interesting – you can essentially store an inoperable tattoo with this for some time – can you see the narrative potential? “Your task is to bring the tattoo of power to the missing grand master…” Face theft via transplant visage has also not been this nice for a long time… Well, that came out wrong…

Vision of the Beast Mother‘s mythic version makes followers of Lamashtu much more fearful…why, you ask? Well, what about sending other spells along with the nightmare? Yep, really, really nasty and once again sporting quite an array of cool story-telling options.

Editing and formatting are good, though quite a few minor typos and various superscripts that have not been superscripted slightly mar an otherwise well-edited book. The pdf adheres to legendary Games’ two-column full-color standard and sports numerous gorgeous full-color artworks. The pdf comes fully bookmarked for your convenience, though oddly, once again, we have additional out of order bookmarks in the beginning, this time duplications of two spell-bookmarks. Since this does not impede functionality in any way, I will not hold that against the pdf.

Okay, after having reviewed 6 Mythic Magic-pdfs by now, I can somewhat fathom how Jason Nelson must have felt: While design is fun, doing so many mythic spells might also be considered one thing: exhausting. This must have been serious *work* – that being said, I can see another thing about this pdf: In spite of the vast amount of mythic spells before these, there still are simply unique tricks herein. A lot of them, actually. More so than I expected to find herein.

While one can see that, unlike in the great mythic magic installment for the APG, this is the work of one designer, the job Legendary Games’ chief has done is not only thorough, it is more varied and interesting than one would expect. When it would have been easy to just phone in augments to spells like detect demons or duplicate and recolor spells à la “works like this, but with acid”; when formulaic numerical escalations would have been the easier route, this instead goes the extra mile by providing unique little tidbits to enhance the flavor of the spells. Not all are winners, but in the face of this many spells, that should be no surprise; the quote of cool and imaginative spells is definitely much higher than I anticipated, though, and thus, this can be considered a superb offering. While slightly below the superb APG-installment, this still is one of the best of the all-but-required mythic magic-pdfs; my review will hence clock in at a final verdict of 5 stars + seal of approval, in spite of the small glitches here and there.

You can get this great resource here on OBS and here on d20pfsrd.com’s shop!