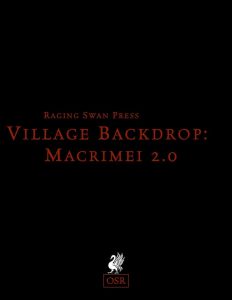 Now, the lore and flavor, the writing – is top tier. This being an expanded version of a shorter pdf originally released for PFRPG. It also provides new material in pretty compelling ways. To be more precise, we get the usual expansion pertaining the surrounding locality, the law of the land, customs, etc. Dressing in particular is remarkable: For example, the dressing/event table sports 20 entries…but the pdf goes beyond that, providing some smaller sub-dressing suggestions for visits to certain keyed locales. We also get well-written fluff-only write-ups for NPCS, 5 to be more specific – these reference wizards instead of magic-users, so if that bothers you, consider yourself to be warned.

The artifact, the Orb of Soryan is still here, but unlike the botched 5e and PF2-versions, it actually works in a pretty smooth manner, getting old-school rules functionally right, and using a no-frills roll-under mechanic to activate. Nice! Minor nitpick: Destruction caveat would have been nice, but oh well. It also references caster level, which might upset some purists.

Editing and formatting are formally good, and slightly weaker when it comes to rules. Layout adheres to RSP’s smooth, printer-friendly two-column standard and the pdf comes with full bookmarks as well as a gorgeous map, of which you can, as always, download high-res jpegs if you join RSP’s patreon. The pdf comes in two versions, with one being optimized for screen-use and one to be printed out.

And I do enjoy this OSR-version, in spite of it being almost system neutral – it’s my firm conviction that this would have benefited from a few added OSR-stats here and there…they don’t take much time to make and don’t take up much space, so that would have rendered this pretty much a book you can simply pick up and play. That being said, this iteration does not share the issues of the 5e and PF2-version, and is the first iteration of Macrimei for old-school games…and frankly, considering that, I maintain that this is very much worth getting if you remotely enjoy sword & sorcery. My final verdict will clock in at 4.5 stars, rounded up due to in dubio pro reo.