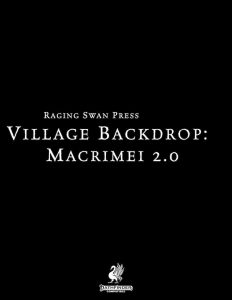 Now, the lore and flavor, the writing – is top tier. This being an expanded version of a shorter pdf originally released for PFRPG. It also provides new material in pretty compelling ways. To be more precise, we get the usual expansion pertaining the surrounding locality, the law of the land, customs, etc. Dressing in particular is remarkable: For example, the dressing/event table sports 20 entries…but the pdf goes beyond that, providing some smaller sub-dressing suggestions for visits to certain keyed locales. The pdf also features well-written fluff-only write-ups for NPCS, 5 to be more specific, but if you expected new attacks or abilities for some of the unique creatures herein, you won’t find that.

The PF2-iteration has been properly adjusted rules-wise regarding skills, etc., though using the (critical) success/failure paradigm of PF2 in e.g. the rumors would have been a nice touch.

The artifact, the Orb of Soryan is still here, but is a total mess in how it is presented in PF2: No Bulk, no proper Activate line, no proper traits. A total mess from a rules-formatting and -integrity perspective.

But this PF2-conversion feels phoned in.

I get that the multi-system realities of the series mean that its installments tend to gravitate to the rules-lite side of things, but the messed-up artifact is pretty bad. I do think that each installment would benefit from trying to be a bit less system agnostic to make the different iterations account more for the realities of their systems, so I do LIKE that we get a proper artifact here…or I would, if it had been properly realized. It could have been a cool selling point for PF2, but ends up being the opposite, emphasizing that this is a linear conversion that doesn’t use the new and exciting possibilities of PF2 to the degree it could. My final verdict can’t exceed 3 stars.