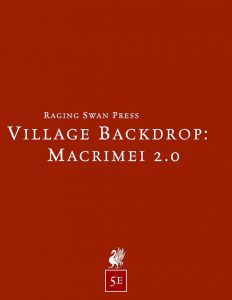 Now, the lore and flavor, the writing – is top tier. This being an expanded version of a shorter pdf originally released for PFRPG, it also provides new material in pretty compelling ways. To be more precise, we get the usual expansion pertaining the surrounding locality, the law of the land, customs, etc. Dressing in particular is remarkable: For example, the dressing/event table sports 20 entries…but the pdf goes beyond that, providing some smaller sub-dressing suggestions for visits to certain keyed locales. We also get well-written fluff-only write-ups for NPCS, 5 to be more specific – these reference the proper default stats. Somewhat to my chagrin, the set-up SCREAMS lair actions or legendary actions to be added at least to one of the NPC’s statblocks – this was not done, missing a chance to make this more compelling in 5e.

The artifact, the Orb of Soryan is still here, but makes a pretty big mistake, in that the grand failure of proper activation, which is insanity, is not properly implemented regarding 5e’s perfectly fine madness rules. The artifact’s rules are also a total mess: Spellcasting granted not properly presented, and the feat it references? Does not exist in 5e. There is no “Alertness” feat – it’s called “Alert.” Its formatting is also really off regarding an artifact.

In case my ample allusions to the genre-classics were not ample clue: This village is a perfect bow before the tropes of Swords & Sorcery, a village dripping flavor and atmosphere out of every pore; just as useful in a post-apocalyptic scenario, Macrimei is a fantastic village that manages to evoke the primal sense of the ancient, of decay and ages long past with panache and prose so concise and dense, you feel like you could cut it. While it could just as well be tinted through the shades of high fantasy, unlike most sojourns into the genre, I’d strongly advise against that, for this village backdrop GETS what makes Sword & Sorcery so amazing – it’s neither flowery prose, nor the themes…it’s the room for growth, for question-marks, the precarious balance of blanks and filled-in information, the tone.

But this 5e-conversion feels phoned in.

I get that the multi-system realities of the series mean that its installments tend to gravitate to the rules-lite side of things, but from the snafu with madness to the messed-up artifact, this feels like a very low-effort 5e-take on the subject matter, where the material SCREAMS for at least a bit of love for unique abilities of the village’s overlord.

I do think that each installment of the series would benefit from trying to be a bit less system agnostic to make the different iterations account more for the realities of their systems, so I do LIKE the fact that we get a proper artifact here…or I would, if it had been properly realized. This could have made some really cool use of some of 5e’s features, and do so without much hassle. It didn’t, instead providing a mostly system-agnostic version that gets the few system-specifics wrong. The stellar concept and prose deserved better.