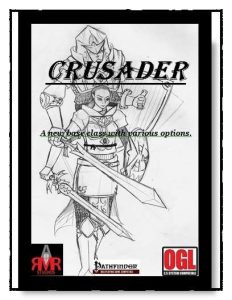 This base class clocks in at 10 pages, 1 page front cover, 1 page editorial, 1 page SRD, 1 page back cover, leaving us with 6 pages, so let’s take a look!

The crusader begins play with a so-called shade, the remnant of a famous hero that guides the crusader via telepathy and in the dreams of the character. The shade may attempt to communicate with other creatures, but doing so negates all crusader class abilities for 24 hours, making it a sucky base fighter sans bonus feats etc. for that duration. This shade ties into the guiding combat mechanic. At 1st level, the crusader may enter a trance as a move action, which allows for an offensive or defensive stance. A defensive stance yields +1/2 class level (minimum 1) to AC and Ref-saves, while the offensive stance yields that bonus to CMB and melee/ranged weapon damage rolls. Stances may be changed as a move action. The ability lasts until combat ends (enter here my long rant on how per-encounter abilities suck, make no sense in game and need a precise time measurement here). This ability may be used once at 1st level and an additional time every three levels tehreafter.

2nd level yields + Wisdom modifier to initiative (not a fan and keep that far away from mythic gameplay…) and also +1/2 class level to all Knowledge checks, allowing them to make them all untrained. This is somewhat problematic, as RAW Knowledge (local) of even the most obscure region suddenly works. 3rd level nets uncanny dodge and 8th level provides improved uncanny dodge.

Guided knowledge is can 1/day net you a bonus equal to 1/2 class level + Wisdom modifier to a skill check, with an additional daily use every 3levels thereafter. The ability specifies that it’s gained at 6th level, while the table stipulates 3rd level – so, which is it? NASTY glitch. Starting at 5th level, the crusader may choose one weapon he is proficient with each day and gain +1 to atk and damage for that day, which increases by a further +1 at 11th and 17th level.  Starting at 11th level, the crusader may switch the weapons to which this benefit applies as a swift action Wis-mod times per day, minimum 1. 14th level crusaders may always act during a surprise round and as a capstone, he gains both offensive and defensive bonuses when using guided combat and is always treated as flanking a foe.

Now, there are a total of 4 different types of shade included in the deal – these, beyond flavor, influence a grand total of one ability – guided strike, which is gained at 4th level and may be used 3 + Wis-mod times per day – until that point, you have basically zero choice, zero player agenda in the chassis. These guided strikes…could use some clarification. Can guided strike only be used during guided combat? I assume no, but then again: The ancestral shadow’s ability for guided strike lets the shade attack for as many attacks as the crusader rained down upon his foes in the full-round action preceding it. Granted, it only works for full-round actions, but the damage output here is rather low due to a lack of buffing options for most other campaigns. You have to roll twice as many dice with not that significant chances of mattering, which further bogs down gameplay, so not the biggest fan here. Each shade also comes with a linear array of guided strike abilities, which are gained at every even level after gaining guided strike – 6th, 8th, etc. These include iterative attacks for the base ability, Hammer the Gap (not properly capitalized and a really opaque mess: You are supposed to add up damage before applying it to DR – got ya. Only the crusader’s? Or also that of the shade? The ability also refers to the base ability by the wrong name, in a needlessly complicating hiccup.

The Feral Shade has basically the Vital Strike, standard action based version of the guided strike ability – which means that it’d see much more use in my games. Big plus: The strikes of the shade actually become magical this time around. The Noble Shade can use standard actions to attack roll twice and take the better result, though if it’s a threat, the second roll is used as the crit confirmation, keeping things in check. Here, we actually get Vital Strike etc. feat-chain-wise as bonuses, though once again, formatting of feats deviates from the standard. Finally, the stalwart shade,c an, as a standard action attack and gain a +2 AC bonus until his next turn. This increases, but the wording falls apart once it is unlocked for full attacks. You see, the base ability ties the bonus granted to the attack…and the 6th level upgrade makes that +3 for a standard action single attack. When using it in conjunction with a full attack, that is lowered to +2…okay, got that. But does the crusader get the bonus for each attack in the full attack? The bonus granted is dodge and that stacks with itself. The other options provide swift aid another, bonuses to saves, etc.

Editing and formatting are not perfect on either a formal or rules-level; I noticed several formatting issues and the table/ability-discrepancy is a big no-go. Layout adheres to a printer-friendly 2-column b/w-standard and the pdf sports some nice, hand-drawn b/w-artworks. The pdf has no bookmarks, but doesn’t need any at this length.

Angel “ARMR” Miranda’s Crusader base class is interesting – though its name is grossly misleading – this class has exactly nothing to do with religious wars or anything like that. The biggest issue of the class would be player agenda – it has exactly one meaningful choice, at 4th level – 1st – 3rd level crusaders are all the same. Worse, each shadow locks you into a none-too-efficient progression of abilities. Don’t get me wrong: I *like* the concept very much; the visuals are cool and full of roleplaying potential. But the class feels a bit unfocused; the knowledge from beyond angle, the eternal training companion shtick, has been done before and better. The Living legend archetype by Dreamscarred Press in particular knocks this straight out. That being said, while I don’t like the execution and think it seriously needs choice, better shades and a more profound impact of shades on how the class actually plays, the pdf does offer some concepts that a talented designer or GM can easily homebrew into something unique. Hence, and due to the PWYW-nature of the class, I will settle on a final verdict of 2.5 stars, rounded up for the purpose of this platform.