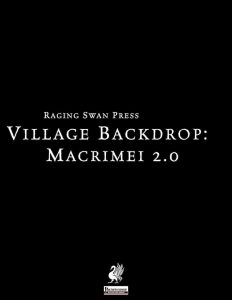 Now, the lore and flavor, the writing – is top tier. The expanded version also provides new material in pretty compelling ways. To be more precise, we get the usual expansion pertaining the surrounding locality, the law of the land, customs, etc. Dressing in particular has been properly expanded: For example, the dressing/event table, which has been extended to 20 entries…but the pdf goes beyond that, providing some smaller sub-dressing suggestions for visits to certain keyed locales. The 2.0-version also features well-written fluff-only write-ups for NPCS, 5 to be more specific…but there are also less pleasant things to report: The original did sport a full settlement statblock, which was cut in a puzzling decision – and the same goes for the two perfectly serviceable statblocks featured in the original. The artifact, the Orb of Soryan is still here, but is now presented in plain text as opposed to in its own sidebar – which is just an aesthetic decision I wasn’t too keen on. Having its CL etc. on the next column, separated from the write up, also rather disappointed me.

I seriously LOVE John Bennett’s Macrimei. But the 2.0-revision left me remarkably cold regarding its new material – it primarily provides some minor quality of life improvements, but cutting of perfectly fine material strikes me as strange. If you already have Macrimei’s original iteration, I’d strongly suggest skipping this one; in fact, depending on how you value stats vs. fluff, you might consider the original to be the better choice. Don’t get me wrong: The flavor is still fantastic, and I really liked the new fluff-stuff as well, but as a whole, I expected more from this. My final verdict can’t exceed 3.5 stars, rounded up due to in dubio pro reo, and because I can’t bring myself to round down for it.

The original version can be found here!

You can support Raging Swan Press here on patreon.