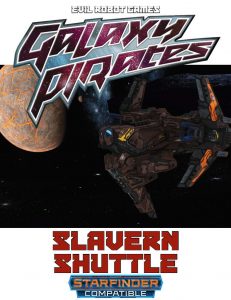 This installment of the Series of pdfs that provides fully operational spaceships for your SFRPG-game clocks in at 13 pages, 1 page front cover, 1 page editorial and SRD, leaving us with 11 pages of content, so let’s take a look!

This review was moved up in my reviewing queue as a prioritized review at the request of my patreon-supporters.

After the awesome and massive frigate, we have a regular-sized ship type this time around, which comes, as always, in multiple different iterations. The base shuttle is a tier 1 Small shuttle with S6 thrusters and an Arcus Light power core. The ship has a basic computer, signal basic hyperdrive, an cut-rate sensors – but it does have mk3 armor and mk1 defences, and features three light laser cannons – two (non-inked) forward facing, one on the turret. Unless I miscounted, it has a little bit, but not much left in its BP-budget, which makes sense and allows potentially for minor modifications.

The slavern gunship builds on this for a tier 2 variant. EDIT: Previously missing bolding was added. Kudos for fixing that! The primary difference here would be an upgrade for the power core, which is increased to Pulse Brown – and promptly used to fuel two non-linked chain cannons, which replace the forward-facing laser cannons. The vessel maxed out its BP-budget, which I can appreciate particularly for specialist ships.

The tier 3 slavern raid leader transport is powered by a Pulse Gray power core, which fuels S6 thrusters, the ship features forward-facing fire-linked chain cannons and a turret with a high explosive missile launcher. With mk 5 armor, basic 30 shields and mk3 defences, but only cut-rate sensors and a basic computer, common crew quarters and cargo hold expansion bays, the design of the ship (which makes good use of its BP) oozes “raiding vessel.”

The fourth ship is actually not a slavern ship per se, but a turan shuttle they managed to obtain. This one clocks in at tier 5, powered by a Pulse Black power core, and equipped with S8 thrusters and a signal basic hyperdrive. While we have mk 6 armor and mk 5 defences, the ship shows its different makers in pretty much every aspect of its design: It has a mk 2 duonode computer, and its expansion bays feature only one cargo hold, but do come with medical bay and escape pods. The crew’s lives are more important here, and it also shows in the presence of good crew quarters, basic medium-range sensors, light 70 shields, and biometric locks. Offense-wise, we have two non-linked light plasma cannons on the front, and a third one on a turret. Turan efficiency is also represented by the use of BP here – unless I miscalculated, the entire BP-budget’s been used.

The variants provided include notes on famous crews for each variant, as well as lore-tables that list sample DCs for Computers checks so that players that do their legwork actually know what they’ll be up against. Also nice: The write-ups list sample creatures/cargo that they might be carrying – oh, and in case you were wondering, the pdf does explain the modus operandi of a slavern raid in a pretty cool piece of flavorful introduction. The supplement comes with the paper-stand mini-style print-out page, and a pretty darn impressive 2 pages that depict the vessel in gorgeous full color from both front and back. We also get a really neat and aesthetically-pleasing map-version of the interior of the vessel in full color, noting its sections. And no, I’m not complaining about map-labels! Why? Because the ship comes with a VTT-friendly jpg-version of the map that is 100% player-friendly. Kudos!

EDIT: In the first iteration, one of the pre-filled ship sheets (which are super handy as handouts for players!) was incorrect; this has been rectified immediately. Kudos for the swift fix!

Editing and formatting are very good on a rules language level and on a formal level. Layout adheres to the series’ two-column full-color standard, and the artworks and maps for the ship, both in full-color, are STUNNING. The pdf has no bookmarks, but doesn’t need them at this length.

Paul Fields and Jim Milligan deliver yet another cool installment in the series. With a couple of tweaks, starship combat can be super-fun, and after a few hiccups at the start, I’ve made it work in my game rather well. However, I a) don’t have the time to stat X starships, and b) SUCK at drawing at cartography. As such, this series has been a huge boon for my game, and the convenience offered alongside the cool maps always make these pdfs a welcome addition.  The addition of a player-friendly VTT-jpg is yet another plus for the series. EDIT: The updated pdf gets rid of my complaints. As such, I consider this now to be well in the region of a 5-star pdf. Kudos to the Evil Robot crew for the swift fix/update!

You can get these ships here on OBS!

Missed the amazing, and massive frigate? You can get it here on OBS!

You can support one of the authors here on patreon!