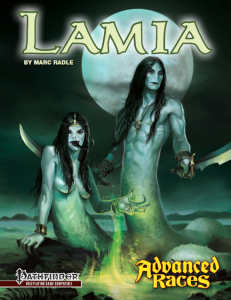 This installment of the Advanced Races-series clocks in at 17 pages, 1 page front cover, 1 page editorial, 1 page advertisement, 1 page SRD, so let’s take a look at the remaining 13 pages, shall we?

We kick this off with an interesting insight into the highly matriarchal culture of the evil lamia and an accompanying piece of in-character prose – turns out that male lamia, marginalized though they may be, do exist – as do those rare lamia that leave the cruel, hedonistic ways of their kind behind. Better yet, we also learn about so-called false lamias with non-serpentine lower bodies…and unlike many Advanced Races installments, age, height and weight tables are provided!

So what do these creatures get racial trait-wise? Lamia receive +2 Str and Cha, -2 Int, base speed of 30 feet, climb and swim speeds of 20 feet , +2 to intimidate, +2 to saves against mind-influencing effects, may not be tripped (but also receive no feet-slot), darkvision 60 ft. and low-light vision, +2 to bluff and use magic item [sic!] – should be Use Magic DEVICE checks, SR 5+ class level (I assume that should be character level), get proficiency with scimitars and may 1/day use ventriloquism and charm person as a spell-like ability.

They also come with nice favored class options for fighter, oracle, ranger, rogue, sorceror and witch and a total of 8 alternate racial traits. Personally, I think the ability to use constrict is too powerful for the paltry intimidate skill-bonus trade-off. On the plus side, a properly phrased primary bite attack with minor bleed damage is nice. Even dealing 3/day wisdom-damage via a touch feels justified – so apart from my pet-peeve with constrict, nothing downright broken here.

The racial feats, of which we get 6 allow a lamia to speak with snakes, upgrade the 1/day spell-like abilities, their intimidate prowess or summon snakes via spells – generally, solid options mostly interesting for the fluff rather than the mechanics. Speaking of which – did you know about the revelry?

It’s essentially a debauched festivity of their culture held at full moon to honor the moon and its influence on lamia culture – and as such, it is no surprise that we get a moon mystery for lamia oracles. A moon mystery? I was ready to start yawning at yet another one of these, but this one actually has interesting mechanics – blasts of non-lethal damage, exposing lycanthropes, creating moonlight bridges, intentionally untyped blasts of pure moonlight, flight – quite a lot going on in the interesting revelations here. The new spell, river of moonlight, also features some iconic imagery that fits the theme.

The 10-level Moon-Touched PrC comes with d6, 4+Int skills per level, full spellcasting-progression, 1/2 will-save progression and 1/2 BAB-progression. Rather nasty – the first level ability allows them to add metamagic feats and their effects to spells they cast without increasing spell-level (with a nice no-beyond maximum-caveat) cha-mod times per day – especially for quicken spell and spell-level intense metamagic feats, this is rather powerful, but on the other hand, it somewhat validates the choice of the respective feats, which otherwise would be considered subpar as a choice. Still, especially for campaigns that allow a lot of material, a DM may wish to have a close eye on this one – it *can* be broken. It should be noted that the PrC’s other abilities are rather cool as well and less powerful, though – the 7th level auto-daze on crits via spells is interesting, as is the fast healing capstone while the moon is visible.

That’s not the only 10-level PrC, though – Serpent Blades are 4+Int skills per level, d10, full BAB-progression, all bad saves, are masters of two-handed combat that receive scaling bonuses to AC while making full attacks, receive dual-weapon bonus feats from a list galore, further reduce the penalties of the fighting style, may increase the DC of her charm person via a special dance, add damage to AoOs and the highest levels, make free maneuvers when hitting foes with both weapons or impose dread penalties of foes hit with critical strikes.

The final page offers us insight on Lamia within the context of the Midgard Campaign Setting.

Conclusion:
Editing and formatting are very good, I didn’t notice any significant glitches. Layout adheres to Kobold Press’ beautiful full-color two-column standard and the artists deserve special mentioning – with the notable exception of one artwork, Guido Kuip, Claudio Pozas, Marc Radle and Brian Syme not only provide a unified style, but artworks stunning and on par with the best in the industry – this is a beautiful book indeed.

Marc Radle is a talented designer and in the Advanced Races-series it shows once again – the series has so far been a very good gage of the capabilities of the respective designers and I’m happy to announce that this book ranks among the best – both in fluff and crunch. The imaginative potential and fresh takes here are simply awesome, with Marc Radle delivering enough oomph for me to really want a bigger book on these guys. And that’s saying something. Now I feel obliged to mention that *personally* I think the Lamia are a tad bit too strong due to what I call “Ability-inflation” – do they really need those +2 skill-bonuses? Really? Why not make them alternate racial traits? Why instead bloat the race with those small things? Their movement and perception superiority already is rather pronounced… That being said, while I consider them slightly stronger than e.g. aasimar or tieflings, the social stigma should take some getting used to and the bloat is rather contained. I won’t allow these in-game for my players unless in a high-powered game, but calling the race OP would also be a disservice. The race is strong, but not necessarily broken.

Now the supplemental content also deserves special mentioning, mainly because it’s one of the best in the whole series – the new rules-mechanics are cool, the writing is crisp and while the options are powerful, they are not broken.

How to rate this then? Well, the fluff is a glorious 5 stars + seal of approval, the crunch may be a tad bit too strong for more conservative groups, who should consider this a good file instead, at 4 stars. My final verdict will clock in between these at 4.5 stars, rounded up to 5 for the purpose of this platform.

You can get this neat installment of the Advanced Races-series here on OBS!