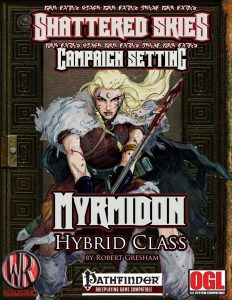 The myrmidon class depicted here gets d10 HD, 2 + Int skills per level and proficiency with all simple and martial weapons as well as all armor and shields, including tower shields. Chassis-wise, we get full BAB-progression and good Fort-saves.

The myrmidon’s defining class feature would be exclamations -basically the talents of the class, with one gained at 1st level and another one at 2nd level and every 2 levels thereafter. If required, a save is based on DC 10 + 1/2 class level + Intelligence modifier. The target needs to see, hear or smell (weird!) the myrmidon to be affected by an exclamation, but does not need to share a language with the character. Unless otherwise noted, an exclamation is a standard action to use.

So, what do these exclamations do? Well, they basically are martial, hex-like abilities that have limited daily uses. These include 1/day temporarily gaining a combat feat for which she meets the prerequisites. We can also find cure light wounds (scaling up to cure moderate wounds as an extraordinary self-only ability, with CL = character level and, thankfully, a hard, daily cap of uses. There is also an exclamation, which represents a curse that lasts for 3 + Int-mod days – when the target is healed, the caster needs to succeed at a CL-check, otherwise the last 10 points simply are not healed. At 5th level, this also imposes a penalty on saves versus diseases and poisons contracted from injury. Cool concept, if a bit wonky in its presentation – you usually describe the effect first, then the parameters. Unfortunately, I have no idea how this exclamation works. It has no range, no note on how you use it. Standard action, sure…but what’s the range? Touch? Sight? 30 ft.? The flavor-text makes it sound like the myrmidon has to defeat the foe, so is it activated upon reducing foes to 0 hp?

Improving the attitude of an animal of humanoid within 30 ft. is nice…but it’s not mind-influencing, has no negative repercussions for miss-use and oddly only lasts Int-mod rounds, which would make all but fast Diplomacy to avoid escalation not an option. The myrmidon may choose combat feats instead of an exclamation. As a whole, I get the idea here: There is, for example, a cackle hex variant that instead affects the exclamations of the myr-midon[sic!]. However, in the details, there are some rough edges. Let’s take dazzling groan, a pretty simple operation: You get Dazzling Display sans meeting the prerequisites – which is Weapon Focus. A feat you require to use Dazzling Display – instead, the exclamation ties this to weapon groups chosen via weapon training…which is a valid decision per se. However, a weapon group is only gained at 5th level, which means that, at lower levels, this does nothing – it should have a minimum level. There is also a duplication of a 60 ft.-range doom (not italicized, like many a spell-reference) – and it’s Ex, which can be considered to be slightly problematic, considering the infinite uses.

Similarly penalties that apply on even a successful save are problematic for an infinite use ability. There is also an exclamation to keep a creature from drawing weapons – which should probably be a mind-affecting compulsion. A variant of misfortune can similarly be found. Starting at 10th level, booming exclamations may be chosen – the formatting is inconsistent here, as in the weapon group summary, both of which sport sub-abilities that have not been italicized. The wording is not always perfect – “Once per day equal to her weapon training bonus” could have been phrased more elegantly, for example.

Beyond these exclamations, the myrmidon begins play with the ability to keep functioning as staggered while below 0 hp, gaining an untyped bonus to Intimidate while thus wounded. 2nd level provides a variant bravery that also is applied to mind-affecting effects, increasing the +1 bonus every 4 levels after that. 3rd level yields armor training and Endurance as a bonus feat. As mentioned before, 5th level yields weapon training,

7th level provides the first Heart of the Hero ability – which looks like it would allow for a choice of sub-abilities, when in fact, there are distinct, linear abilities – the meta-header is wholly unnecessary. This sequence of abilities include Heroic Recovery at 7th level, Heroic Defiance at 9th level, both with scaling uses. 11th level provides the option to get quickly recuperate from the fatigued condition. Problematic: Losing fatigue by being subjected to healing. 13th level provides stalwart. The fatigued condition elimination fails to properly interact with the 15th level ability: Exhaustion is reduced to fatigued…which then requires a slightly longer rest. The pdf does not specify how this interacts with the cure-options, though. 17th level yields the ability to roll twice whenever the myrmidon tries to recuperate from an ongoing effect. As a capstone, we get immunity to mind-affecting effects.

The pdf closes with a new feat, Verbal Combatant. This nets a character an exclamation with a save DC of 10 + Int-mod.

Editing and formatting are okay on both a rules-language and formal level – I noticed glitches and hiccups in both, but not to the extent of earlier Wayward Rogues Publishing books. Layout adheres to the nice two-column full-color standard and the pdf uses solid stock art. The pdf has no bookmarks and also does not allow cut-copy-pasting text from it, which constitutes a serious comfort detriment when using the pdf.

Robert Gresham’s myrmidon, let me state that clearly, is better than his earlier hybrid classes. It has a moderately unique angle and while it sports several hiccups in the details, it does generally have some decent ideas and can work. Not all abilities are as precise as they should be and ultimately, the exclamations could have used more unique abilities – the witch-based ones are decent when they work, but action-economy-wise, the standard action use means that the myrmidon has to choose between exclamations and full attacks. The class also feels a bit weird in actual play, feeling a bit unfocused. Compared to the hellion hybrid class, for example, the witch-aspect, apart from the engine stand-point, is thematically not really there. Is the myrmidon bad? No, but it features some glitches and does not really offer something truly amazing to set it apart. In the end, my final verdict will thus clock in at 2.5 stars, rounded up to 3 due to in dubio pro reo.