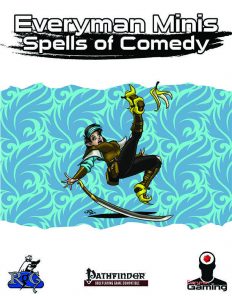 This Everyman Mini clocks in at 7 pages, 1 page front cover, 1 page editorial, 1 page advertisement, 1.5 pages of SRD, leaving us with 2.5 pages of content, so let’s take a look!

As always, we begin with a bit of supplemental material after the introduction, which, this time around, would be the Tricky Spell metamagic feat, which increases the spell level in question by two: In short, the feat lets you make a dirty trick attempt against ALL targets of the spell in question, substituting caster level for BAB and governing spellcasting attribute for Strength. Feats that enhance dirty tricks apply here as well, but only creatures you either hit or that have failed their saving throw are affected. All creatures targeted by one spell share the same dirty trick effect. I like this feat, though personally, I’d value the flexibility Dirty trick offers higher, at +3 spell levels, considering the less flexible metamagic feats that occupy a precious feat slot and add similar debuffs.

All righty, so what do the spells do? At 1st level, banana slippers enchants fruit peels to wrap around the target’s feet, making the area more slippery. Movement may render the target prone, though slowed movement and Acrobatics d help a bit. There is a 2nd/3rd-level mass-version included. The second level spell (3rd for the psychic/witch) gibber imposes a penalty to Charisma-based skill checks and Charisma checks as well as a 20% spellcasting failure chance for spells or abilities with verbal components. This “wastes the target’s action and any uses of the ability” – I assume this means that the action used for the ability/spell and that the spell in question is expended when failing thus. The wording here, while solid, made me twitch a bit. There is a mass-version at one spell-level higher. Dutiful doorkeeper is a level 1 spell that enchants a door, box, etc. – any attempt t open it is thwarted, with the hand attacking (using CL + governing spellcasting attribute) and inflicting CL times 1d6 force damage (max 5d6). Weird: The hand can attack at range, but has no maximum range. At 1 hour per level, it is a VERY potent option for low level casters: Enchant a box/door and wait – lots of force damage there. While the spell has a passphrase, I think it should have a range for its attacks and since its strikes creatures adjacent to the opener, it can be weaponized weirdly and also imho should have a means to Disable Device it. Not the biggest fan here.

Illusory trio generates basically a figment of three stooges-like comedians that hamper Perception of those nearby and opposed skill checks as well as concentration of nearby casters. Pie projectile is a level 1 ranged dirty trick, again, using the CL and governing spellcasting attribute substitution, but may only generate the blinded condition. Odd: The rules-language, while not that different from other dirty trick-based options, reads a bit wonky in one sentence: “Attempt a combat maneuver check to make a dirty trick attempt against the target…” – cosmetic, sure, but it sticks out when compared to the other spells. Finally, the third level spell (4th for sorc/wiz) production of endless pies generates up to CL pies, which are held as a charge and may be thrown as an attack or full-attack action, with new pie-creation being a free action. The reference to the previous spell is not italicized properly, but the interaction with haste works. Fyi: No flurrying etc. with the spell.

Editing and formatting are very good, I noticed nothing too jarring. Layout adheres to Everyman Gaming’s nice two-column standard with a white background. The full-color artwork included is neat. The pdf has no bookmarks, but needs none at this length.

Luis Loza’s spells of comedy are pretty complex for the concepts they attempt and manage to get the required rules-language mostly right. That being said, the focus lies clearly on dirty trick-spells – the pdf focuses pretty strongly on this one rules-concept and does so pretty well, but this also makes the pdf a bit more limited than I’d have liked it to be. The production of endless pies engine of rules-language is pretty impressive, though, and can easily be scavenged and adapted, making that one of my favorites herein. This pdf is not necessarily a must-have, but it is a fun, humble and nice little offering – hence, my final verdict will clock in at 4 stars.

You can get these interesting spells here on OBS!