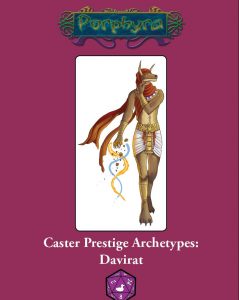 This installment of the Caster Prestige Archetype-series clocks in at 7 pages, 1 page front cover, 1.5 pages SRD, leaving us with 4.5 pages of content, so let’s take a look!

That out of the way, let us take a look at the class herein, with is built on the chassis of wizard and the daivrat, with d6 HD, 2 + Int skills per level, with d6 HD, 2 + Int skills per level, full spellcasting progression, good Will-saves and 1/2 BAB-progression. Proficiency-wise, they only get club, dagger, quarterstaff and shortbow and must be non-evil. The davirat default inherits the wizard’s 1st level Scribe Scroll, but loses it when choosing an alternate base class. The davirat receives bonus languages and must speak one associated with the elements. The class table also mentions arcane bond, but the class text does not list it, so I imagine that to be either an oversight or another component that is an inherited aspect of the wizard base…still, the pdf probably should list the class feature for completion’s sake and to avoid misunderstandings.

As an aside, I think the class has been renamed as “davirat” for IP-reasons, just in case you’re wondering. Then again, I spotted “daivrat” in here as well, so this *may* be a classic, but mostly consequent letter-switch hiccup. I will stick with “davirat” in the review, if only because that is the spelling that is used more often.

2nd level yields Elemental Focus as a bonus feat, 14th level yields Greater Elemental Focus and starting at 4th level, the davirat receives a +2 bonus to Charisma-based skill-checks to influence genies and elementals and their attitude, as well as a +4 bonus to Knowledge checks pertaining genies. 6th level yields a non-aether wysp familiar and the davirat gains a +2 bonus to atk and damage rolls with spells whose descriptors match that of the wysp. The wording here is slightly non-standard, but that’s preposition-nitpicking and will not influence the final verdict.

8th level provides 1/day spell fetching for the wysp, with 13th and 19th level providing an additional daily use. The highly problematic class feature has btw. been streamlined, so kudos there! The engine presented is robust and easy to grasp. Still VERY powerful and requires some GM-limits imho, but that was the case with the base PrC as well. 10th level provides +2 to CL ad Charmisma checks when planar binding (not properly italicized) genies), the bonuses of which increase to +4 at 18th level. Starting at 12th level, the daivrat (or davirat) gains energy resistance 10 depending on the elemental focus chosen.

Starting at 16th level, the character may change Elemental Focus, attunement etc. and also wysps when resting, but only if he knows the respective elemental language. 20th level provides a genie-kin apotheosis.

As per the tradition of this new series, we receive information on using arcanist, sorceror, and witch as alternate chassis-bases, so if you wanted to play this guy adept based on one of those classes, you’ll have some nice, custom guidance options. It should also be noted that these modifications this time around are more complex than in other installments

The prestige archetype does include a significant array of class-specific favored class options for core races and some of the stars of the Porphyran races – interesting would be that the zendiqi, for example, can have a monopoly on evil characters of this class via their favored class option.

Editing and formatting are good, though the nomenclature-confusion and typos make this slightly less well crafted than previous installments in the formal category. Layout adheres to a 2-column full-color standard with PDG’s signature purple highlights and is pretty printer-friendly. Huge kudos: The pdf comes, in spite of its brevity, with full, nested bookmarks, making navigation extremely user-friendly!

Carl Cramér’s take on the daivrat/davirat is, so far, the least inspired of his caster prestige archetypes – from the lack of arcane bond’s wording to the nomenclature hiccups and the fact that the class doesn’t do as much to make its theme strong throughout the levels as previous installments render this one less appealing than the other Caster Prestige Archetypes. It is not bad, mind you – but it is also not particularly inspired or compelling, just feels like there has been slightly less care in its creation. Hence, my final verdict will clock in at 3 stars.