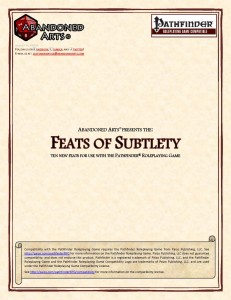 This pdf is 3 pages long, 1 page front cover, 1 page SRD, leaving us with 1 page of content with 10 feats for characters who prefer not ramming pointy sticks full frontal in anything they meet, so what do we get?

-Coercer: +4 to cha-checks to convince those subject to enchantments and compulsions to do your bidding.

-Infuriating Antagonist: When successfully using the Antagonize-feat, add a verbal sting as a swift action to penalize the antagonized foe with a minus 2 penalty for one round.

-Leading Feint: When feinting a foe as a standard action (i.e. not via other means), you and your allies may treat the target as though s/he/it were flanked by you until the target regains his/her/its dex-bonus.

-Shifty Escape: Use the withdraw action even after making a 5-foot step. Elegant and cool, that one.

-Shifty Withdraw: Other way round – make a 5-foot-step after a withdraw.

-Slip Enchantment: When using slippery mind to escape mental bondage and succeeding the second save, you may postpone breaking free of the enchantment to a time of your choosing. Very cool!

-Social Combat: Takes an immediate action in combat. Sabotage Bluff, Diplomacy or Intimidate-checks by rolling against foes – their checks are penalized by the difference of your check and the one of your foes if you surpass their checks. This feat is ridiculously broken since bluff and intimidate have uses beyond talking and since a simple potion of glibness can completely unhinge the balance: Feint? Counter. And rolling against the check means that there’s a lot of variety – competing rolls have a lot hinging on how well the participants roll – and PFRPG prefers an attacking roll versus a static defense as per combat maneuvers. I get what the idea tries to do and actually had such a feat in my homebrew – take it from me: Does not work, unduly slows down combat – avoid.

-Subtle Spellcaster: Whisper verbal components of spells – foes require a DC 15 perception check to notice. NOT a fan. Fixed DC this low means the feat gets useless at a particular level – and the environment can make this so much more borderline/hard to decide for the DM. A busy tavern with subdued music – still only DC 15? Plus: Poor Still Spell. This feat would require its own table of modifications/further clarification on what level of noise would require which DC. And then I’d still consider it problematic due to overlap.

-Subtle Swordsmanship: When using a light slashing weapon or weapon finesse-compatible slashing weapon and scoring a critical threat, you may opt to deal normal damage and instead declare the next attack versus the foe a critical threat as if you had rolled a 20 – but only until your next turn. Oh boy. I don’t even have to try to break this – just make any type of threat-range build and watch the (almost) guaranteed hits pile up. That would be no problem, were there not a huge amount of enchantments that deal bonus damage whenever a weapon hits – so no, not gonna come anywhere near my table.

Editing and formatting are top-notch, I didn’t notice any glitches. Layout adheres to Abandoned Art’s two-column no-frills standard and the pdf has no bookmarks, but needs none at this length.

So…subtlety. A difficult theme to get right – and unfortunately, some of the feats are problematic balance-wise – at least in my opinion. Which is a pity, since the powerful, but nice “Leading Feint” or shifty feats are nice and since “Slip Enchantment” is just glorious. Still, overall, this pdf does have its share of filler-feats and some problematic ones – hence my final verdict will clock in at 2.5 stars, rounded up to 3 due to the fair, low price.

You can get this collection of feats here on OBS and here on d20pfsrd.com’s shop.