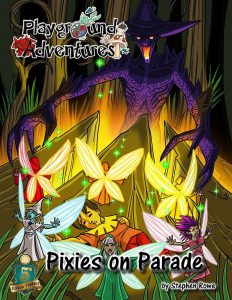 The 5e-version of this module clocks in at 26 pages, 1 page front cover, 1 page editorial/ToC, 1 page SRD, 1 page back cover, leaving us with 22 pages of content, so let’s take a look!

This was moved up on my review-queue as a prioritized review at the behest of my patreon supporters.

I playtested this module with a group of kids, which spans the ages 4 – 11 since this is a kid-friendly module and as such needs to be tested regarding its best age-range – the tabs on my homepage contain the suggested range I’d most recommend this for. Sidebars mention e.g. cartoon violence and how to depict it; it should be noted, though, that adults can enjoy this module as well; with very minor reskinning and a different emphasis, you’ll have a dark fantasy yarn or something akin to a Don Bluth movie from the 80s/90s.

This being an adventure-review, the following contains SPOILERS. Potential players should jump to the conclusion – you see, no one likes cheaters and you’ll just make the module boring for you if you continue reading.

All right, only GMs here? Great! Every year, the town of Glavnost celebrates a festival most peculiar, dressing up with wings and the like to honor the fully statted town’s pixie protectors that keep even the most unruly children from being lost in the forest…failing only very rarely. Alas, one particularly stubborn child named Edwin, seeking freedom from his parent’s commands and wanting a life of eternal blissful parade with the pixies, slipped through the cracks – and the Nightmare King, a boogeyman got him, halting his aging process and grooming him to become the successor, a son…a new boogeyman.

After a brief introduction of the key-NPCs of Glavnost, the festivities of the town (which comes with a thoroughly gorgeous map that could come straight out of a children’s book) are in full-blown preparation – here, the kids have some time to roam, to mingle with the townsfolk and do some research that may hint at the importance of the pixie parade, the nightmare king and the disbelief regarding the existence of gremlins, in spite of the little buggers being made responsible for many a mischief. The prevalence of fey magic allows for a unique gift here: Imagination magic.

With the power of imagination, the kids can subtly alter reality, which also represents e.g. carts coming around in just the right place to catch falling characters and the like. And yes, if the kids are smart, they’ll pick up on this and use it to their advantage! The adults can’t see the gremlins, which btw. include properly-statted pugwampis and vexgits (minor nitpick: spells in innate spellcasting not italicized, and the headers for attacks etc. in the action-section should be in italics as well, not just bolded; these minor formatting snafus extend to other statblocks as well, though not to all of them – still, uncommon to see in Playground Adventures’ offerings), sabotaging the town, but the kids can – and thus, the first task is basically gremlin extermination, with 3 sample sabotages being provided.

Eventually, the success of the PCs will earn them the attention of fairy godmother Lista, who fills them in on Edwin’s fate – which mirrors a playful way to convey stranger danger’s importance as well as acknowledging something: That parents don’t tell all stories to the children, worrying it might give them bad dreams. This is something that ultimately, instinctively, all children know – and to save Edwin, the fairy bestows 6th level (previously gained XP) on the players, tasking them to redeem Edwin and freeing him from the Nightmare King’s influence.

In order to do that, though, they have to brave Edwin’s dark dreams – first, defeating his shade in a game of hide and seek and then, braving toy soldier variant golems (the battle featuring a GLORIOUS isometric map, and yes, figurines of wondrous power, toy soldiers, included! These are moved around via a giant, shadowy hand, and here it should be noted that the errors in the toy soldier statblocks have been cleaned up – including the formatting, which is correct for this statblock. Edwin’s hound would be the next task – and here, things become interesting: The poor dog, turned hellhound by Edwin’s descent into darkness, just wants to play fetch, but the damn sticks keep burning, resulting in angry fire blasts into the woods…which may cause a forest fire! Here, one can teach about being careful with fire…and the encounter rewards kids thinking and providing a stick that doesn’t burn…and reduce the dog back to a regular, non-hellhound pup.

On the, again, lavishly mapped isometric map of the path ahead, fairy circle traps and a tooth fairy await and upon vanquishing the fey, the PCs may get a faerie fire (spell reference not in italics)-duplicating Baby Tooth of Edwin. There is another encounter next that offers yet another means to educate and slightly shock: Edwin, thinking he can impress the fey with a present, stole his parent’s wedding ring – this item became the symbol his remorse, transforming into a now chained golden dragon that needs to be freed, filling in the PCs on Edwin’s crime before turning back into the ring, asking them to present it to Edwin. Minor nitpick: The ring that may be gained here references flight maneuverability, which is not a thing in 5e.

…and then, the ground shakes…trees start toppling…and a ravaging, massive stuffed bear of colossal proportions breaks through the trees…and yes, this encounter once again is beautifully rendered in isometric maps of stellar quality…and yes, the massive, powerful Terror Bear is a powerful adversary indeed…but vanquishing him provides a return of the creature to Edwin’s teddy-bear of old, which may grant advantage versus the frightened condition.

An then, it’s time for the final boss fight: Edwin, accompanied by corrupted, color-less pixies, wants to collect all the pixies for his twisted mockery of a parade…but thankfully, the encounters so far have provided all the components the PCs need to save him: Each of his erstwhile fragments of innocence recovered frees a pixie and, together, they may free Edwin, exorcising the influence of the Nightmare King, freeing raw nightmare power – which is a thoroughly awesome climax: The Nightmare Avatar has powerful, unique powers that the kids may know from nightmares: Like being slowed. At the same time, though, they can use their imagination magic to counter his dread powers in an excellent showdown that may end with the PCs reuniting Edwin with his overjoyed parents – happy ends don’t happen on their own; one needs to fight for them…and one needs to do the right thing. This morale, unobtrusively conveyed throughout these pages, it what really makes this shine above and beyond. On the downside, I am pretty sure I noticed minor glitches in the saving throws of the final version of Edwin, as well as among skills. I noticed minor hiccups like this among the nightmare avatar’s stats as well. The flavor text explaining the way in which the imagination magic works here also references Pathfinder rules language.

Editing and formatting in the 5e-version of this excellent module, alas, are not up to the same level as in the PFRPG-version; they aren’t bad by any stretch of the word, but they sport several minor snafus that do accumulate, and some of them impact mechanics. Layout adheres to a beautiful 2-column full-color standard by Daniel Marshall and the pdf comes fully bookmarked for your convenience. The copious full-color artworks by Jacob Blackmon are neat indeed. A special shout-out to cartographer Jocelyn Sarvida – the isometric maps of this books are downright BEAUTIFUL, featuring gorgeous renditions of the adversaries, which makes them btw. also suitable handouts. Speaking of which – as the astute reader may have noticed, I did not explicitly state that there’d be 1-page hand-outs of said maps. Well, never fret – as the final piece of awesome, this module does feature a PWYW-map-folio for handouts purposes. Take a look at it if you need any example on how good the maps are…

Stephen Rowe’s Pixies on Parade is, in one word, inspired: Mirroring classic tropes of the power of imagination and fairy tales, it never crams morality down the throats of the players, while still teaching what’s right and what’s wrong. The idea of imagination magic is brilliant as a tool for GMs. Now, as for the themes of the module and its suitability for kids: It’s pretty much perfect, mirroring themes of beloved children’s tales and not shirking away from important topics, all presented in a child-friendly manner. I can see some very young kids that are particularly sensitive consider the themes a bit frightening, but in my case, the 4-year old enjoyed the module, surprisingly, more than “A Friend in Need,” despite being frightened a bit – that depends on the kid in question, though and requires the discretion of the parents – personally, I would have loved this module as a 4-year old, having always had a penchant for slightly more mature stories, even as a kid…and yes, I learned to read at a very young age to read some fairy-tales my parents considered inappropriate…which became my favorites. It is my firm belief that kids can benefit from topics that are not all sunshine and flowers, particularly if they feature a didactic and moral component.

As a reviewer, I think the target age-range for most kids will span the ages of 6+ – and yes, I did not include a limit for a reason. Why? Because this module not only is great for kids. It’s just as awesome for adults: Seriously, just tweak the fluff a bit and make it darker and you have a GLORIOUS fairy-tale themed introductory module that makes for a great starting point of PC careers as a prologue: Just let the level 6-blessing revert after the module and skip to adulthood – where you can also add elements appropriate for the process of growing up and paint a bleaker picture. Or make a campaign about innocence lost too soon…

Pixies on Parade’s premise and scenes are a downright awesome: From the gorgeous maps to the blending of sandboxing in the beginning and a more linear heroes’ journey, this book’s themes are concise…and there is not a single boring encounter in this book, not a single uninspired critter or problematic scene, nothing I could complain about. All of this holds true for 5e as well – for the actual content.

However. Dan Dillon’s conversion is as good as you’d expect from this master of 5e, and manages to tackle the spirit of the adventure well, and preserve it – he really gets 5e, after all.

At the same time, this iteration of the adventure is simply not as refined as the PFRPG version – it features quite a lot of those pesky, small errors, from spell-references to formatting oversights to other components, which, while on their lonesome, won’t hurt…but they do accumulate, and in a masterpiece like this, they still felt glaring to me. Playground Adventures usually is much better at catching even miniscule snafus. Anyhow, I can’t rate this as highly as the PFRPG-iteration; the module is inspired, the conversion more than competent in the broad strokes and concepts, but the sheer number of small glitches in formatting, references, math, etc. weigh this down. Hence, my final verdict can’t exceed 3.5 stars, rounded up due to the strength of the narrative. It’s simply a damn fine adventure for young and old alike. If you have the luxury of choice, though, do use the PFRPG-version – it’s clearly the vastly superior iteration.

If you have the luxury of choice, the superior PFRPG-iteration may be found here!

If you enjoy my reviews, please consider leaving a donation or joining my patreon here.