Mini-Dungeon: Maze of the Skullkeeper

Mini-Dungeon: Maze of the Skullkeeper 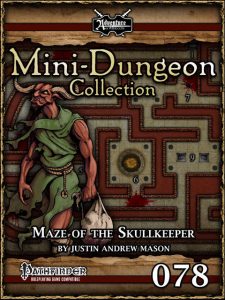 The PCs have been drugged and captured by Lord Xu Tannak, and no the PCs will be forced to run the maze of his Skullkeeper, a deadly minotaur. The maze comes with 6 sample events and descriptions of the rooms, with desperate NPCs hoping to escape as well. Avoiding the potent minotaur will NOT be simple and the module is brutal, particularly since PCs only get a torch, a rusty shortsword and a loincloth.

Editing and formatting are very good, I noticed no significant glitches. Layout adheres to a beautiful 2-column full-color standard and the pdf comes sans bookmarks, but needs none at this length. Cartography is full color and surprisingly good for such an inexpensive pdf. Annoying: Location #1 is almost obscured by the scroll-header of the module. The .jpg version included here, which you can easily cut up and hand out to the players as they progress is a huge bonus -and even better: A KEY-LESS VERSION sans the annoying letters/numbers is included as well for full VTT-compatibility!!!. The pdf does sport one nice piece of original full-color art – kudos!

Justin Andrew Mason’s maze of the skullkeeper is a cool, deadly gauntlet. The layout glitch is a bit problematic and a reference to combined strength to remove something is a bit odd and not how things are usually handled in PFRPG. Still, in spite of these guffaws, this is worth checking out – my final verdict will clock in at 3.5 stars, rounded up due to in dubio pro reo.

You can get this labyrinth-run here on OBS!