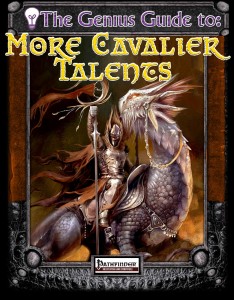 The more than due expansion for the talented cavalier is here and clocks in at 9 pages, 2/3 of a page front cover, 1 page editorial/SRD, leaving us with 7 1/3 pages of content – less than what the monk got, but let’s take a look, shall we?

Unlike the addendum to the talented monk, though, we kick this one off with new edges – and one of them makes good of the promise evoked by the great cover artwork – Yes, there is a dragon mount option herein. While you’d use the Dragon Rider base-class essentially as a guideline to use the ability (or check d20pfsrd.com for the class), the codification of the rules in a talented context are nice to see – even for someone like me who is rather opposed to the whole dragon-riding concept per se. The second new edge introduced herein would be Rally – and it is no less a courageous decision to put in a product: Rally allows the cavalier to once per day heal all allies within 30 ft. (more if using a banner)by 1d6 hp (+1d6 for every two additional cavalier levels) via nonmagical healing to represent an increased staying power of the allies in the face of overwhelming odds. However, the allies can never exceed 50% of their max hp when being thus healed – the wounds do not vanish and the ability draws inspiration from rallying speeches as recorded/shown in multiple media. I’ve rarely been this torn about an ability – to me, this one smells suspiciously of the hated “bloodied” condition from 4th edition, but on the other hand, it is limited by action, availability and caps, making it impossible to actually close serious wounds. It’s a border-case of what my suspicion of disbelief can take, but one that, due to its limits, still works out for me. I do hope, though, that not too many such mechanics creep into PFRPG in the future – tracking degrees of being wounded in a game that has not been specifically designed for it (like shadowrun) can be quite the hassle…

Now both edges can be improved via talents, with one taking the edge off (haha) the edge, making cavalier levels count as dragon rider levels (instead of at -2 as per the edge) and rallying being able to get rid of negative conditions (which works better than hp-healing in my book), expand these conditions to be removed further via advanced talents and finally combine these with the hp-gain as a grand talent. Now also rather iconic would we what I’d call “honorific position”-talents, i.e. talents that denote the cavalier’s standing and thus net special bonuses: These talents generally provide you with a class skill and allow you to make skill-checks in that skill with d20+cavalier levels  +attribute mod+3 instead of the regular check – i.e. no need to invest skills!

This may sound like a simple idea, but it really isn’t – it allows a cavalier to excel at what s/he’s meant to be good at without tempting wildering in the skill monkey’s area. Speaking of which – via classic education, you can count as if you have all skills, allowing you to check essentially untrained in all of them. But back to those position-talents – rather awesome, you can actually reap additional benefits that should make kingmaker-players or captains grin – by flying a banner from a stronghold or vessel with the appropriate talent, you can extend the effect to the whole vessel/fortress in question. Awesome, since it makes capturing the banner/flag and its morale effect also palpable in a crunch-context. Also: Unobtrusive, optional synergy with kingdom-building/downtime-rules? HELL YEAH!

Granting the shield’s bonus to adjacent allies may be nice, but at least for me, the Dragoon-talent takes the awesome-cake: It allows you to dismount fast with a significant bonus and later even automatically/sans action – nice, but what’s so great about it? Played Final Fantasy 4 (or 2 in the US)? Well, cavaliers with this talent may apply mounted charge feats when charging unmounted. Spirited charge and all those signature tools – right at your command! And in one talent, unmounted cavaliers suddenly are cool and work. This talent is…GLORIOUS. Worth the asking price alone. And yes, I’m aware that this could become problematic when in the wrong hands – but it makes the class DISTINCT. Powerful? Yes. Broken? At least in my opinion, no. Thank you. Fighting from a Houdah (or Howdah, if you prefer that spelling) is now also possible at neat benefits, including faster dismounts.

On the side of advanced talents, we get a massive array of planar knight options (including individual edicts for the respective planes) and associated with it, we also get a capstone that acclimates the cavalier to his planar domain – cool indeed!

As has become the tradition with “Talent”-pdfs, we end with a list of talents by theme.

Editing and formatting re good, though not perfect – while we don’t encounters any significant issues, we probably don’t want cavaliers to take “Grant Talents”, as the text mentions once. Nothing serious, though. Layout adheres to SGG’s full-color 3-column standard and the pdf comes fully bookmarked for your convenience.

Dragon Rider talents are awesome if that floats your boat. Rallying is nice and just on the edge of what I’d consider good design – but the “honorific position”-talents strike a chord with me – after all, the symbolize oh so well what separates a cavalier from fighters and the like. And then there’s Howdah-fighting. And the Dragoon-talent. The latter makes in one fell swoop (See what I did there?) the cavalier class awesome and on par with other martial classes – while maintaining the identity of what being a cavalier should be. This pdf is AWESOME. In fact, it mops the floor with all previous, excellent “More Talent”-Genius Guides, since it provides all those cavalier-tools its basic pdf (and the base-class said pdf was based on) lack – here we have the talents that make the concept of the noble fighter not only work, but do so in an iconic, fun way – this should be a) considered all but required for all talented cavaliers and b) makes one thing clear: I want more! The cavalier deserves more tools like this, deserves to shine – and this pdf is definitely not the end of the line concept-wise – so when do we get part II? Even More Cavalier Talents?

I forgot the verdict? 5 stars + seal of approval. Do your knight a favor, give him an edge and get this pdf – asap!

You can get this superb expansion for the talented cavalier here on OBS!