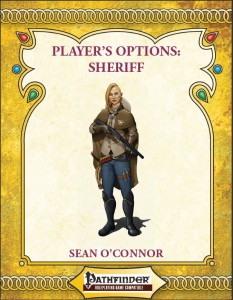 This installment of the Player’s Option series is 12 pages long, 1 page front cover,  1 page editorial, 1 page SRD, leaving us with 9 pages of content, so let’s take a look, shall we?

Mechanically, Sheriffs need to be lawful, get d20, 2+Int skills (the class could have used more skills per level, but oh well…), full BAB-progression, good fort-and will-saves, proficiency with all simple and martial weapons and all types of armor and shields, but not tower shields. They also get proficiency with swordbreaker daggers, or repeating crossbows or firearms as bonus feats at 1st level to reflect their training with weapons that can help bring in lawbreakers.

At 1st level, a sheriff chooses a so-called jurisdiction – a country or similar region for which s/he has jurisdiction. This results in a +1/2 class level bonus to diplomacy, knowledge (local), perception and sense motive while wearing his/her badge, but also a bad starting attitude when interacting with chaotic creatures. At 4th level and every 3 levels after that, her jurisdiction is acknowledged in an additional region – like famous investigators that develop fame on a scale that transcends borders.

Sheriffs at 1st level also need to decide on a precinct, which essentially provides them with guidelines and a code of conduct by which they operate. Each precinct nets additional class skills, bonus equipment and a particular special power. Furthermore, at 2nd, 8th and 14th level, they get an ability and at 3rd level and every 3 thereafter a bonus feat drawn from a precinct-specific list.

The sheriffs also learn taking others in alive and hence may choose from a selection of different +2 bonuses (e.g. to non-lethal damage, CMD to resist and CMB to perform dirty tricks etc.) at 5th level and again at 11th and 17th level. At 5th level, they may also declare a warrant on a foe, making him/her more powerful versus the targeted fugitive – not only combat, but also research-wise. This bloodhound-like tracking and investigating is further increased at 13th and 20th level, though the capstone’s insistence of “further growth” of the warrant feature when talking about being able to have an active warrant on 3 foes at the same time makes me believe that the +1 warrant for 2 active warrants at 13th level was somehow lost.

Now what about those precincts I mentioned? A total of 5 are provided and they come with quite a slew of abilities: Bounty Hunters are essentially somewhat akin to rangers and adepts at hunting down foes. Divine Justices get a powerful version of smite chaos that also protects them from foes and gain access to a very limited selection of paladin spells and finally may treat weapons for which they have weapon focus as axiomatic. Now if these seem a bit unbalanced in direct comparison, that’s mainly because skills and feat-lists as well as starting equipment are also balancing factors . uncommon, but not a bad decision. i actually like it! Some sheriffs are judges, jury and executioner in one person – these sheriffs are not trying to take you in alive – they finish the job then and there and, at 14th level, may for con-rounds make their weapon focus weapon vorpal for one round and reroll misses due to concealment. I’m honestly not comfortable with the vorpal ability at 14th level – but then again, I’m not comfortable with the weapon quality. Still, it seems a bit early for vorpal.

Long Arms of the Law are the firearm specialists – and don’t get grit – but do get one ingenious ability –  starting at 2nd level, they may, as a free action, add their will-save to their touch AC versus firearms – I would have loved more “anti-grit” abilities like this – the design is solid, but could have been simply awesome. As provided, they are a solid, less risky firearm specialists.

Posse Leaders may deputize NPCs and are essentially capable of temporarily recruiting NPCs depending on their level and increase their abilities to lead others.

We also get 3 mundane items, 4 firearm modifications (different stocks – detachable ones, for example)  and the stats for an executioner’s sword. We also get 2 different CR 3 sheriffs and 3 statblocks for different posse members.

Author Sean O’Connor has created a good take on the sheriff-trope that comes with some rather cool precincts and features some abilities I’d really consider well-built and innovative. Taking for example the option to fortify against firearms or the posse leader’s recruitment – they are great, but choosing between more options would have made this even cooler. In fact, that’s the one thing I could hold against this class – apart from the a tad bit too weak bounty hunter and the potential problem with the vorpal-ability of the JJE-precinct, I enjoyed this class in spite of  being relatively linear. In the end, the sheriff is a sufficiently distinct class that could have, with more room and e.g. archetypes and some additional unique powers (why not offer limited grit-access? Why not determine different bonuses based on jurisdiction [theocracy nets other bonuses than magocracies/rural areas…]?) become a true winner.

Within the few pages devoted to it, it works as a solid class that has some excellent ideas that hint at as of yet partially unrealized potential.  Speaking of which – the class is, also rather linear when it needn’t be – why not tie jurisdiction to categories à la “tyranny”, “magocracy” etc. – all worlds tend to have these and providing exclusive modifications for the precincts would have made this class so much cooler and a more versatile experience. Don’t get me wrong – the sheriff is by no means a bad class, but it is one very linear one and probably more fitting for NPCs. That being said, we still get a solid offering for a fair price and hence my final verdict will clock in at 3.5 stars, rounded down to 3 for the purpose of this platform – unless you’re looking for an NPC-class – in which case you should consider this a round-up-file of 4 stars.

You can get this neat class here on OBS and here on d20pfsrd.com’s shop!

Alternatively, you can also get the whole subscription of Player’s Option-pdfs and determine what will come into the final book here on OBS and here on d20pfsrd.com’s shop!