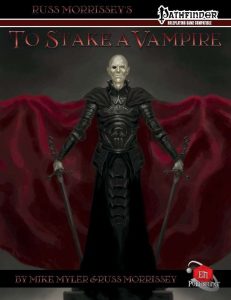 This module is the direct sequel of “To Slay a Dragon” and thus assumes a 7th level party that is preferably able to cover the basic 4 core roles; particularly having a cleric is something I’d strongly suggest. The module makes use of Holdenshire as a backdrop – like its prequel, and medium advancement track is considered to be the default. Considering the highly random chances of the dragon Cirothe destroying a variety of places, this aspect may be one that GMs running the prequel should take into account.

Another note to be aware of: While it is possible to run this as a stand-alone, the end of the previous module saw the PCs knighted, which means that a certain authority and sense of responsibility is assumed – if your PCs are murderhobos from the lower social strata, this may require some tinkering.

All righty, so lord Pemberton has fallen ill and his wife is consumed with caring for him, leaving the citizens of Holdenshire to fend for themselves as a particularly harsh winter is approaching. The pdf provides a full gazetteer-like section of Hengistbury, the most important settlement, and the key NPCs found here – the NPCs come with mugshots, though groups that have ran Zeitgeist will be familiar with the mugshots, which can be a bit jarring. Much like its predecessor, we begin this module with a series of modular, smaller quests and we do get a random encounter table.

Hengistbury is not the usual, friendly place – the cold inds seem to mirror the coldness and hostility of the folk there and indeed, it seems as though a curse has fallen on the village, one that requires some investigation: You see, a pig-farmer (whose pigs represent one of the threats here), has been turned into a covert-Ops-style vampire spawn and he has been poisoning the food of the local people – something the PCs can hopefully stop! The PCs are also contacted by Stephanie Rosewynd, one of the gypsies, who fears for the health of Ugg, the friendly hill giant mascot of the region. Her vision proves true – his dire bear companion has been vampirized and may well spell doom for the poor creature.

Ultimately, the PCs will have to track down the vampire spawn pig farmer…which will also lead them to a mini-dungeon, where the amulet of the spectral grove  can be found – a 78K item amulet that duplicates protection from evil keyed specifically to vampires and vampire spawn and may allow the wielder to become a ghost, leaving the body behind and emitting untyped damage-causing pulses of light. The rules-language regarding these pulses is wonky – action economy constraints prevent the multiple uses the item ostensibly allows per round. I am also quite sure that we have a 3.Xism here, with return to one’s body requiring a save (that becomes harder, the more the powers of the amulet are used) to avoid dropping to -10 hp: This can kill characters with bad Con and I’m pretty sure it’s instead supposed to deliver the target right at death’s door – which would be negative Constitution hit points. Why is this important? The VERY valuable item is one of the tools the PCs are supposed to use to defeat the BBEG. Issues in the rules here are problematic.

Returning to Holdenshire does not provide the relief expected, though: Injuries fail to clot and vicious animals attack – oh, and in one section people uncontrollably “bleed tears.” I am pretty sure this was supposed to read cry blood. The module does have a rumor-battling mini-game – basically, the PCs gain points and so does the GM, which may then be used to modify social interactions. While the mini-game per se is nice, it does not really come that much into play; it would have imho made more sense as the central motif for an adventure or section, but that may be me. (It should be noted that the release of this module predates Ultimate Intrigue, so I won’t complain about a lack of synergy there.)

Anyways, in order to deal with the afflictions ailing Holdenshire, the PCs will have to explore a variety of tombs, all around the theme of one hero – as such, each of the brief tombs offers a couple of minor challenges like traps and combats and nets one potent item each, while also allowing the PCs to deal with one of the curses. These tools include a quickbow, a variant hand crossbow that allows for quicker shots at -5 to atk, a good-aligned magical earthbreaker that grants 3 feats (power Attack, Cleave and Great Cleave, sans penalties versus the undead!), hastening anti-undead starknives, a gun that transforms holy water into beams of sonic energy – which is per se damn cool and basically a non-weapon launcher, closer to how magic items than regular weapons work. Each of the tombs also sports nightmares for the PCs to experience (depending on sequence) and, in case you were wondering, the aforementioned amulet acts as basically a beacon. Having collected all, the items point the PCs towards the final artifact of the Order of Light, whose tombs the PCs had to raid…and banishes the curses, but then, the vampire lord mastermind’s remaining agents assault the PCs, making for a brutal finale to the second act.

The PCs now may have brought the common folks some respite from the unearthly, vampiric curses, but in order to be triumphant, they will have to track down the vampire lord Nemirtvi – and deal with his most prized agent, which is, unsurprisingly, the vampire-spawn’d lord Pemberton. Yeah, we all saw that one coming and one big issue of the module is that it would make a lot of sense for the PCs to suspect that from the get-go and deal with it at all costs – the GM must engage in some serious handholding here, at least when dealing with more experienced players. The dungeon that lead downwards is mostly mapped with player-friendly full-color maps, but not exclusively so – it should be noted that, much like “To Slay a Dragon”, the exploration of the dungeon sections of this pdf don’t go room by room, but instead provide the basic tools. The relative simplicity of all dungeons and their linearity are one of the aspects that will probably not be to everyone’s liking, particularly regarding the old-school crowd that this is marketed for. (The module, much like its predecessor, even states old-school feeling as a design goal, so that is not just an observation!) Interpreting a mad dwarven engineer’s rhyme, the PCs can destroy a horrible crystalline construct that enhances the vampire – and would allow the beast to return, unless it is dealt with for once and for all. In the lair of the vampire lord, the PCs have to brave the vampire and Pemberton among countless wax statues, who may btw. be saved by competent PCs…of sorts. He can become the intelligence of an awakened relic of the order of light, further enhancing the relic – from there, he may actually be returned to life.

Editing and formatting are good, though not as tight as usual for EN Publishing’s modules. There are a couple of formal and rules-language snafus here and there. Layout adheres to a nice two-column full-color standard and the pdf sports solid artworks, though fans of EN Publishing will be familiar with most. The pdf comes fully bookmarked with nested bookmarks.

Russ Morrissey, Mike Myler and Brian Casey’s anti-vampire romp…left me singularly unimpressed.  Much like its predecessor, it feels more like a sketch than a finished adventure and makes you do A LOT of prep-work. The non-standard presentation (all stats etc. at the end of a section) make running the module less convenient than it should be. The exploration of multiple bland and extremely linear tombs is a boring grind and unbefitting of the cool idea of the curses and makes the center part of the module feel redundant. Much like its predecessor, the adventure does not care about WBL that much, so PCs will have some serious wealth on their hands, item-wise.

The issues of “To Stake a Vampire”, beyond these, are two-fold: On one hand, it tries to be an investigation-heavy adventure; on the other, its railroad overall structure doesn’t necessarily help with that premise. The obviously vampified friendly NPC is a potentially huge roadbump for the GM. As for the old-school premise, I’d disagree in the module excelling at capturing that style of play – compared to the original Ravenloft-module, this, alas, falls woefully short in feeling and aesthetics – old-school GMs will not like this one and should probably instead take a look at Frog God Games’ Quests of Doom I, which sports two nice anti-vampire modules…or, you know, the classic Ravenloft modules.

In fact, the saving graces of the module are when what I assume to be Mike Myler’s pretty distinct playfulness and new school high-concept aesthetics break through; while this doesn’t fix the issues in structure and themes, it does elevate what I’d otherwise consider to be a very underwhelming scenario to one that sports a couple of saving graces. Hence, my final verdict will clock in at 2.5 stars, rounded up by a margin for the purpose of this platform. I’d strongly suggest getting one of the excellent vampire modules out there instead.