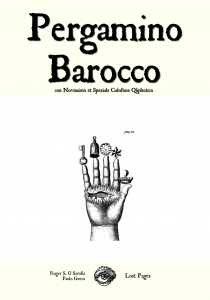 This booklet clocks in at 24 pages of content, once you take away the editorial, front and back cover, etc. This review is based on the print-version (digest-sized, A5/6’’ by 9’’), on the economy-version of the booklet, to be precise – I do not own the original leporello version.

Okay, so, what is this? Well, if you’ve spent any amount of time with real life occult and/or magical traditions, you’ll quickly realize something: Spellcasting in any version of D&D or d20 and all derivatives is significantly different from what you’d consider to be magic(k)al practices in our world. Magic in traditional texts not only has a vast, philosophical background, it also feels different – it’s the reason I often complain about spells feeling just like numbers with a thin coat of fluff tacked that’s tacked on.

It’s also a reason why e.g. the volatile magic championed by LotFP for the quasi-historical earth as a setting makes sense to me, though some of you will most certainly want magic that feels more occult, that feel more like spells you could find in a real world spellbook. This is basically what this little booklet attempts. Now, it should be noted, that, while I am thoroughly intrigued with mysticism of all sorts and esoteric traditions, I am an atheist. As such, my fascination is not grounded in faith, but an academic curiosity. I am thus not qualified to discern whether any of these spells potentially are problematic in such a context.

Okay, regarding the structure of the booklet: The spells contained herein are depicted as long-form spells – this means that they take up at least one page herein, with thematically-fitting, historic public domain art depicting the respective spell. Each spell also sports a cartouche that reminds one of hieroglyphics – glyphs represent the respective schools of magic, each of which is noted not only by name, but also by color. Each cartouche also notes the spell circle/spell level in Roman numerals and the minimum caster level required to cast the spell in Arabic numerals. The spells are usually associated with 2 schools, allowing for further customization there. Now, this booklet is system-agnostic – when a save is required, we get e.g “Fortitude/CON/Wand”, meaning that you can pretty easily determine the respective save for your system of choice. Non-physical damage is typed, which is similarly helpful, but e.g. physical damage types are not pre-determined, though usually easy to determine. In the few cases, where AC is required, both ascending and descending values are provided.

Okay, so that would be the general properties – now, let us take a look at the spells: At 3rd spell level, we can find Cheirosciamany. This spell comes with a whole page of graphics depicting silhouettes of hands and the shadow-animals thus created…as well as basic stats for the animals: The caster must make the hand gestures and potentially more creatures can be created thus – though the 12 shadow animals for the spell are intriguing. Some, like rabbits, gain an initiative-bonus (denoted by “quickness” and varying durations. The spell can be pretty fun at the table and codifies the range of the shadow animals properly. The Prelapsarian Pavilion of Mundjogo, a level 4 spell, creates a gazebo, wherein people are reverted to a state before Original Sin, creating a state of enforced innocence – the danger of this state is elucidated by a nice dialogue. Additionally, a magical tree with different kinds of fruits are also within the book. Also at 4th spell level would be The Radiating Cloud of 7 Interfering Bands – perhaps the spell herein with the most direct combat relevance herein, this complex and cool spell provides no less than 7 different bands that emanate from the caster, one per round, traveling outwards – these bands include mists, flickering flames, surging waters – great visuals here!

The Caryatid Cordon of Cerysse, also at 4th level, takes the classic image of elemental-associated caryatid columns: These columns can be used to guard places, preventing the ingress of different materials, based on the element associated – e.g. stone and metal can be kept away; the air column keeps that away. Each of the jars carried by the columns contains a guardian creature. Amazing one – so going to use this as a central part of vault/dungeon-security. Hester’s Exacting Accountancy (rd level) is a banker’s dream (or that of a dragon…) – the spell can command coins to count themselves, pack themselves, can be commanded to move en masse or command the coins to tell tales. The Appeal to the 7 Worthy Elders is a potentially hilarious divination-style magic, conjuring forth 7 bickering elders/philosophers – d12, d20 and d100 are used to determine information – the longer something is long gone, the lower the chance to get a good answer…and 20 different pundits/philosophers are provided, each with an evocative name and a two-or one-word summary of the respective personality.

At 5th level, The Contundent Chaos – Void without Form, creates a deadly vortex of fire, ice and void…which may suck unfortunates away. At first spell level, a classic from real life mysticism is provided – the Ovo Sub Aquea of Bellorand: An egg that needs to be placed under water after preparation – it remains afloat and can be commanded to burst into fire at the top. Really cool. Speaking of which: The Multifarious Mandagalore, the hand you can see on the cover, is intriguing: The spell changes the wizard’s right hand, adding 6 special symbols, each of which always for a single-use-trick: The Key, for example, opens a mundane lock. Also at 3rd level would be the inverse of this spell, the left-hand path version of this right-hand path spell: Notably, that would be the Nefarious Fell Hand, where less…benevolent symbols are associated with each finger. It’s small ideas like, based in real life mysticism, that add enhance the clout, in lack of a better word, the illusion of historicity.

The final long-form spell herein would be the 3rd level spell The 5 Swords of Severity – in a swirling mist, 5 named swords coming from a swirling mist attack – they sport Str and Dex-values, note the enhancement bonus of the weapons and the respective wielders, allowing you to determine the respective attack stats in your system (18 Str, 10 Dex, wielded by a 10th level fighter, for example).

Now, the original leporello version came with a mini-grimoire of spells, the Grimoirio Minuscolo, which contained spells based on the Qliphoth – these are interesting in concept, but suffer a bit due to their brevity and the concepts they represent: 11 such spells are provided, and, to give you an example, e.g. Thaumiel splits the target in two, halving the levels. One half is controlled by the referee, one by the player. One half is prostrate and incapable of acting, while the other is suffused by pure, destructive hate. Sure, it’s a 6th level spell, but that’s still a pretty complex rules-operation in all but the most rules-lite of systems. Really cool, concept-wise: Sathariel – The subject can’t distinguish between matter and energy; Causality, magic, movement – none of these will be perceived anymore, instead only showing a succession of still matter. You probably get the idea here – the spells depict fantastic, interesting concepts, but suffer from the restrictive format imposed by the original version – these should be thought of as something more akin to system neutral concepts that lack the details the spells in the Pergamino offer to allow for easy conversion. The final spell is powerful, but problematic – reverse transsubstantation: Save or die as blood turns to wine, save again to prevent damage, as part of the flesh turns permanently to bread. Save or suck…at level 6. Basically, these are more concepts than spells and the limited space assigned to them means that the otherwise precise, system agnostic rules in the book can’t be properly applied here.

Editing and formatting are very good, on both a formal and rules-language level: Particularly the latter, considering the system-agnostic nature of the booklet, is impressive indeed. Layout adheres to a 2-column b/w-standard and the pdf’s public domain art is PERFECT. I mean it. I love the respective uses here. Big plus. The physical book is saddle-stitched.

Roger S.G. Sorolla and Paolo Greco have crafted a book I ended up enjoying significantly more than I figured I would – I really loved the spells herein and, particularly, how they feel; especially if you’re playing in a low-fantasy/gritty setting, this can be considered to be a really cool array of unique and evocative spells. That being said, at the same time, I can see this not being for anyone – I can see folks shrugging at these or getting nothing out of the booklet…the appeal of this offering is contingent on whether or not you enjoy spells rooted in real-world occultism or not; without this draw, the pdf does lose a central component of its appeal. In such a case, detract a star from this book.

All in all, I do not regret buying this – far from it. But neither would I consider it to be an absolute must-have for all kinds of groups. If the idea of very occult-feeling spells appeals to you, then this is certainly worth checking out. My final verdict will hence clock in at 4 stars.

You can currently get this booklet exclusively on the Lost Pages-store here!