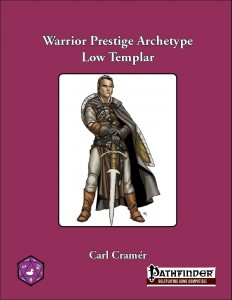 This pdf of the Warrior Prestige Archetype-series clocks in at 9 pages, 1 page front cover, 1 page editorial/introduction (explaining the base concept of the series), 1 page SRD, leaving us with 6 pages of content, so let’s take a look!

The Low Templar receives full BAB-progression, d10, good fort- and ref-saves, 4+Int skills per level (with an extensive class skill-list) and proficiency with simple and martial weapons and all armors and shields, including tower shields. The low templar receives a limited selection of favored enemies and adds further choices at 5th level and every 5 levels thereafter.

At 2nd level and every 4 levels thereafter, the low templar receives sneak attack progression and 3rd and 8th level see armor training (medium) and (heavy), respectively. Also at 8th level, we get swift tracker, while 9th nets evasion. 4th level nets hunter’s bond (with the favored enemy granting or animal companion at character level-3 as choices) and the flag of convenience ability not only nets bonuses to illicit skills (disguise etc.), but also offsets leadership penalties for certain problematic behaviors. 7th level low templars may forego sneak attack or critical bonus damage to roll on a d6-table to inflict save-less temporary negative conditions, with duration being enhanced by higher crit multipliers. At 10th level, low templars choose light or darkness and may ignore partially the components of the respective chosen alignments. Better withdrawing, using Stealth in areas with limited cover, quarry, following killing blows with attacks as a swift action…interesting.

Improved evasion, attacks on retreats and better saves versus charms and compulsions for allies as well as improved quarry can be found among the high-level abilities of the low templar. At 19th level, the low templar receives a planar cohort and may mask the second component of his alignment. The capstone is the nice instakill/insta-subdue-shot the lantern bearer also had.

We also receive solid FCOs for the core-races and a sample NPC at levels 1, 5, 10 and 15. Since in Porphyra, races are balanced slightly differently, we also receive two bonus (racial) traits for humans – solid.

Carl Cramér’s Low Templar is a pretty smooth example of what this series should be all about – the Low Templar PrC feels unfocused and all over the place and while this partially extends to this class, it feels so much more concise, so much more WHOLE than its base PrC. The Low Templar feels like pretty much the conflicted, pragmatic veteran between light and darkness it wants to be. The breadth of abilities helps the survivor-aspect of the class, while still providing a bunch of cool narrative-centric options. There is, quite honestly, nothing I could complain about with these guys, at least nothing that would be fair to the design-intent of the product line. Whether as disenfranchised crusader or as pragmatic, rogue knight – the low templar as presented herein makes sense and is fun – and it will be used in my campaign. Nothing to complain, a highlight of the series – humble, cool and well worth 5 stars + seal of approval.

You can get this awesome example of what this series can deliver here on OBS and here on d20pfsrd.com’s shop!