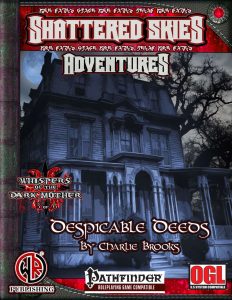 The third installment of this series clocks in at 23 pages, 1 page front cover, 1 page editorial/ToC, 2 pages of SRD, 1 page back cover, leaving us with 18 pages of content, so let’s take a look!

Included in this pdf would be a brief write-up of Coirithradail, Celmae’s god of cities, currency and horses – the write-up sports notes on temples, priest’s roles, etc. – 5 domains are granted by the deity, as well as 4 subdomains – for example “LanguageAPG”; just to show you one example of the editing-hiccups herein. It should also be noted than 2 of the pages of this module are devoted to recapping on how to run haunts. I don’t have anything against a rules-recap like this – in fact, I consider it helpful for new GMs. However, it’s weird to see this in module #3 – after all, the rather…let’s say, “less than superb”, module #2 sported haunts. It also doesn’t really bring anything new or is particularly concise – it’s literally copy-pasted from the SRD…minus the spell-italicizations and similar formatting peculiarities. It’s puzzling and eats up word-count real estate of an already pretty brief (but inexpensive) module.

As before, we don’t get a proper map-appendix or player-friendly versions of the maps, but after the first two modules, I assume that you’re familiar by now with the shortcomings in the cartography-department.

All right, that out of the way, let’s take a look at the module! The following is a discussion of the content herein. As such, the following contains SPOILERS. Potential players should jump to the conclusion.

All right, only GMs around? So, if all went well (unlikely) in the previous, pretty weak installment of the series, then the PCs should have picked up the Lamentations of the Fungus Men – and from here on, the trail should point the PCs towards the revered Bhestos family and the family’s scion Maartin – I strongly suggest using the optional hooks as well to point the PCs in the right direction.

Maartin has had a tough time: His wife Farrah came down with depression after childbirth, and his son Yurah similarly was weak and ill – seeking respite, Maartin hired the nanny Juen – who only exacerbated the situation, started an affair with Martin – which was promptly found out. Maartin’s wife hanged herself, while the “nanny”, truly a totenmaske in disguise, proceeded to fully indoctrinate Maartin into the cult’s fold, with the Dark Mother bestowing deformed, but obedient children to the Besthos’ family’s scion. What became of Maartin’s child? Consigned to the attic, the kid perished. Yeah, the background here is dark. Oh, and the vines around the building? Assassin vines. Classic.

Aforementioned totenmaske may be wounded, but the entity also is the most dangerous foe in the module – big plus: The stats are more solid than anything I’ve seen in the series so far, even though there are deviations from the standard in the statblock formatting. Similarly positive: The fully mapped mansion’s rooms sport interaction points, read-aloud texts etc. A HUGE plus: The tragic history, including the barrier that damaged the totenmaske, makes sense – the graven guardians, the attic whisperer that once was Yurah, the haunts – they actually tell a story of sorts. Not as well as e.g. Pyromaniac Press’ “From the Ashes”, but better than any module in the series so far. Ultimately, the PCs will have to defeat Maartin and his pickled, deformed “children”, eliminate the totenmaske and hopefully help the haunts being resolved – just slaying the fellow won’t help regarding the haunts. Ultimately, the trail of Shub-Niggurath’s corruption seems to point to the capital city of the region…

Editing and formatting are not exactly good, but not even close to as bad as in #2 – thankfully. Layout adheres to a 2-column full-color standard that’s nice and the pdf comes with some really nice, original artworks. The pdf comes fully bookmarked. Cartography, while nice, is inconvenient due to the lack of player-friendly versions and the small maps within – not exactly helpful. The module has copying of the text disabled, which is somewhat annoying.

Charlie Brooks and Jacob W. Michaels deliver the, by far, best installment in the series so far: The haunted house depicted within is interesting, atmospheric and lacks big issues – it can be considered to be a solid take on the genre.

There’s one problem here. It’s a haunted house module. I love those, as pretty much everybody who’s been following my reviews can attest to. The problem here is the genre; the fact that I can rattle off, at the top of my hat, at least 5 SUPERB haunted house-modules for Pathfinder alone.

Beyond the well-known examples from Paizo’s oeuvre, we have gems like Pyromaniac Press’ “From the Ashes”, for example. If we go beyond the borders of the system, I can spend hours, literally, extolling the virtues of various legendary haunted house modules. In direct comparison, this falls flat of that level of excellence.

Don’t get me wrong. For the low price point, this is a solid offering. It raises the bar of the series back to a level, where I am hopeful for the adventure-series. At the same time, I can’t wholeheartedly recommend the module when seen in context. If you’re running the series, this is worth checking out, though. My final verdict will clock in at 3.5 stars, rounded down for the purpose of this platform.

You can get this haunted house here on OBS!