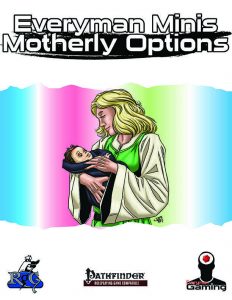 This installment of the Everyman Minis-series clocks in at 10 pages, 1 page front cover, 1 page editorial, 4 pages of SRD, 1 page advertisement, leaving us with 3 pages of content, so let’s take a look!

Okay, while this pdf is called “motherly” options, it should be noted that this is very much a parental book – one that takes the potential of adventurers with families and the resulting dynamics into account – so yeah, non-female characters can similarly benefit from the options presented herein.

The first of these would be the caretaker bard archetype, who is defined by 3 alternate bardic performances. The first replaces inspire courage and nets a single d10 reroll with a +1 competence bonus. An affected ally may only do so once per round of performance, but I am pretty sure that there is something amiss in the rules here: The power of a d20 reroll, with a bonus that increases by a further +1 at 5th level and every 6 levels thereafter, vastly eclipses inspire courage’s usefulness. While each ally can only benefit once per round (+1/round whenever the bonus increases!) from it, that is still really strong and should cost more – I *think* only one ally per round was supposed to be able to benefit from a reroll, something that got lost here – otherwise we have 4 rerolls per character! That would be insane!

8th level replaces dirge of doom and frightening tune with fly – this requires 4 rounds of continuous performance, but then behaves as though the spell was cast as a 3rd level bard spell. This is upgraded to mass fly at 14th level. Instead of deadly performance, the caretaker gains change of heart, allowing them to influence fascinated targets with a suggestion-like performance that acts as a geas/quest (italicization missing once) to fix dysfunctional relationships, as defined in Ultimate Charisma, and gains a bonus to do so – this is a really nice ability, though I wished a less potent version was gained sooner.

We also get a new paladin oath, the oath of guardianship, which replaces detect evil with double Cha-mod on Diplomacy (not a fan) and automatic successes of requests made to friendly targets. Smite evil is altered to smite creatures that harmed beings of lower age categories, granting bonus damage on the smite versus such targets instead of the usual undead/outsider/dragon-paradigm (nice). Instead of 6th level’s mercy, we get blindsense 60 ft. to detect creatures below the adult age category and the code and oath spells make sense.

The pdf also sports new spells, which btw. take ACG and Occult Adventures into account: Locate kin works like locate creature at a lower level, but only for kin; locate youngster follows a similar design paradigm. Mother May I is an interesting compulsion that begs to be used in a dark and rather twisted way – The subject is forced to ask for permission, requiring that they clearly state their intended actions, which you may deny via social skills! Cool! Soothing Kiss eliminates negative conditions and provides fast healing for the remainder of the spell’s duration. Finally, soulbound nanny creates a soulbound doll with your alignment and personality – it can use locate youngsters at will instead of its general alignment SP and you may designate it to nurture spellcasting ability modifier young ones. If it is destroyed, its memories are imparted on the caster. Can make for rather cool narratives!

Editing and formatting are very good, I noticed no serious accumulations of hiccups. Layout adheres to Everyman gaming’s printer-friendly two-column standard and the pdf sports 2 nice full-color artworks. The pdf sports no bookmarks, but the pdf does not need them at this length.

Margherita Tramontano’s motherly options are per se nice: While the bard has some balance-issues, the cool and interesting spells do make up for that. As a whole, I consider this a worthwhile pdf, which, while not perfect, deserves a final verdict of 3.5 stars, rounded up due to in dubio pro reo.

Missed the excellent books that complement this one rather well?

You can find Ultimate Charisma here!

You can find Childhood Adventures here!