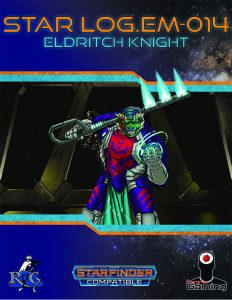 All right, after the by now classic introduction, we dive into the rules, though it should be noted that it makes sense to read this, as the design goal here was to encapsulate, in spite of the existence of the soldier-class, the flavor of the classic eldritch knight.

The eldritch knight archetype grants additional class features at 2nd, 6th, 9th, 12th and 18th level. At 2nd level, we have spell critical, which is a special critical hit effect that you can use instead of that of the weapon. When confirming a crit, you may cast a spell as a swift action, which must include the target among those affected. This does not provoke an attack of opportunity. This is problematic in as much as that the spell does not state a maximum casting time, which is not exactly a smart means of future-proofing this one. The ability should restrict the eligible spell in some way. All other class features provide a fighting style technique from the arcane assailant soldier; rune of the eldritch knight at 6th, secret of the magi at 9th, power of legend at 12th and secret of the archmagi at 18th level.

The pdf also presents a total of 4 new feats to complement the concept: Disrupting Grappler forces foes to succeed a caster level check in order to cast a spell when you’re grappling them, with DC scaling via your BAB. Enhanced Dispel Magic provides a bonus to dispel SPs that work like specific spells and extends the counterspell range to long. Nice! Riving Strike requires Mystic Strike or rune of the eldritch knight, and allows you to render opponents vulnerable to magic, penalizing saves or reducing SR temporarily with a standard action attack. You need to expend a swift action to add this, though. Will save DC scales with your highest ability score modifier and BAB or CL. Nice: A target affected by it can’t be affected again for a day, providing a means to prevent cheesing. Interesting here: Full action-using attacks do not allow for this, courtesy of SFRPG’s action economy, which means that the feat promotes more creative play. Kudos! Finally, we have Spell Severance, which once more requires Mystic Strike or the rune, as well as 1 rank Mysticism, which is really neat: 1/day, you can dispel magic a foe hit with a magic weapon, using BAB as CL. Really cool, though personally, I would have added a means to spend (a lot) of Resolve to recharge it.

The pdf closes with a nice piece of flavor-text regarding eldritch knights in the Xa-Osoro system.

Editing and formatting are very good, I noticed no obvious formatting snafus etc. Layout adheres to the colorful standard of the series and the pdf sports the nice artwork on the cover. The pdf has no bookmarks, but needs none at this length.

Alexander Augunas’ eldritch knight has a tough heritage – the classic option hasn’t been the most remarkable out there in the first place, and since the soldier incorporates much of the thematic concept, we are left with a solid, if not perfect take on the idea of the eldritch knight that goes as light step further than the soldier, but which doesn’t necessarily feel radically different. As noted, I am convinced that the spell critical class feature should be future-proofed regarding maximum casting time; apart from this one, I enjoyed all of the feats herein, leaving us with a mixed bag that is slightly on the positive side of things. Still, as far as I’m concerned, it’s closer to the 4 stars than to the 3, which is why I will round up from my final verdict of 3.5 stars.

You can get this Star Log here on OBS!