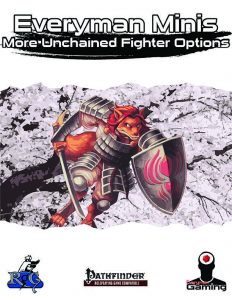 This Everyman Mini clocks in at 8 pages, 1 page front cover, 1 page editorial, 1 page advertisement, 3 pages of SRD, leaving us with 2 pages of content, so let’s take a look!

After a brief recap of the class features expanded herein, we begin with one new advanced armor training option, namely effortless shielding: You can carry items while wielding shields (excluding tower shields), but at either -2 to atk or a decrease of shield bonus by 1. You choose the penalty at the start of any action with a weapon carried in shield hand. If you have Weapon Finesse, you don’t add the armor check penalty to atk rolls when using it. Nice one and great rules-hole fix!

Next up would be a total of 8 different advanced weapon trainings: Focused Freehand lets the fighter use 1.5 times Str-mod on damage-rolls with one-handed melee weapons from the chosen weapon group. No, does not work with TWF, thankfully. Grenadier lets the fighter treat thrown splash weapons as thrown weapons for the purpose of whether he gets an atk bonus. He also adds twice the weapon training bonus to damage for direct hits. This does not stack with other such options, thankfully, but does also explicitly allow the fighter, if he has Quick Draw, to use them at the normal rate of attacks. Javelin master allows for penalty-less melee-use of javelins. Lasso expert increases the concentration check required to cast spells while lasso’d as well as the DC to escape. Break DC and AC of the lasso is also enhanced. Nice. Precision over power is cool for weak archers: The fighter does not apply the negative Strength modifier to damage with bows, and when wielding a longbow or shortbow, the fighter gets to add twice the weapon training group bonus twice to damage. Rapid refilling lets the fighter refill e.g. battle aspergillums as a free action with splash weapons. Cool! Rapid retrieval lets the fighter improve the retrieval of weaponry that usually requires a move action possible as a swift action as well. Singelton sniper reduces penalties for TWF-crossbow use.

The pdf also sports two new fighter trainings: Assess combat prowess lets the fighter identify foes via Profession (soldier) (something I also use in my home game, but only for warriors etc., not weird critters) and the training sports synergy with the size up training option. The second fighter training would be defensive mastery, which halves fighting defensively penalties to AC (does not stack with other options) – but it also makes you count as Intelligence 13 for the purpose of combat feat prerequisites.

Editing and formatting re top-notch, I noticed no glitches. Layout adheres to Everyman Gaming’s 2-column b/w-standard; the full-color art is nice. The pdf comes without bookmarks, but needs none at this length.

Alexander Augunas’ expansions for the superb Unchained Fighter cover a lot of cool, unique tricks this time around, focusing on enhancing less common tricks, enabling distinct and intriguing tricks. It’s less flashy than the first Everyman Mini-expansion, but it is in no way less excellent, providing some truly cool tricks. My final verdict will clock in at 5 stars + seal of approval.

Missed the superb unchained fighter? You can find it here on OBS!

The first “big” expansion for the unchained fighter can be found here on OBS!