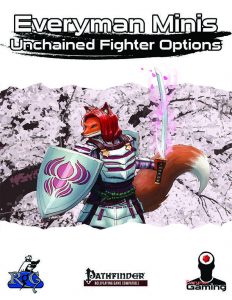 This installment of the Everyman Minis-series clocks in at 9 pages, 1 page front cover, 1 page editorial, 1 page advertisement, 3 .5 pages of SRD, leaving us with 2.5 pages of content, so let’s take a look!

All righty, there are basically three types of class features contained herein for the Unchained Fighter-class.

The first ones would be advanced armor training options: We get a total of 3 of them: Armored Dash is glorious: It lets fighters wearing medium or heavy armor ignore a number of 5-ft.-squares of difficult terrain per movement equal to Strength-bonus. This does not stack with Nimble Moves or abilities based on it. Guarded action lets the fighter, 1/round, use a shield to automatically deflect an attack of opportunity, but only while aware of the attack and not flat-footed. This costs 2 stamina and expends an AoO-use, and after using the attack, the fighter loses the shield bonus to AC unless he has Improved Shield Bash. It may be taken multiple times for multiple uses, with escalating stamina costs. I LOVE this. It makes shields matter more and retains balance. Huge kudos! The third option would be Two-Shield-Specialist, allowing the character to stack shield bonuses, but not their enhancement bonuses or effects that increase the off-hand shield’s bonus to AC. Nice fill of a rules-hole.

We also get 3 new advanced weapon training options: Knockback blow lets the fighter use bull rushes instead of melee attacks during full attacks or AoOs. The ability gets AoO-interaction right. Success also deals damage to the target and it may be used with ranged weapons, but at a penalty. Spell parry lets the fighter targeted by spells or SPs that allow for SRs expend 2 stamina points and an AoO to attempt to parry the spell, rolling 1d20 + BAB, weapon enhancement bonus and weapon training bonus with the chosen weapon. The fighter is treated as having SR equal to this amount; 1s are failures, 20s return the spell to sender as per spell turning; touch range spells cannot be sent back. This is powerful, but I really like it. If you need a customization suggestion, I’d suggest eliminating the bonuses granted by weapon enhancement and weapon training for less high-powered games. Thirdly, throwing mastery lets the character draw unhidden weaponry as part of the attack roll and may have the weapon return to his hand after the attack, making, in conjunction, thrown weapons behave analogue to bows. The ability may not be used with ammunition or items destroyed upon impact and improvised weapons don’t return, unless you have Throw Anything. Inspired!

Hack apart is basically a coup-de-grace versus objects: Provokes AoOs, but can sunder objects etc. effectively, ignoring class level hardness. Adamantine weaponry interaction is included. Additionally, 5 stamina may be used as a swift action for a sunder effect added to a successfully attack. Recuperate builds on treat deadly wounds, allowing the fighter to use it on himself; he does not regain stamina points while treating his wounds thus. Minor complaint: The rules here get it the wrong way around: The ability states that the fighter may use Heal instead of fighter level and Wisdom modifier instead of Constitution when making the check – it should be the other way round, considering how Heal works. For 5 stamina, the fighter can add a bonus to the check. On a success, the fighter heals +2 hit points per class level; higher successes also add the highest physical ability modifier (positive only) to the hit points healed. This may be used Con-mod times per day. Finally, shrug it off lets the unchained fighter spend ½ class level stamina points as a swift action to gain fast healing equal to stamina spent for 1 minute. It can be used 3 + Con-mod times per day.

Editing and formatting per se are top-notch, with the one switcheroo-glitch being my only complaint. Layout adheres to Everyman Gaming’s two-column b/w-standard with a nice full-color artwork. The pdf has no bookmarks, but needs none at this length.

Luis Loza’s options are GLORIOUS. They are mechanically-complex and center all around dealing with holes in rules, are balanced, yet potent and actually manage to make e.g. shields matter. It is baffling how much coolness can be found herein. IN spite of the minor glitch, I will settle on 5 stars + seal of approval. A must-own purchase for the excellent unchained fighter.

Missed the great unchained fighter? You can find the cool class here!

The big expansion-file for the unchained fighter can be found here on OBS!