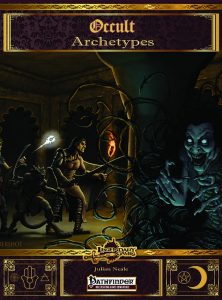 This massive collection of archetypes clocks in at 40 pages, 1 page front cover, 2 pages of editorial, 1 page ToC, 1 page introduction/how to use, 1/2 page empty, 1 page SRD, 1 page back cover, leaving us with 32.5 pages of content – quick an array of crunch, so let’s waste no time and dive right in!

We begin with material for the kineticist, namely the focus kineticist. At 1st level, these guys designate an armor and device focus that cost at least 10 gp and need to be purchased from base capital; when not wearing the armor, using utility wild talents is harder and when not wearing or holding the device, infusion blasts or composite blasts are more difficult, in all cases necessitating a concentration check. Damaged foci regenerate when the focus kineticist removes burn and yes, magic items may be designated as focus. The armor focus, as a tradeoff, grants the kineticist an internal buffer +1 at 6th level and every 5 levels thereafter, usable exclusively for utility wild talents. The device focus has a different trick: When the kineticist accepts burn, the device charges visually: For each +1 elemental overload grants, the kineticist receives a property pool of +1, up to a maximum of +6 at 18th level. This property pool is used to add magical weapon properties to the device in question, selecting the properties from a list; tehy cannot be stored in the traditional sense and new uses supersede old ones and affect only kinetic blasts; blades and blasts are not affected. Gather power requires the focus kineticist holding the device focus. The pdf notes that this class very much can act as a super hero/villain class – and this would be correct. It inspired me in a different way: Picture a world/country where kineticism is strictly regulated by the military and focus kineticists are the dominant tradition. Then picture PCs that don’t need the oh-so-cavorted foci. Yep, I think I may run this.

The God-touched kineticist begins play with an oracle’s curse and, at 3rd level and every 4 levels thereafter, the kineticist gains a revelation, with elemental alignment determining the mystery to choose from and spell-based ones are not appropriate. The DC is modified to be 10 + “spell level” +”psychic kineticist’s” Constitution modifier, which unfortunately would be two typos in the formula – that ought to be god-touched. Secondly, and more confusingly…spell level? The save DC is all screwed up and probably should be the revelation default, with Con as governing attribute. Still, pretty big hiccup. This archetype, just fyi, does not work for aether and pay for the revelations with the utility wild talent at level 2 and every 4 levels thereafter. The Mystical Kineticist does not receive an infusion at 3rd level, instead gaining a new utility wild talent and at all further levels, he may elect to gain utility wild talents instead of infusions. Okay, so far, so basic tweak-y. More interesting would be the Poisoned Earth Kineticist, who is locked into earth and non-good alignment and gains the irradiating infusion, with 2nd level providing detect radioactivity and 6th level and every 5 levels providing increasing immunity versus radiation. As a capstone, poison immunity and radiation aura makes for a neat endgame trick. That being said, the references of this archetype all point towards page XX still.

The Primal kineticist gets 1 + Cha-mod channel energy instead of 1st level’s infusion and treats blasts as good/evil and magic…which is a bit problematic, considering the value usually ascribed to aligned attacks. 3rd level nets either plague carrier or immunity diseases, depending on energy chosen. Negative energy channelers need to take void as 1st level element; additionally, elemental overflow’s bonus is doubled in the first attack per round targeting an evil outsider, dragon or undead (for positive kineticists) or good dragons, outsiders or clerics/palas for negative energy channelers. the capstone nets a slew of immunities. The psychic kineticist replaces utility wild talents at 4th level and every 4 levels later with access to psychic spells based on Int, with elemental focus also determining the selection available. The pdf also features an acid blast alternative simple blast talent for earth, the acidic boost composite talent and three infusion wild talents, one being a variant of kinetic fist for manufactured weapons and two more being irradiating infusions. The utility wild talents sport antilife/antiundeath shells, constant corruption resistance, continuous deathwatch, detect radiation…and a level 4 burn 0 dimensional lock. The latter definitely should have burn…it locks several builds….and I’m not starting with the aura. 0 burn enervation similarly could use a bit of burn. As a formatting inconsistency, one talent sports “-” instead of “0” in the burn. Spider climb, sharing adaptations…all in all, the options presented here are pretty spell-duplicate centric.

The medium archetypes sport a druidy- medium with woodland stride instead of séance, trackless step instead of haunt channeler and wild shape. The psychic channeler gains the phrenic pool at 3rd level, but does not add Wis or Cha-mod to determine points and replaces the archmage spirit with the psychic spirit, who may be allowed 1 influence in exchange for a DC/CL-increase, casting any psychic spell of a level you can cast and 1/day, you may do the latter sans influence gain. 3rd level and very 5 thereafter net a phrenic amplification. The worldly medium gets a modified class skill list and channels mundane spirits (i.e. not hierophant, psychic, archmage) – oh, and speaking of new spirits…there is now also a druid spirit, who is basically the druidic tweak of the psychic. The medium archetypes are okay, but don’t really elicit excitement from me.

The mesmerist may elect to become a Fiend Hunter with detect evil, favored enemy and Knowledge (planes) instead of Sleight of Hand – basically a nemesis archetype. Glorious Companion mesmerists gain bardic performance instead of consummate liar, glib lie, mental potency, painful stare and rule minds. Not inspired by these. The occultist may elect to become an elemental specialist, gaining school powers of the chosen element at 1st and 8th level and the archetype does have a special evocation implement for the elemental specialism spells. Mental focus is gained at 3rd level and gains 1/2 class level + Int. School specialists are close to this archetype, but instead focus on the school chosen.

The psychic may elect to become a monastic psychic – these guys get diminished spellcasting, but good Ref- and Will-saves and may use phrenic pool points to grant bonuses to Fort-saves, increase movement rate or improve AC. At 3rd and 11th level, evasion etc. are gained…so this one is kinda monk-y, but with a distinct emphasis on the casting. Psychic crafters focus on crafting and destroying objects (+1/2 class level to object damage) and also gains flurry of blows, but may only use it versus constructs, objects and gremlins…which feels a bit weird to me. The psychic savant is locked into the lore discipline and has Int govern his prepared spellcasting, but metamagic may be spontaneously applied to the casting of spells akin to how a sorceror does it. Instead of a spellbook, these guys consign spells to their psychic depths, basically an internalized hard drive/eidetic memory for spells learned and phrenic amplifications allow for the selection of arcanist exploits.

Karmic servant spiritualists serve lipikas aeons and gain knowledge bonuses and when a creature is struck by the servant’s melee attack, a link is established on a failed save that makes the victim suffer damage when damaging the servant. Interesting one and tied well to the cool akashic record locale. The phantom lord spiritualist has diminished spellcasting…and does something I am not a fan of: It basically makes the spiritualist more summoner-like. Evolutions. Base forms. The whole shebang. I’m not the biggest fan here, considering that I consider the spiritualist basically to be the more balanced and interesting summoner. The option to change evolutions on the fly at 8th level also sends my bells a-ringing. The next archetype would be the relic hunter, who receives a modified, Int-based mental focus and at 2nd level, resonant powers are included in the deal, with 3rd level providing a nice, surge-like boost to skill/ability-checks based on mental focus expenditure. If that was no inkling enough for you: Bingo, 8th level and every 5 thereafter net investigator talents. The archetype is an interesting tweak of the engine and counts as one of the more interesting hybrids

Beyond that, the pdf provides a massive system to eliminate the kind-of-power-point system and convert that aspect into the SPs. The conversion table for upgrading psychic magic to the new version to determine SP-arrays of e.g. critters is damn cool and useful, but organization-wise, I don’t get why it’s in the middle of the archetypes, instead of where the system’s introduced. The pdf also sports several psychic magic creature entries. This alternate system, while certainly not for every table, is concisely presented and leaves not much to be desired regarding its execution.

Editing and formatting are good, but not as precise on a formal level as I’ve come to expect from Legendary Games. Layout adheres to a nice, two-column full-color standard with solid artworks supplementing the aesthetics of the book. The pdf comes fully bookmarked for your convenience.

Julian Neale’s offerings here leave me somewhat torn. The supplemental tricks to modify the monster entries can prove to be a godsend for any group who dislikes the default presentation of psychic SPs. The archetypes themselves provide generally interesting tweaks of the respective systems and offer a lot of hybrid options for the occult classes…and this is where my issue with this pdf lies. Usually, Julian Neale’s offerings take a bit to grow on me, but grow they do. His design style focuses on the tweaking of systems and mechanical combo-tricks and the same can be said here. At the same time, however, the archetypes herein, as loathe to say as I am, mostly failed to really impress me – the focused kineticist, in spite of his name, actually proved to be the most inspiring of these, at least for me. The new options the archetypes herein provide, generally, are not new, but rather blend existing tricks in new combinations…which is not bad, but I was missing, for the most part, options that render the combos more than the sum of their parts – you know, instead of having a medium with druidy elements, where are the synergy options between the two aspects, the tricks that ONLY the archetype can pull off? The archetypes herein let you make hybrid concepts easily, but generally don’t have the tricks to elevate this beyond the sum of the concept – in short, the options imho could use more unique selling propositions to complement their conservative design aesthetics and are closer in design paradigm to the ACG than Occult Adventures. This is not a bad book by any means of the word – far from it. I can see this work in many a game and it does provide a lot of nice combo options. But that doesn’t really change that I, as a person, did not get much out of this book – it just lacks the je-ne-sais-quoi, the step beyond that pushes this over being a nice supplement to being a great one. That and the minor formal hiccups make me settle on a final verdict of 3.5 stars, rounded up to 4 for the purpose of this platform.

You can get these archetypes here on OBS!