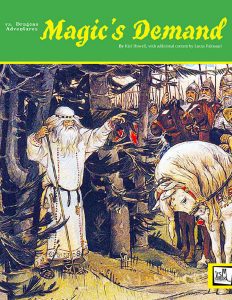 The first adventure for Vs. Dragons clocks in at 13 pages, 1 page front cover, 1 page editorial, 1 advertisement, 2/3 of a page SRD, leaving us with 9 1/3 pages of content. It should be noted that, much like the main-book for the system, the layout is a 3-column-standard in kinda-landscape, with 8.5’’ by 11’’ as the size; this means that there is quite a lot of text per page.

All right, only GMs around? Great! About a month ago, strange things began to happen in the quiet village of Hazelmoure, beginning with a three-beaked chicken and escalating to iridescent clouds, etc. The strange happening have the townsfolk concerned, seeking shelter in the temple by day, the tavern by night. The tavern is operated by the elf Eldwind (full stats provided) and may act as a start of the adventure – though just finding weird occurrences will do the trick as well: A full page of strange occurrences, governed by simple draw, can be used to establish a sense of weird magic. Drawing a Spade is suggested as a means of scene progression, though personally, I’d suggest only employing this after a threshold of a certain number of such occurrences. The effects include spontaneous out-of-season blizzards, reverse gravity, or the whole town being reduced to 1 toughness AND extreme pain – ouch! (Minor complaint: “is reduce” should probably read “is reduced.” – unfortunately not the only such glitch; we e.g. have missing “as” and similar minor hiccups accumulate throughout the pdf.)

Now, the village is obviously the focus of a strange font of magic and the pdf provides rules for this, allowing for a fluctuating amount of magic. The rules here are nice, though I was a bit puzzled by the chance of taking points of pain when tapping into the font – RAW, pain is not tracked in points in Vs. Dragons, but in steps. Just as the PCs are investigating the strange phenomena, a “hero” comes into town: Dracom pretty much immediately ends the weird phenomena, stealing the PC’s thunder, big time. He is, unsurprisingly, hailed as the savior of Hazelmoure, immediately instated into power, outlawing magic and non-authorized weapons. Yes, the PCs will not be happy, but hey, they may be hired as village guards.

Dracom then proceeds to call for taxes and the PCs will have their hands full, as a random creature table suddenly sports an influx of strange and dangerous new creatures the PCs will have to handle. Things will become personal at the very latest when Dracom sends villagers to collect the vanquished monsters and, worse for most players, the loot! The PCs, at one point, will have to confront Dracom – who is actually a magic eater dragon in disguise – and the PCs should take care, for collateral damage is very real, considering the power of the dragon. The pdf provides suggestions for Good of Bad outcomes of the adventure.

Editing and formatting are not bad, but sport a couple of unnecessary glitches, some of which influence the rules-integrity of the chaotic magic rules in minor ways. As mentioned before, the 3-column layout is elegant and the pdf sports thematically-fitting b/w-public domain-artworks. The pdf comes with bookmarks.

Kiel Howell, with additional content by Lucus Palosaari, weaves an interesting, brief yarn here: The module can easily be expanded to the desired length: Due to all important aspects being pretty modular (occurrences/combats), this can work equally well in the context of a convention slot or for a longer game at the table. The strange occurrences in the village are nice, though the Ace-effect can be pretty lethal; similarly, the monsters are not easy – there is a definite chance of death here. The adventure is fun and delivers, considering its limited page-count. All in all, this is a pretty nice scenario. My final verdict will clock in at 4 stars.

You can get this nice adventure here on OBS!