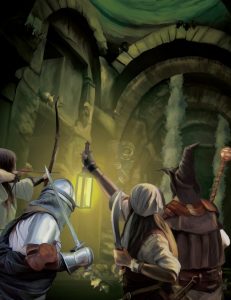 This massive module clocks in at 76 pages (if you take cover/editorial/etc. away) and my review is based on the print version I received at Gencon in exchange for a fair an unbiased review, which is also why you’re seeing this review so soon after the module was made available to the public. The review is thus based on the physical copy of the module.

Now, first things first – this module was made to support Gaming Paper’s useful and pretty amazing mega-dungeon gaming paper-collection – i.e. the massive map of this module is made up of the respective sheets, allowing for an easy, battle-mat-style exploration of the module and doubling as a gigantic, player-friendly map. If you’re not interested in using the accessory (Why?), you’re covered, though – the pdf does sport the overview map of the dungeon and can be run without using the mega-dungeon sheets with minimum hassle. I honestly wished all support/tie-in products had this level of service.

Anyway, this does mean that encounter-number/room-numbering is a bit different, with the respective encounters pointing towards the identifying numbers/letters of the gaming paper sheets. If that sounds confusing, rest assured that it’s not when you look at the book.

One more thing: While the adventure takes place in the town of edgewater, it remains very much a backdrop and can easily be replaced with any coastal town with a sufficiently developed sewer system and access to a trade-route.

And this is pretty much as far as I can go without going into SPOILERS. Potential players should jump to the conclusion.

All right, only GMs around? Great! So, the fortunes of edgewater have turned for a while now: The town, currently led by former adventurers, has managed to use subterfuge and intrigue to generate an economic upswing and hamper their competition…not with the most ethical means, but yeah. Their competition, Deep Salt Bay, has seen a sharp decline, fueled by greed and clever maneuvering…but not everyone in the town was willing to just accept edgewater triumphing…and thus a scheme most dastardly was hatched.

The PCs, while in edgewater (or any town you choose to substitute for it), are confronted via one of MANY, extremely detailed hooks, with the basic premise: Plague has come to town. Not just any plague either – one that makes both bubonic and septicemic plagues look like child’s toys…and worse, one that seems to mysteriously resist regular attempts at curing it via magic, going only into remission to resurface later. Yeah, you can go pretty apocalyptic there, if you’re going dark fantasy. The plague is called civilization’s downfall (theatrical – the pdf acknowledges that!) and was engineered by a cabal of plague druids hired by Deep Salt Bay to wreck edgewater. The druids are spreading the plague with the help of a cadre of wererats through town. WAIT. Wait a second.

I know, I know. The plot as such is pretty old and not too remarkable. In fact, I’d be yawning pretty hard if I heard this set-up. But wait. The module does not feel like any other plague or sewer module and exemplifies that, in adventure crafting, the devil is often in the details…but so is beauty. I mentioned extensive hooks, right? Well, the first act sports a massive array of different vignettes, from the plague victim stumbling into the bar, to muckrakers drawing carts on which the dead are put to being directly hired. All of these hooks feature EXTENSIVE rules and even read-aloud text…and they can be combined at your leisure, with commentary providing guidance regarding the respective tones evoked. Preventing a mob/riot goes so far as to provide guidance for non-violent conflict resolution.

Speaking of extensive guidance: The module deals with a hidden agenda BBEG, obviously. At level 7. I have never in my line of work seen this extensive an array of well-written guidelines for the GM to handle scrying, divination and similar aspects of the game. The pdf discusses *A LOT* of potential issues and shows an intricate care regarding suspension of disbelief. It is quite evident that the majority of the module is an exploration of edgewater’s sewer system. I know, sewer-level. No one like those, right? Well, the details provided are AMAZING and if your players are as smart as mine and pick up on inconsistencies with the fervor of a starved bloodhound, then this module has your back: You see, from discussions of bronze, copper, etc. to the science of sewer gas explosions and their likelihood, the module manages to be incredibly consistent and evoke a sense of realism I have never seen before in a sewer-dungeon.

More importantly, the whole dungeon manages to be incredibly ALIVE. Not sterile at all. It makes sense, from the big dynamics to the small: The sewer system features tides (if you need a tide tracker – 4 Dollar Dungeons’ superb Horn of Geryon has one); at night, the bats swarm to hunt. Otyughs leave those wearing muckraker uniforms alone. The two antagonist factions behave in a concise and believable manner. How deep do the details go? Well, a wererat alchemist dreams of taking control of her gang – PCs with detect thoughts or similar means could glean that and use it to their advantage. The patrols provided for the enemy factions come with advice on how to make one statblock feel different when used.

The sewer system sports notes on methane-explosions for areas (including real world chemistry explanation!), rules for storm surges, the horrid psychological effects of being drenched by overwhelming humidity and stench – in short, the dungeon uses hazards PERFECTLY. It also uses the adversaries in a similarly concise and evocative manner: The foes behave smart and the living, “realistic” dungeon is very much one of the things that make this stand out.  When you find several chests, they all have different traps. When you come to a junction you can’t cross, the pdf notes several means, both mundane and magical, to solve the problem. When you come to a combat dealing with multiple foes, the sidebars provide ideas and guidance how to simulate the chaos of such an encounter. When an area would work well as an ambush location, the pdf draws your attention to it.

Oh, and the adversaries: Beyond the aforementioned main factions, hydras and several creatures from the excellent Sewer Bestiary (statblocks included here) provide ample versatility in that account. Speaking of which: The NPC-builds for the foes are versatile and in the end, after exploring the sewer, the PCs may still need to take on the command vessel of the plague druids, anchored in the sewer dock…which makes for a truly furious experience that requires brains as well as brawns for the PCs to survive. Oh, and in the aftermath, there is still the problem of the true culprit being none other than Deep Salt Bay’s burgomaster’s wife, a powerful bard in her own right…and putting her to justice, in any way, will be a challenge indeed. Have I mentioned that GMs even receive some notes on the limitations of certain spells, where applicable/potentially problematic? This is the most considerate module regarding the vagaries of adventuring I have seen in ages.

Have I mentioned the magical sparring dummy, the giant catfish or the dire raccoon?

Editing and formatting are very good. I noticed some very minor cosmetic hiccups here and there. Layout adheres to Gaming Paper’s elegant two-column b/w-standard and the pdf sports several nice b/w-pieces of original art. The dead tree version is saddle-stitched and paper-quality-wise, nice.

Damn, this was hard for me – and I’m pretty sure I failed, but here it goes: This module is AMAZING. It frankly has no right to be this good. The plot-line, the environment, the primary adversary faction choices – none of these excite me on paper. If I had them summed up for me, I’d shrug and move on. I implore you to not do that here. This module manages to provide a level of consideration, detail and internal consistency only VERY rarely seen in any system, much less one as rules-intense as PFRPG. It clicks. It comes together. It feels alive.

Usually, sewers are a designer’s lazy way out to generate a dungeon with a certain theme right under a village. They are set-pieces, window-dressing at best. This sewer feels alive. It is a fantastic eco-system that embraces all the things that I always wanted to see in such an environment. In fact, for the very first time in my roleplaying career, I have found a module that is a sewer-crawl where the very dungeon explored has more character, more unique peculiarities, than most non-sewer dungeons. In short, this module represents the rebuttal, delivered with panache aplomb, to all the negative clichés associated with the dungeon type. It also represents a huge step up for author John Ling, who so far provided good, even very good, modules – but this goes a step beyond and reaches the lofty realms of excellence.

The author acknowledges with meticulous care non-dice-roll-dependent problem-solving, magical means and manages to evoke a sense of internal consistency that is very hard to convey in a review, but that should nonetheless be made very explicit: I have rarely seen any module feel this internally consistent, this alive; this is an excellent example of a living dungeon set-up: Considerate, intelligent, well-written, versatile and yes, evocative even, with hazards galore, SCIENCE! and diverse challenges, this is now my reference module for any adventure that features a sewer. This is the best adventure John Ling has penned so far and the best module released by Gaming Paper since the legendary Citadel of Pain. In short: GET THIS. I mean, one of the (optional!) lead-in hooks has a chase…and we get chase card obstacles! It’s a perfect example how diligence, cohesion and consistency can conspire to make a module play in an absolutely amazing manner. My final verdict will clock in at 5 stars, + seal of approval…and this also receives a nomination for my Top Ten of 2016, even though its pdf went live only recently. This is the new reference module for sewers and all excuses for making these areas lame are hereby null and void. Turns out sewer-levels can be fun, after all!

You can gt this great module here on OBS!

You can get the supplemental gaming paper here!

You can find the awesome sewer bestiary here on OBS!