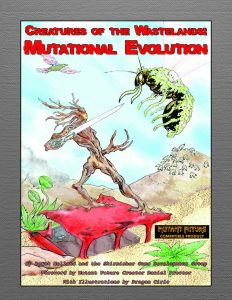 This bestiary clocks in at 54 pages, 2 pages of editorial, 1 page ToC, 2 pages of advertisements, 1 page SRD, leaving us with 48 pages of content. The front- and back-cover are provided in their own pdf and thus are not part of this tally.

This pdf was sponsored by one of my patreons and moved up in my queue as a prioritized review.

All right, this pdf, while intended for use with Mutant Future, is easily usable in pretty much any OSR-game…IF you have Mutant Futures. (Preferably also Creatures of the Wastelands.) I strongly suggest getting at least the Mutant Future parent book before checking this out – without it, only the methodology and basics of the critters herein will be usable and the respective monsters lose a bit of their depths and plausibility. (And its art-free version is FREE!) Form-wise, we get no. encountered, alignment, 30’ base movement rates, descending AC, and saves are denoted by L + a number – e.g. “L4” – which translates to a character of 4th level; apart from requiring the parent book, adaption is, as a whole, quick and painless.

The bestiary knows a couple of special attack tricks: Acid needs contact with skin and may be taken off by using special substances; once contact is made, no subsequent attack roll is required to inflict damage. Swarming animals and similar creatures may cause confusion, which means you roll, with one of 3 results: Attack the attackers, attack your allies or flail uselessly around. A bit more differentiation would have been nice here. Monsters capable of flight may execute dive attacks, their equivalent of charges. These inflict double damage and on a roll of 18+ and sufficient size provided, the monster can grab and carry off the attacked creature. That is a bit weird, as theoretically, superbly-armored creatures that couldn’t be hit by an 18 would be carried off RAW. On another note, dive attacks are usually not necessarily executed to carry off prey – at least not by all animals. A crush to the ground option would have been neat.

Paralysis duration is standardized at 2d4 turns and the pdf knows 20 classes of poison, which you get, collated, in the back of the book – this list also is d%-friendly for randomly determining the class. Radiation is categorized in 10 classes, with escalating damage and half damage on a successful save. This would be once more an area where I wished that the book sported a bit more differentiation and unique effects. Radiation, as provided here, mainly boils down to damage, though 7 sample mutations are provided -still, this imho would have been a nice way to expand the Mutant Futures-material beyond reference.

Where applicable, less intelligent creatures will have 1d6 +2 WIL, while intelligent adversaries will have 3d6 WIL; super-smart critters may have 2d6 + 9 WIL. Regarding terms, “aggregate” is used to denote a creature fused from multiple beings (or via parasites/symbiosis); base stock denotes the unmutated base critters; elder people are the pre-cataclysm humans; “instar” is the immature stage in the life cycle of insects and plant creatures and the shattered lands are the places where so many weapons struck, only a desolate wasteland remained.

Now, one of the strengths of mutant future would lie within the concept of mutation and how to visualize it: Here, this is provided in a handy, applied manner, via family trees: Subsequent mutations and drawbacks are accumulated and further developed – basically, this is the big unique selling point of this book: While most make-am-monster-books focus on generating a single, odd critter, this one instead focuses on establishing families and genera, adding a sense of biological plausibility to the material within. Indeed, this premise is not just a pretense, but rather a crucial component of the book and its appeal; this sense of authenticity represents one of the best aspects of the supplement.

This btw. extends to the concept of how to portray mutant herds and how accelerated evolution influences the dispersal etc. of the mutants. The creatures themselves, as mentioned before, are organized by family trees – and it should be noted that a few of the creatures sport unique mutations. Furthermore, the design-process of the creatures takes survivability-enhancing factors into account – i.e. better senses, natural armor, etc. are included. Among house sparrow, we can find little creatures that tag targets for others; there are birds that have developed sharp spines. There are birds that can camouflage as giant bees and that can regenerate bodyparts. Where one generation has often bled out, subsequent critters developed tougher skin and aberrant form as well as a lashing tongue; an alternate evolution instead focused on generating colonies with warning shrieks – the further along the generational line we go, the stranger and weirder the critters become. This, ultimately, is perhaps one of the best aspects of this book – by applying logic and some tweaking, it teaches by example on how to potentially develop your own array of truly strange and creative critters.

Beyond the aforementioned bird family, I particularly enjoyed the stinging nettle family – think of them as animated nettles that wail when struck…and that’s generation 1 for you. There is also a lab accident here – a nettle with human eyes and flesh spliced in. Weak. Vulnerable. And prone to throwing FIRE. A lot. Yes, you should not approach that nightmarish plant. Surprise. Yes, it gets weirder. Moving plants. Some that generate misty force fields. And some that sport mouths. Many, toothy mouths. What could be worse? Well, what about flying ones? Or nettles that make their stinging hairs airborne and highly toxic? Yeah, a fun time was had by everyone at that picnic…

Feather scrubs are plants that burrow into…things. Soil. Trees…etc. – When you approach, they like to supplement their diet with protein, by means of lance-like roots…or by becoming plant-mines. Oh, and sentience, hijacking and animating plants – the evolution sketched here sent a shiver down my spine and a smile to my face. The family is interesting, cool, and intensely creepy.

Editing and formatting are very good, I noticed no undue accumulation of hiccups. Layout adheres to a 2-column b/w-standard sans frills or grand graphical elements, making the pdf pretty printer-friendly, if not too aesthetically-pleasing. The b/w-artworks provided for some, but not all creatures, are generally okay, if nothing that will get most folks too excited. The pdf comes bookmarked with detailed bookmarks for the respective headers, but not for individual creatures. The book and cover-pdf come in two versions – one high-res (better for printing) and one low-res (better for electronic devices).

Derek Holland and the Skirmisher Game Development Group deliver a book that I ended up liking a LOT more than I figured I would. While I would have loved to see a bit more in the vein of expanding the mutations and attacks beyond the already impressive array of the parent book, I really enjoy the book not necessarily for its creatures (though I did end up smiling a lot while reading the entries!), but for the applied mutation paradigm, for the design-school employed here; with some tweaking, the referee can gainfully apply this strange biology beyond the confines of this book. We have a supplement that teaches by example and does so in a rather impressive manner.

The content here is really neat and made me wish that the book offered a bit more on the aesthetics side as well; however, I have always prioritized content over presentation and the content that is here is really, really neat – hence, my final verdict will clock in at 4.5 stars, rounded up for the purpose of this platform…with one caveat: Sans the parent book/and/or a willingness to work with it, you should detract a start and round down instead. You should definitely be familiar with Mutant Futures – while advertised as Labyrinth Lord stand-alone compatible, the critters would lose a TON of their appeal sans Mutant Futures’ rules.

You can get the FREE art-less version of Mutant Futures here on OBS!

You can get the regular version of Mutant Futures here on OBS!