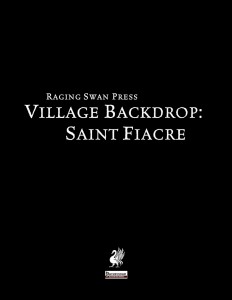 This installment of RSP’s Village Backdrop-series is 12 pages long, 1 page front cover, 1 page advertisement, 1 page editorial/ToC, 1 page SRD and 1 page back cover, leaving us with 7 pages of content, so let’s take a look at the settlement

Saint Fiacre once was the hamlet Verton – before the eponymous saint defended the hamlet single-handedly from a whole tribe of sahuagin. Ever since this time, the place has garnered a reputation for being bar supernatural evils, a respite for the weary soul. The village, as provided, sports not only a beautiful map and the series’ unique level of detail – with dress, nomenclature, marketplace and rumors all being part of the deal.

Alas, the times of calm have been at an end for a time – the town is in the eye of a storm and doesn’t even realize it. While, of course, there is a kitsune to be found (this is Alexander Augunas, after all), this time around, the central conflict is another – or better, the conflicts. The first of them would consider a story of redemption: The orphanage erected in honor of Fiacre’s lover Euphrasie has a gruff caretaker with a criminal past – a past that now has caught up in the guise of a powerful inquisitor (with full stats). And if that doesn’t gel your imagination, you can still make the orphanage a Joker-style school for criminals right under the auspice of the righteous. As a minor nitpick – the race of the inquisitor has obviously been changed during the writing of this pdf – he is once quoted by a wrong name, namely “Jérôme Javert,” when the inquisitor is otherwise called Lothair Dol.

In the end, that is not the doom that has come to this town – let’s just say that Fiacre has a subtle, deadly threat literally growing amidst the townfolk, one that may spell doom for the village and lands beyond – and one that sent shivers down my spine. What kind of threat? I’m not spoiling that. 😉 Let’s just say that, with a twist, Voltaire’s “BRAINS!”-song kind of hits the nail on the head. Suffice to say, the former and latter story can easily be entwined and amplify another- at least that’s what any DM imho can easily achieve.

Editing and formatting are top-notch, I didn’t notice any glitches. Layout adheres to RSP’s smooth, printer-friendly two-column standard and the pdf comes with full bookmarks as well as a nice map, of which you can, as always, download high-res jpegs on RSP’s homepage. The pdf comes in two versions, with one being optimized for screen-use and one to be printed out. It should also be noted that this pdf sports more of RSP’s awesome b/w-artwork than usual for village backdrops.

Alexander Augunas’ village backdrop not only has 2 more pages to shine than most village backdrops, it also sports some definitely superb imagery and flair – from the versatile hooks woven into the frame of this village to the versatile set-ups, this pdf delivers – and yes, I did only barely touch upon the small stories of local color woven into the fluff here that can help to make this place come to life. With one of the scariest opponents in the whole series, Alexander Augunas’ Saint Fiacre is, for once, a village in which massive adventurer-paranoia may save the day.

All right, I’ll just admit it – this pdf hits all the notes I really enjoy in a settlement – useful for more than one storyline, with unique local color and dangerous adversaries, this settlement provides a rather nasty surprise and has a great potential for netting the PCs an uncommon squire/protégé.

In the end, there is not much one can complain about – this place is awesome and can be used to tell some nice stories and serve as an unobtrusive backdrop for adventures – until it becomes the adventure! My final verdict will clock in at 5 stars + seal of approval.

You can get this glorious village backdrop here on OBS and here on d20pfsrd.com’s shop!

Raging Swan Press is also running a kind of subscription-like Patreon that allows them to pay their freelancers better rates –here’s the link for the patreon!