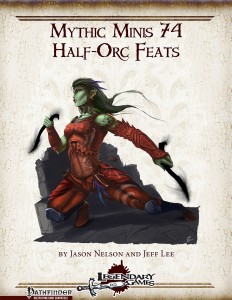 -Destroyer’s Blessing: Regain only one round of rage per round, but heal damage when breaking objects or mitigate exhaustion/negate fatigue/heal ability damage.

-Ferocious Tenacity: Use feat more than once per day, with rounds of rage expenditure decreasing damage. This one is pretty awesome!

-Gore Fiend: Increase moral benefits when criting in melee or being crited while in rage, stacking. up to a maximum of your normal morale bonus.

-Surprise Follow-Through: When hitting more than one creature via Cleave/Great Cleave, render one creature flat-footed.

-Improved Surprise Follow-Through: When using Great Cleave, all foes you hit are treated as flat-footed until hit/your next turn. This one is very powerful…but also damn cool.

-Resilient Brute: Use the feat whenever you take damage, not only in response to crits and use it additional times, powered via mythic power. Non-mythic creatures only deal 75% damage against you as nonlethal when using this feat.

There is more to be found on the SRD-page:

-Tenacious Survivor: Higher Threshold before dying and use mythic power to prevent gaining negative levels with a means to be saved even when killed. Awesome one!

-Thrill of the Kill: Regain rounds of rage and also gain free mythic surges, but both must be spend before one round has elapsed, avoiding balance-issues here. Additionally, mythic foes defeated allow for (very) limited mythic power regains.

Jason Nelson and Jeff Lee provide a nice array of half-orc feats herein that run the gamut from okay to being awesome – particularly the defensive feats contained herein are pretty much awesome and should prove useful indeed in mythic games. All in all, a nice pdf that deserves a final verdict of 4.5 stars, rounded up to 5 for the purpose of this platform.

You can get this cool mythic mini here on OBS and here on d20pfsrd.com’s shop!
Endzeitgeist out.