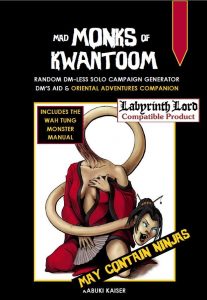 This massive setting-supplement/adventure clocks in at 229 pages, 1 page front cover, 3 pages of editorial/introduction/ToC, 5 pages of SRD, 1 page advertisement leaving us with 219 pages of content. The pages are laid out for 6’’ by 9’’, meaning you can fit up to 4 pages on a given sheet of paper, should you choose to print this out and have sufficiently good eyesight.

Soooo…oh boy. Where to start? This is the second supplement by Patrice Crespin that can be used as a GM-less solo-adventure/campaign, so that would be the first use of the book. The basic formula of the engine of playing the game sans a GM, the best and most impressive aspect from “Ruins of the Undercity”, has been retained – here, the city is the eponymous Kwantoom, while the dungeon would be the 1001 Pagodas of Death. Since I already covered the mechanics and design-paradigms of GM-less playing in my review of aforementioned book, I am not going to bore myself or you by just repeating the same information with filed off serial numbers. Suffice to say, it works, from an engine stand-point, and admirably so.

That being said, the Ruins-book did suffer from a lack of distinct identity, details and usefulness beyond its procedurally-generated dungeon-aspirations.

I honestly did not expect this book to go to such lengths to change that. Mad Monks of Kwantoom does sport, again, like ruins, a single page of background, but proceeds to provide a potential for adaptation to a more Western medieval environment. As before, we assume Labyrinth Lord as the default rules-set – but this is where the similarities frankly end.

You see, this book, beyond its solo-play options, also doubles as basically a massive Oriental Adventures-style sourcebook for LL. This includes no less than 5 races: Bungayas, Kappas, Kitsunes, Tanukis and Tengus are covered – all with proper ability score modifications, minimum scores, level caps – the old-school gaming staples you expect. This would also be a good place to note that, yes, the red annotations are back – however, this time around, they actually are genuinely funny in many instances, providing a tongue-in-cheek commentary that made me smile time and again. Balance-wise, I have no complaints regarding the respective races and how they are presented.

A total of no less than 7 variant classes can be found in the book as well. If you don’t meet the minimum requirements, you just get them when using this in solo-play – and no, the monks don’t need to be lawful. They’re mad monks, after all! The variant monk provided clocks in with Str 12, Dex 15 and Wis 15 as requirement, and Wis as prime requisite. They get d4 HD and have a maximum level of 17. They do get a couple of restrictions and may deflect even magic and they even get a short-rest like, limited HP replenishment 1/day. When fighting without weaponry, they choose one of 8 martial styles, which modifies abilities, damage and AC. And yes, standard monk is still possible. 2nd, 3rd, 4th, 5th, 8th, 9th, 10th and 12th level provide unique abilities. All in all, the variant monk is a potent class as far as LL is concerned, but sports a surprising survivability and is fun and more precise than what I expected. I really like the fact that it sports some player agenda.

Fakirs would be ascetic monks who get limited cleric spellcasting at higher levels, as well as gaining control over weight etc. Kabukis are…well kabuki-ish monk performers. We also get notes on ninjas, ronin monks and shapeshifters (who later gain limited magic-user spellcasting), while swordmasters/kensai are basically the weapon-using monks. The rules-language for these variant classes (if you’re familiar with new school games, think of them akin to PFRPG’s archetypes in that they modify the rules-chassis of the class) is pretty precise and allows for a sufficient amount of choice and differentiation, which is really neat. Advice on increasing the power of monks, if desired, is btw. provided. We also get notes on multiclassing as well as a brief FAQ regarding these new rules-components.

Now, I’ve claimed before that the structure of this book is akin to “Ruins of the Undercity”, and while this is true, it is at the same time an imprecise generalization. You see, the city of Kwantoom is actually much better in differentiating its sections – it is not abstract to the same point: You choose a district, check for encounters and events, check search chances for shops, availability, recruiting and then rinse and repeat, as required. So yes, we’re actually differentiating between different subsections of the city, which contributes a lot to making the city-section feel more organic, alive, and less redundant. In short: The replayability is not simply based on generic set-pieces, there is simply more soul here. And yes, we get a full-color map of the city. The scope is also different: There simply is much, much more going on per district. This goes to the point where, honestly, this makes for a great setting supplement for dressing in Oriental Adventures-style settings. Similarly, returning for leveling also includes notes on purchasing houses, etc. and 20 different special events that may happen upon returning to the city, making the experience more modular.

In fact, this unique and intriguing component of the pdf, the honestly interesting quality of a sourcebook, also extends to the magic items. For example, there are 4 unique crickets. Yes, crickets. Yes, live crickets. There also are 6 different magical fortune cookies. And jasmine bows. Magic masks and puppets…so yeah, this is amazing. Honestly, I’ve seen a TON of WuXia-themed gaming sourcebooks, but the focus on unique ideas here is amazing and I’ve seen most of these item classes never before. So yeah, impressive. Now, it should also be noted that the book introduces lucky charms – no less than 100 of them. They have a break condition, and when a character violates it, they cease to function. Moreover, they can take a multitude of shapes – a table of 25 entries, with sub-entries, ensures that lucky charms will remain unique and engaging.

Now, as far as the exploration of the basically infinite, procedurally-generated dungeon goes, it does follow the same paradigms as Ruins of the Undercity – we get starting geomorphs (12, this time around), monster matrix, and tables upon tables to determine chambers, corridors, etc. – so the structure per se is different. However, there are two crucial differences that adds an impressive amount of unique character to the dungeon as you generate it. The first of these would be the massive Wah Tung Match Co. monster manual: The aforementioned company created cult classic, colorful renditions of monsters and characters on their matchboxes – no less than 48 unique creatures are provided for select pictures taken from these, all sporting pretty detailed background information.

The section on personal goals for characters has been greatly expanded, and we once more get a table f quirks and former backgrounds. There is more that sets this apart from its predecessor, namely the fact that we actually do get a secrets-chapter. This chapter contains basically exciting boss-encounter/special rooms – some of which sport subtables, while others significantly modify the sequence of events encountered thereafter. This chapter provides some really cool components, and builds on the gloriously weird angle some of the entries sport.

Editing and formatting are very good – apart from a few minor hiccups, I noticed no serious glitches, with rules-integrity being surprisingly concise for the amount of content provided. Layout adheres to a 1-column b/w-standard with red annotations and is printer-friendly. The full-color cartograhy of Kwantoom is nice and the use of the Wah Tun matchbox pictures for monsters is genius and flavorful. Big kudos there. The pdf comes with nested bookmarks, though they could be a bit more detailed. I can’t comment on the print-version, since I do not own it.

Patrice Crespin’s Mad Monks of Kwantoom make good of the promise of “Ruins of the Undercity” – the book is an actually engaging GM-less solo-adventure, courtesy of the amazing backdrop, the bonkers ideas, gonzo components and vast amount of internal differentiation options. The book doesn’t become redundant and the unique secrets and more detailed goals help further to make this work as an engaging module.

Beyond that, the book actually manages to excel at being an amazing GM toolkit for old-school Oriental Adventures as well. Instead of just retreading the same old tropes, the book takes the high road and embraces the gonzo aspects of the mythologies and its tropes, succeeding in actually providing a distinct voice that goes beyond a simple retread of the same information we’ve seen time and again.

In short: This is somewhat of an “eierlegende Wollmilchsau” – an egg-laying wool-milk-pig; if you’re not familiar with the German expression, it’s used to denote a non-existing über-animal that serves all functions. This book is just that and works surprisingly well on many levels: The variant monks and races should work sans snafus in all LL-campaigns; the monsters are unique and the magic items creative. The tables and dungeon-generation aspects can be used by a GM for random dressing and loot and the secret-section basically provides set-piece encounters. Kwantoom as a city is also interesting – in spite of mostly existing in tables and stuff that happens. In short, no matter how you look at this book, it delivers.

It also manages to secure its own flavor and identity, which is another big plus. In short: This is an inspiring book well worth the asking price. My final verdict will clock in at 5 stars + seal of approval.

You can get this inspiring, gonzo (optionally solo & GM-less) toolkit here on OBS!

You can find the print version here on Lulu!