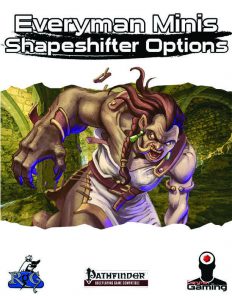 This installment of the Everyman Minis-series clocks in at 11 pages, 1 page front cover, 1 page editorial, 5 pages of SRD, 1 page blank, leaving us with 3 pages of content, so let’s take a look!

Now, to make that clear: The options herein are intended for Everyman Gaming’s fun and flavorful Shapeshifter class, introduced in the Paranormal Adventures-book.

We begin with a new feat, which represents a base engine tweak: Corrupt Adaptation allows the shapeshifter, whenever he would gain a shapeshifter adaptation, to instead gain a shapeshifter corruption. What’s that? Well, 5 are provided, and they are basically “creepy” and slightly more potent options: Abnormal reach increases the reach of a chosen adaptation by 5 ft. Abnormal senses nets darkvision 30 ft. in animal shape (or +30 ft., if the shape already has darkvision); subsequent taking of this corruption further increase darkvision and then blindsense. Alien mind nets +2 to saves vs. mind-affecting effects in animal shape. Alien physiology nets +2 to saves vs. disease, exhaustion, fatigue and poison in animal shape. Finally, 25% chance to ignore critical hits and sneak attacks that stack with light/moderate fortification, but not other abilities. The minimum level-prerequisites are solid for all of them.

The second kingdom would be the Plant kingdom (Dexterity, Constitution), which nets the following base shape properties: Undulatory (blindsense 30 feet, low-light vision, natural attack [slam], terrestrial), biped (limbs [arms 1; legs 1], low-light vision, natural attack [slam], terrestrial), or centiped (limbs [legs 50+], low-light vision, natural attack [slam], terrestrial). This wealth of options also is represented in the shape, which can range from Tiny to Gargantuan. Speed of plants is 30 ft. for bipeds, 10 ft. for others. 2nd level nets the skilled ability for Stealth, but only in the plant’s native environments. Additionally, you get the varied abilities base ability. This base ability grants you any of the following abilities that the creature you plant shape is tied to possesses: darkvision 30 feet, energy immunity or energy resistance (grants energy resistance 1 per shapeshifter level), vulnerability. Finally, you gain a +2 bonus on saving throws made against mind-affecting effects, paralysis, sleep, and stun while assuming a plant shape. 8th level adds savage spirit bonus to AC twice when in plant shape, once as dodge and once as natural armor. Additionally, the varied ability is expanded to encompass constrict, grab, poison and darkvision. At 15th level, DR, farther darkvision, greensight, pull, push, etc. are also provided – the higher level options, in essence.

Now, the pdf provides no less than 3 subkingdoms as well, one of which is based on the plant kingdom – that would be the Mi-Go subkingdom (Dexterity, Intelligence), which nets a Medium shape size, hexapod shape, blindsense, claws, etc. as well as 30 ft. speed and 20 ft. clumsy flight (which *may* be an issue for some GMs at low levels, though the same holds true for the original kingdoms; mentioning it for completion’s sake). 2nd level nets the skilled ability in Bluff and Disguise as well as sneak attack, which improves by +1d6 at 8th and 15th level, respectively. You also get no breath and +2 to saves vs. mind-affecting effects, paralysis, sleep and stun while in plant shape. 8th level yields DR/slashing equal to the savage spirit bonus and improves fly speed and maneuverability. It also yields class level resistance to cold, fire and electricity. 15th level upgrades cold resistance to cold immunity and further improves flight. It also nets you + sneak attack damage with grapples and targets thus damaged take 1d4 ability damage to an ability score of your choice. It also nets grab for the claws and provides quicker flight beyond the confines of the planet and solar system.

Now, the eagle-eyed reader may have noted that the bracketed ability score deviate from the base kingdom – that is intentional here. Only one subkingdom follows the noted key ability scores of the parent kingdom.

The second new subkingdom would be the beetle subkingdom (Strength, Constitution), which is obviously based on the insect kingdom. This one ranged in shapes from Small to Huge and yields a 30 ft. movement as well as 20 ft. fly speed with clumsy maneuverability. 2nd level nets +2 to natural AC, which improves by +1 at 8th and 15th level and explicitly stacks with shapeshifter class features. Additionally, we get the ability to execute an overrun sans AoO. 8th level yields trample and an improved fly speed and maneuverability. 15th level nets acid resistance 5 as well as a 8d6 30 ft.-cone of acid with a 1d4 cooldown and save governed by Con. Personally, I’d have preferred daily uses, but considering the level, it’s okay.

The third subkingdom presented would be the eel subkingdom (which is employing the ability paradigm of the parent fish kingdom). 8th level yields an extraordinary variant of shocking grasp with fixed damage and a chance to stun targets that fail their save for 1d4 rounds. 15th level nets the grab special attack as well as automatic bite damage when starting a round with a grappled foe. Additionally, you get a second set of jaws, allowing you to perform a secondary natural bite attack versus such a grappled foe, though at one size category smaller than usually.

Editing and formatting are very good on both a formal and rules-language level. Layout adheres to Everyman Gaming’s printer-friendly two-column standard. The piece of artwork in full color is neat. The pdf has no bookmarks, but needs none at this length.

Luis Loza’s new shapeshifter options are rather potent and make for strong choices as well as unique modifications for the shapeshifter fans out there. The concept of corruptions in this context could have carried a bit more, and I’m not 100% sold on the options alone being worth the price of the feat for admission. That being said, as a whole, I found myself liking this pdf. My final verdict will hence clock in at 4.5 stars, rounded up due to in dubio pro reo.

You can get these cool options for the shapeshifter-class here on OBS!

Missed one of the best takes on a compelling shpeshifter base-class? You can find Paranormal Adventures here on OBS!