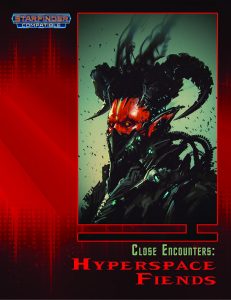 This supplement clocks in at 30 pages, 1 page front cover, 1 page editorial, 1 page ToC, 1 page SRD, 2 pages of advertisements, leaving us with 24 pages of content, so let’s take a look!

After a brief introduction, we’re introduced to the Fiendish Wastes – what’s that, you ask? Well, picture a section of hyperspace where planar boundaries collapsed, fusing a section of the abyss with hell. Yes, that means demons and devils in the same region. No, the results are not pretty. When attempting to cast a spell in the fiendish wastes, a character must succeed a Will save versus DC 18 or have the caster level reduced by 2. I *assume* to a minimum of 1, since no notes are provided for a caster level that sinks to 0 or below, though one could conceivably argue that spell failure would be a possibility. So yeah, this needs a bit of clarification. On a natural 1, the caster may also suffer from one of 7 nasty mishaps, which can result in confusion, fire damage to the caster, etc. The sequence is not 100% clear in all cases: “As soon as the spell is cast” could be read as when it is cast or after it is cast; the latter would make more sense. “Before the spell can be cast” is an example of a more precise wording here. Then again, I’m nitpicking here, since SFRPGs concentration-rules only fail your spellcasting on an attack that hits you or on a botched save – since the effects sport neither attack, nor save, they are functional. Two dangerous, poisonous gasses are provided as well, and the pdf mentions the boiling hot swamps, volcanoes and the passage f time in this hellish region.

Now, the majority of the book is devoted to something many a GM will rejoice to see: We have translations of classic demons and devils to Starfinder, all of whom receive their own full-color artworks. Now, these beings are not simply 1:1-copies of the classics, mind you – these fiends have been through hell (haha!), and now obviously seek to escape their hellish prison. 9 demons are included, covering babau, balor, dretch, glabrezu, hezrou, marilith, nalfeshnee, succubus and vrock. Babaus get tactical pikes, balors monowhips and dimensional slice as a sword weapon property…so there are some cool upgrades here. At the same time, I kinda face-planted, since it looks like a common glitch from PFRPG will continue to haunt me in SFRPG – there STILL IS NO SUCH THING AS UNHOLY DAMAGE. Now, as a whole, the pdf has done a pretty good job at getting rid of remnant Pathfinderisms, though e.g. the succubus’ profane gift erroneously refers to full-round action instead of full action. Cool: Mariliths can crush you into unconsciousness!

The pdf also includes 4 different devils, the hamatula, barbazu, osyluth and cornugon are provided. These are no less deadly, mind you, including 3/day swift action invisibility and e.g. white star plasma doshkos. Now, particularly cool would be that we actually get two new, fiendish ships . the abyssal readrazor, which clocks in at tier 10 and sports maw-like mass drivers, chain cannons, etc. The second ship would be the tier 6 hellish soulreaver, fitted with coilguns and heavy laser cannons. Now, it should be noted that these ships don’t have a hyperspace engine when encountered in the wastes; outside, they do. You see, a central plotline you can develop with the fiendish wastes, is that the fiends want to get out…and hence can really use the spare parts of your PC’s ship. Or, well, perhaps they are making a soul-powered hyperspace drive? In case you’re wondering encounter-level and power suggestions are provided for all level-ranges, and we also get an adventure hook for each level-region.

Editing and formatting are very good on a formal level. On a rules-language level, the majority of the book is very crisp and precise, with only few minor guffaws that don’t overly impede rules-integrity. Layout adheres to a rather beautiful two-column full-color standard and the pdf comes fully bookmarked for your convenience. The full-color artworks for demons and wastes and starships are copious and original – this is a beautiful book.

Michael Ritter’s supplement poses a simple question: Do you want your classic demons and devils? If the answer to that question was a resounding “yes”, then there will be no way past this supplement, simple as that. The Starfinder-conversions of the fiends have been undertaken with an eye towards being faithful, while also reflecting the new options and changed spell-engine of Starfinder. In short, this is a supplement well worth checking out, one that delivers exactly what it promises. Now, personally, I would have loved to see more ships, fiendish tech, etc., but it would not be fair to penalize the pdf for that. As a whole, I consider this supplement to be worth getting. My final verdict hence will clock in at 4.5 stars, rounded up due to in dubio pro reo.

You can get these classic demons and devils here on OBS!