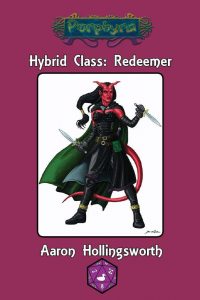 This hybrid class clocks in at 14 pages, 1 page front cover, 1 page editorial, 2 pages of SRD, leaving us with 10 pages. It should be noted that the pages are formatted for 6’’ by 9’’ size (or A5), thus allowing you to fit up to 4 pages on a given sheet of paper if your sight’s good enough. All righty, so what is the redeemer?

A redeemer is a pala/antipala and rogue hybrid, whose alignment must be within one step of the patron deity’s law/chaos or good/evil axis, The class gets d10 HD, full BAB-progression, good Fort- and Ref-saves, 6 + Int skills per level and proficiency with simple and martial weapons + hand crossbow and light armor as well as shields, excluding tower shields. They gain an alignment-based aura and at 5th level, the redeemer gets access to pala or antipala prepared spellcasting, governed by Wisdom, thankfully with the alignment-determinant caveat firmly in place..

While we’re talking of auras: At 4th level, the class gets a 10-ft. aura that enhances saves versus all alignment-based saves and effects. Starting at 5th level and 1 per level (not class level?) thereafter, the redeemer gets a magic item for cost from his benefactors – which can skew the WBL, so beware there. 9th level provides immunity to charm spells and SPs and +4 to saves versus them for allies within 10 ft., with 17th level providing the same for compulsions. At 15th level, the redeemer’s weapons are always treated as one of the 4 alignment-properties for overcoming DR. 7th level provides immunity to effects that would change the redeemer’s alignment.

Okay, so far, so good – let’s take a look at the unique class features, shall we?

The first of these would be hand of redemption, which is gained at 2nd level and can be used ½ level (class level?) + Wisdom modifier times per day. This can be considered to be a combo of the paladin’s lay on hands and the antipaladin’s touch of corruption, inflicting/healing 1d6 per two class levels, + Wisdom modifier (here, we have class levels). The redeemer gets to freely choose whether to inflict damage or heal and may employ negative and positive energy, which is very potent when used in conjunction with undead PCs. He also treats the ability as the antipaladin and paladin ability for the purpose of prerequisites and for qualifying for Extra Mercy/Cruelty.

Starting at 2nd level and every 2 levels thereafter, he gains a redeemer talent, which can provide channel energy (powered by two uses of the hand of redemption) at full level, though here, positive or negative energy must be chosen. Dodge (Yay?) and SP-based low-level divine magic can also be chosen alongside rogue talents and cruelties/mercies. 6th level also unlocks a talent to have two reckonings active at once.

Reckonings? Yep, that would be the second unique ability, and it’s available from the first level onwards. Reckonings last 1 minute per class level (which MUST be consecutive!) and may be started and dismissed as swift actions. We begin with 1/day reckoning and increase that daily number by +1/day at 4th level and every 3 levels thereafter. Reckoning comes in three options, in structure not wholly unlike judgments: 1) if the redeemer’s Wisdom score exceeds that of the target’s Dexterity, if the target doesn’t get Dex-mod to AC or when flanking the target, we get basically sneak attack bonus damage, with number of dice increasing by +1d6 at 5th level and every 5 levels thereafter. Additionally, the redeemer gets ½ class level to Sense Motive checks.

The second use of reckoning duplicates locate object, at 5th level alternatively locate creature. “Doing so extends the reckoning’s duration to 10 minutes per level.” Does that apply only to the locate creature use? Not sure. Additionally, the redeemer gets + Wisdom modifier to Steal attempts (bonus type not mentioned) and no longer provokes AoOs while attempting them. He also gets +1/2 class level to Sleight of Hand.

Thirdly, we have the option to add Wisdom modifier to initiative checks and Reflex saves as well as +1/2 class level to Perception to locate traps and Disable Device checks, the latter of which may be used to disarm magical traps. He also gains +1 dodge bonus to AC, which increases by +1 at 5th level and every 5 levels thereafter.

At 10th level, one reckoning must be chosen to improve: The improvements, in sequence, are: +1d6 precision damage for the pseudo-sneak; +2 to Sleight of Hand and Steal attempts; or +2 to Reflex saves. 11th level provides the means to expend two uses of reckoning to grant the ability to all allies within 10 ft. “the bonuses last for 1 minute” – as a free action. Okay, so does it have to be the same reckoning as the one of the redeemer, if any? Is it intentional that the redeemer is excluded from this use RAW? RAW, there is no limit on how many reckonings may be active at a given time. That being said, you can’t combo the ability with the double-reckoning-talent. Thankfully.

20th level turns one form of reckoning into a constant ability. Instead of classic archetypes, we do receive a variety of alternate reckonings, including their 10th level iterations. These include being able to freely use all weapons sans penalties while in reckoning and 1/round negating a single AoO (WTF!) as well as adding Wisdom modifier to secondary attack rolls when making full attack action. I assume that to pertain to the second of iterative attacks since 10th level provides that for tertiary attacks, but how does it interact with TWF? Flurries? No idea.

Okay, the second reckoning may be replaced with skill boosts when dealing with animals and magical beasts and a better CMD against them or better infiltration skills. The third reckoning can be replaced with a scaling save versus all spells and progressively better magic detection/perception-SPs while in the reckoning. Finally, we have better wilderness survival and Wisdom modifier to melee atk and damage versus plants and elementals.

The pdf comes with a massive array of FCOs for the core races and beyond, many of which add +3 rounds to one reckoning’s duration or 1/6 talent. The pdf comes with a bonus-file penned by Mark Gedak, which contains Esmeralda Alectis, who is a sample CR 8 tiefling redeemer.

Editing and formatting on a formal level are very good. On a rules-language level, the pdf is also sufficiently precise to be considered very good, if not perfect. Layout adheres to Purple Duck games’ 1-column standard, is printer-friendly with purple highlights being the only color. The pdf has no artworks apart from the cover, but comes fully bookmarked for your convenience.

The redeemer is not the first hybrid class by Aaron Hollingworth I’ve read, but honestly, I may have expected a bit too much here. The redemption-angle of the class exists in all but name; we have no notes on how e.g. antipalas could become redeemers or how paladins could become redeemers…but that is an issue of nomenclature. I did expect to see a sample code of conduct or two, though….but that falls behind my one central gripe with the class: You see, the redeemer is a very strong and nova-y option: The numerical double-attribute boosts are potent and with the very limited reckoning-uses, the class is predisposed to be rather bursty regarding power…but so, kinda, are antipala and paladin. However, these two do not have the massive skill array in addition to their other tricks.

The limited reckonings and their powers mean that, honestly, using the skill-based reckonings is almost always a bad idea, when the sheer power-upgrades draw from the same resource – making choice matter more would have helped there. The rogue-aspect is also very subdued, as far as I’m concerned and the lack of a fluffy niche for the class makes it pale for me.

And then there’s the big issue – I don’t think, just by describing the class in-game, it’d be able to distinguish it from pala or antipala. They have a flexibility-edge via energy availability, but they lack unique things to do beyond escalation of numbers. Comparably, they are frankly a bit too good for my tastes. Combined with the lack of a proper unique feeling and niche, that makes me shrug and move on; in comparison with the INSPIRED Vessel the author has penned, the redeemer is surprisingly bloodless and standard. I try hard to avoid writing “meh” in my reviews, but that is exactly, the perfect summary of how this made me feel – perhaps it’s me being jaded, but…I was kinda bored by this fellow.

I’m not a big fan of several design-decisions here and, worse, at least to me the class remained very pale; much more so than his Armjack and DEFINITELY more so than his excellent Luminary and Vessel, which I’d advise you to get instead – these two are pretty much worth getting ASAP.

Ultimately, my final verdict will clock in at 2.5 stars, though I will round up due to in dubio pro reo.

(Or you can get the Luminary here or the Vessel here!)