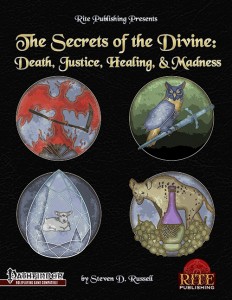 The latest installment of Rite Publishing’s books detailing the unique pantheon of Questhaven along the unique servants of the respective deities clocks in at 26 pages, 1 page front cover, 1 page editorial, 1 page SRD, 2 pages of advertisement, leaving us with 21 pages of content, so let’s take a look!

Now if you’re not familiar with the series, here’s the basic summary: The deities in Questhaven are peculiar in that their true names are not spoken – instead, they have aliases like “Our Shifting Oracle of Genius” or “Their Mistress of Madness,” with the precise epithet depending on your personal relationship with the deity. The deities sport favored weapons, domains and the like and concise write-ups and the pdf also offers unique options for the respective servants of the deity – often to the point, where the archetypes and feats provided radically change how a character serving the deity plays.

The first deity covered herein is, concept-wise, already very interesting: Our Mother of Many Ways is a chaotic neutral deity associated with jackals, badgers and the like – however, unlike most jackal-associated deities out there, she is not an evil creature – instead, the basic idea is to take the old adage of the thin line separating genius and insanity is represented and embodied by this deity. The vine of inspiration and its associated benefits, the manifestation of her favor and information on the holidays of the deity -all written in the compelling prose we’ve come to expect from the series. The deity also grants two subdomains for Knowledge, namely Prophecy and Inspiration, with domain powers allowing for insight bonuses to be granted to skill-checks or for or for relative flexible premonitions that allow you to act in surprise rounds or gain insight bonuses to AC/attacks, etc.

The deity also sports 3 new feats, one of which retaliates 1/day (not expended if the target saves) an attack on your person with a madness affliction (narrative gold!). Another allows for exactly one revelation with activation time of 1 full round or less to be used as a swift action – which can be pretty potent. Finally, feat number 3, is a high-concept one, allowing you to transform wine of significant quantities into ingested poison. While very circumstantial, I can see this being a cool plot-device indeed! (How did this one group take the fortress back from the ogres?) The write-up also contains, surprisingly, the Joyous Fellowship – a paladin archetype/orga that represents chaotic good followers that receive perceptive gaze (with a cut-copy-paste error referring to inquisitor levels), an aura of hope and, more interestingly, at 4th level an euphoria-powered barbarian rage in lieu of spells. The higher level auras are also rather distinct, allowing for the smite-powered extension of rage to allies, with chaos-based DR/lawful and apotheosis as well as banishment-powered smite. On a cool fluff-level, the archetype also features a fully depicted code of conduct – overall, a solid chaotic pala.

The second deity covered herein would be “Our Queen of Wisdom and Mercy”, the shepherdess of contrition and mercy – enormously popular due to healing offered free of charge, but unsurprisingly none too popular among the clergy-in-spe due to the exceedingly high moral standards required by the church. The write-up of the feats this time around contains two feats, one of which is exceedingly interesting: Sister’s Lace allows you, to, as a swift action, consume three uses of both healing and protection domain 1st level abilities to lace conjuration (healing) or harmless spells, either granting a significant long-term AC-buff that scales with your levels or charge a creature’s weapon with healing, which is discharged upon being touched by the weapon – which offers some surprising, tactical tricks I haven’t seen before.

The second feat, Healer’s Grace, allows for the expenditure of domain powers to grant rerolls versus negative conditions based on the cleric’s own Will-save – pretty powerful, but fitting one. We also get a new paladin, the Queen’ Man – at 4th level, they can significantly enhance the casting of spells and provide a defensive shield that wards against conditions you can negate via mercies and high-level paladins can convert damage in a huge radius into non-lethal damage can be considered truly cool – that battle waging on the grounds of a misunderstanding? Well, these guys can make sure no-one dies! (On a nitpicky side, the archetype is once erroneously called “compassionate son” – but that’s pretty much a cosmetic gripe.) The capstone similarly emphasizes taking conditions, damage, etc. of others, making the archetype’s final levels predisposed to notions of heroic sacrifice, something I really like in the frame of paladins and, since this replaces spells, the power of the class feature seems justified. Furthermore, the archetype sports a number of unique and complex modifications of divine bond with a specific ward-creature that makes the Queen’s Man a superb bodyguard for the target creature. We also receive a second archetype, the Harmonious Spirit warpriest, who receives a modified list of skills and proficiencies as well as several monk-related abilities. Automatic merciful spells, merciful extraplanar prisons to deal with vanquished foes and the like render this archetype rather cool for groups like mine, where murder-hobo-ing intelligent life is NOT considered behavior that’s acceptable for good characters. The harmonious spirit also receives a code of conduct, while aforementioned paladin does not.

The third deity herein was one I’ve been pretty much excited about for a long time – the Reaper of Death and Rebirth, served by the Crematorium of the Grim Gatherer – and yes, this is an interesting component of the church: Beyond the usual death-related iconography and different takes on the religion, the addition of phoenix and rebirth as central concepts render this one a surprisingly fresh take on the death-god-trope. The archetype provided here would be the Ruiner fighter, who gets a specific ruin pool equal to 1/2 class level + Cha-mod, which can be used defensively, to make wounds that are hard to heal or cast curse spells – though I’m honestly hard-pressed to note a sufficient amount of spells with the cures-descriptor – a spell-list,. even a small one, would have been very much appreciated here. Additionally, higher level ruiners receive hexes, bonus damage versus cursed foes and the stalwart ability (not a fan – basically, evasion for Fort- and Will-saves) and high-level ruiners can prevent the very first attack in a full attack executed against them by cursed targets. Overall, a cool, if somewhat user-unfriendly archetype.

Now on the interesting side, there is also a universal archetype contained herein, the Phoenix Child…which is less of an archetype and more of a GM-based template that is applied to characters. Think of it as a kind of mythic path sans tiers that is instead tied with linear progression to the respective class levels. You see, these beings may be reborn in fire, but they also return from the grave with a list tattooed into their arms – this is the list of specific tasks the character has to rectify in order to be absolved of the sins committed in a previous life, with final death being the reward…though redemption thus gained is scarcely attained. Beyond various flame-themed abilities, this one is basically a power-increase, a narrative option…and made me immediately contemplate a campaign, where all PCs are Phoenix Children. Not suitable for every campaign and GMs should be aware of the additional power, but still, I consider this AWESOME.

The final deity herein would be Our Steely-Eyed Judge, the deity of justice and law – stern, fierce and vigilant, supported by a rather well-written Truth inquisition that includes a honesty-enforcing curse, with the two feats once again sporting a domain-powered lacing effect, which, this time around, offers for a kind of flanking curse and a limited retributive bestow curse (lacking italicization), which is nice. The write-up also sports the Thief-taker Slayer archetype, a specialist of urban tracking (with handy DCs/modifier-tables provided), including the rather cool generation of tracer-objects and high-level quarries and a talent that allows for the garroting of enemies and a non-lethal incapacitation talent that erroneously mentions the bounty hunter in another minor hiccup.

Beyond these option, we conclude this book with some truly intriguing pieces of fluff that elaborate the themes and concepts of Questhaven, including the crossroads of dream and some important pieces of advice some authors out there should take a look at – making fluff not read like a DVR instruction manual is something that would make my reviewer’s obligations significantly more compelling…but I digress.

Editing and formatting are the one component of this supplement that could have used some streamlining – there are quite a few punctuation glitches in here and references to the wrong class in some abilities, remnants of either cut-copy-paste glitches or revisions in the class-name’s respective nomenclature. Layout adheres to Rite Publishing’s two-column full-color standard and the pdf has nice artworks for the deity’s symbols and more, most of it in full color. The pdf comes fully bookmarked for your convenience.

Okay, so this one is pretty hard on me – I like just about all of the respective options portrayed herein, though the ruiner could really have used a list of curse spells by level. I also would have loved a code of conduct for the Queen’s Man. Then again, the significant majority of archetypes and options here not only sport some awesome concepts, they also manage to use rather innovative mechanics and inspire to an extent that makes me come up with plot-lines by virtue of simply reading them – a feat not many pieces of crunch achieve. So yes, Steven D. Russell’s latest collection of deities and related material must be considered to be inspired, though it also feels a bit rougher on the edges than what I would have liked it to be. Still, most glitches herein are ultimately cosmetic in nature – which makes me settle on a final verdict of 4.5 stars, rounded up due to the inspired ideas herein to 5 for the purpose of this platform.

You can get this high-concept book here on OBS and here on d20pfsrd.com’s shop!