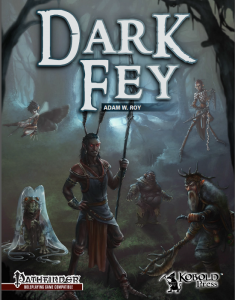 The first creature herein would be the CR 6 Aridni, essentially tainted pixie hunters that can shoot arrows that can cause hideous laughter, confusion and similar effects, making them well-suited to their task. Beli on the other hand are the ice-arrows firing servants of the arctic god Boreas, whereas Bereginyas at CR 4 are semi-gaseous and, though tiny, they get a racial bonus to CMB and CMD that not only offsets their size penalty and makes them rather adept at their task – these fey actually try to smother you. Ouch. Boloti are frog-headed humanoids clad in jelly-fish like mantles of water that can cause vortexes and even cause water to sprout grappling tentacles. this is the first fey herein I’d consider truly awesome and original – semi-gaseous smothering fey are neat, the Boloti are downright awesome!

Bucca are tiny, poison-using bat-like fey that are vulnerable to sunlight and known for their poison-use. At CR 2 okay, if not particularly awe-inspiring. Chernomoi at CR 1 are essentially the draconic equivalent of brownies. The CR 4 Clurichaun wields antler-glaives that can extend or shrink and disarm or trip adversaries; Combined with their array of SLAs, they make for nice hunter-style adversaries/ hit-and-run foes. Dark Satyrs at CR 6 are…different – with insectile antennae, sleep poison and twisted effects via their piping, these satyr tainted by the Great Old Ones make for one damn cool adversary, both with their signature abilities and SLAs.

Domovoi are fighting fey, house spirits turned enforcers and guards at CR 6, while at CR 6 the Dorreqi, balls of twisted tentacles, are the Walker’s tainted version of the Korred. The CR 1 Fey Water Strider are water-walking docile insect-mounts – now this one, I really love! An amalgam of dead fish and amphibians, Mamura at CR 5 are aberrations with the (fey) subtype – which does not exist per se. The description is completely awesome and terrifying, though and their reality-bending and concentration-hampering makes them useful and surely an adversary your PCs will not forget.

The CR 11 Mavka are undead (again, with the non-existent fey-subtype) dryads, tainted into servitude by vampires, bound to cauchemar nightmares and now vulnerable to sunlight: Once again, excellent prose makes one want to sue this creature! The CR 12 Naina are drake fey with various breath attacks, spells and SLAs as well as shape-changing, make for an adversary that may, thanks to the array of abilities, prove to high-level parties as confusing as faerie dragons to lower level PCs.

The CR 11 Nichny resemble humanoid black cats and are actually great soothsayers that may, contrary to appearances, imbue other with luck. This one features a concept with a nice twist and feels rather innovative, so yeah: Neat. Why? Because their xenophobic and gleefully carnivorous… approach at your own peril…

Qwyllions at CR 8 are bloated, hideous mutations of nymphs, again spawned from the corruption of the Walkers – and they actually get an array of fun abilities as well as a weakness and a heritage feat that marks a character as a former thrall to these disgusting parodies of what once was good and pure. Scheznyki, CR 9 fey resembling essentially disheveled dwarven bums, can be rid of some of their abilities by stealing their hats or cut their beards – which is just awesome and cool! This type of information drives home how alien fey truly are and resonate well with me. And yes, we get full item-stats for the hats.

The final fey herein would be the CR 1 Zubnaya, clad in armors of teeth and fighting with tooth-riddled spiked chains, they make for a very disturbing take on the tooth faerie.

The pdf also provides the CR +1 fey animal template as well as a list of known Fey of Midgard by Type and one by CR, all featuring the respective source-books in brackets – handy to have.

Editing and formatting are very good, though not perfect – still no true reasons to complain. Layout adheres to Midgard’s drop-dead gorgeous full-color 2-column standard and the pdf comes fully bookmarked for your convenience. The artworks used herein are insane – beautiful, of top-notch quality and just beauties to behold, one and all of them – they universally made me want to include their depicted creatures in my game.

Adam Roy provides us with a cool mini-bestiary that admittedly has a hard standing with me – both Legendary Games and Alluria Publishing have upped the ante so high regarding monster books that it’s hard to excite me anymore and at first, I confess to not being overwhelmed. But slowly, though distinctly so, Adam Roy seems to have found his stride – the more I read, the more imaginative and unique the creatures got – to the point where there are some serious strokes of genius herein. Now on the downside, aforementioned awesome artworks are not provided for each creature, nor do we get lore-DC-section of fey-like tricks like the ones mentioned before for every adversary herein. What we do get, though, would be very compelling prose that drives home the weirdness of many of the creatures herein. Also, I’m a sucker for fey and mythos combining into something…different and twisted. Oh, and then there’s the VERY low price-point – for the artwork, for the quality of the content, the price-point of this mini-bestiary is more than appropriate and indeed a steal. It is also the deciding factor that made me round up from my final verdict of 4.5 stars to 5 – while not all creatures herein are killer, there is some awesomeness to be discovered in this pdf – if you dare to look, that is.

Youc an get this cool mini-bestiary here on OBS and here on d20pfsrd.com’s shop!