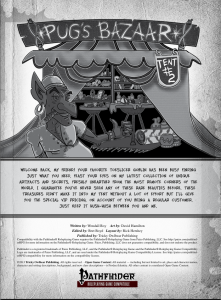 Written in-character like the sales pitches of Pug, we are introduced to a variety of curiosities and oddities in this supplement, first of which would be hexeater voodoo dolls – these essentially work as buffers for curse-spells and hexes, with each prevented one draining chrages from the doll. As a nice idea, each item herein comes with adventure hooks, the Hexeater’s one dealing with the potential that these dolls that emit shrieks upon expending their final charge, may actually be linked to orphans…haunted orphanages…perhaps using lifeforce to fuel their protective properties? Disturbing!

Desert-dwelling characters may be interested in the Sacrabshell Breastplate, which is actually a +2 shadow agile breatplate that protects the wearer from heat dangers and damage incurred by sandstorms, even allowing the wearer to burrow at 10 ft through sand – cool armor!

Blasting bubbles are actually a new battlefield control spell that allows Magi and Wiz/Sorcs to place bubbles around the battlefield – these not only block squares (but not line of sight/effect), you may cause them to emit damaging pulses as standard actions – oh, and trying to destroy them results in unfortunate explosions – which may result in rather deadly chain reactions that may be a bit much damage-wise for the level. Still, since the explosions cannot be triggered by the caster without attacking the bubbles, I consider the spell interesting enough to consider it cool and working – oh, and the hook has a wizard trying to make the PCs destroy their copy of the spell, claiming copyright infringement. XD

Now if you like those blackpowder weapons, do you know about the new Dragonfury Cartridges? No misfire, no attack-roll, 30 foot fire cone, 7d6 damage, ref 16 for half damage. Oh, and there are ones for other damage types as well. Powerful, but also rather cool and limited enough.

I love battlefield control and Banerock Caltrops – these caltrops are not only more efficient than regular ones – they actually move towards a creature type specified and deal even more damage to said targets NASTY and cool!

We get another spell that deserves the moniker “nasty” with the level 7 sor/wiz-spell Portal Guillotine – warding a portal, door or similar gate, the spell deals force damage to those trying to pass it, potentially decapitating foes! My only gripe here is the lack of mundane means of disarming the ward.

Marionette Meathook Gloves act as +1 cesti and may be quite nice – where they start becoming sheer awesomeness is when the wearer is swallowed whole  -DR 25/-, acid resistance 20 and apart from the usual way to lsoe the grapple condition, as a standard action, the wearer can attempt to hichjack the mind of the creature that swallowed him/her – will save or dominated… OUCH. Purple Worm tank/Dune, anyone?

The final new spell herein is Bloodfrost, for Druid 2, Sorc/Wiz 3, Summoner and Witch 4 – this spell deals cold damage, more so if the target suffers from bleeding wounds. Solid, but compared to the other pieces of content herein, rather common.

The Amplifying Wand Widget can be applied to wands to burn more charges, but apply specific metamagic effects to the wand’s effects – at the cost of a 10% misfire chance on every use. Nice!

The final item would actually 3 i one – Gerzar’s Amazing Unguents: Crimson Clay may be shaped in either a doll that can do easy tasks for you or into a protection from evil-effect or it may be ignited for small bursts via fire or electricity damage. Green Gel nets natural armor bonus, but decreases starting attitudes due to smell, can be stretched into a bubble that allows temporary breathing under water or be formed into bullets/sling-stones that deal non-lethal damage. Awesome! Finally, Purple Putty can be used for +10 to disguise (but does not affect clothes and must be of the same creature type and only allows for 1 inch height-difference), allow the user to walk over liquid or copy a page of nonmagical writing by pressing it on the page – I LOVE these! Kudos for all of them!

Editing and formatting are top-notch, I didn’t notice any glitches. Layout adheres to an easy-to-read, nice and printer-friendly 2-column b/w-standard. The pdf has no bookmarks, which is a minor bummer, but still okay at this length – though only barely so. The pdf offers awesome little b/w-artworks for each and every item herein, amazing at this fair price-point.

Author Wendall Roy has created a selection of items that is almost exclusively killer, bereft of components I’d consider broken and full of cool ideas, with aptly-written prose adding fun to the reading experience of cool items – add to that the top-notch production values Tricky Owlbear Publishing has provided here and we get one stellar supplement indeed – apart from the lack of bookmarks, I’ve got nothing to complain and honestly, I can’t justify rating this down for such a paltry oversight – it’s just too much fun! Final verdict? 5 stars + seal of approval!

You can get this awesome selection of items here on OBS and here on d20pfsrd.com’s shop!