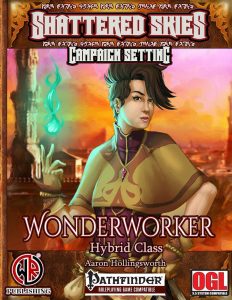 This hybrid class clocks in at 14 pages, 1 page front cover, 1 page editorial/ToC, 2 pages of SRD, 1 page back cover, leaving us with 9 pages of content, so let’s take a look!

This review was added to and moved up in my reviewing queue at the request of one of my patreons.

The wonderworker is a hybrid of two of the most powerful classes available, namely wizard and druid. Chassis-wise, it receives d6 HD, 2 + Int skills per level, proficiency with club, dagger, sling and quarterstaff, but not any armor. Her somatic component sporting spells are subject to arcane spell failure chance when wielding shields or wearing armor. The class gets ½ BAB-progression as well as good Will-save progression.

The class begins with Craft Wondrous Item as a bonus feat at first level. Spellcasting-wise, the wonderworker draws spells from the sorcerer/wizard-list, adding the druid spell-list. Druid spells thus converted are treated as arcane spells. Spells need to be prepared ahead of time and the governing spellcasting attribute of the class would be Intelligence. Spells are not prepared in a spellbook, but instead are stored in the wonderworker’s imagination. They begin play with all 0-level wonderworker spells + 3 1st-level spells, +Int-modifier 1st level spells. Upon gaining a new level, the wonderworker gains 2 new spells known of a spell level the wonderworker has access to. The wonderworker caps at 4 slots per spell level and is a full caster, gaining spells of up to 9th level.

Tying into this would be the 1st level wonderful bond, which may take one of two forms: The first is a bonded item, which grants access to Air, Animal, Earth, Fire, Plant or Water as a cleric domain. “Wonderworkers also have access to a set of Animal and Terrain domains.” – no idea what that sentence is supposed to mean. For the determining of the cleric level for these, class level is used. Wonderwrokers choosing this option gain bonus spells from the domain via the domain spell slot. The object does not cost anything and is masterwork. As always, casting without such an item requires a hefty concentration check. At higher levels, material and magic item abilities/properties may be added. The second option available would be a bond with a magical animal companion – this companion is incompatible, thankfully, with eidolons, etc.

This companion’s growth begins at BAB +1 and increase this to BAB +14. Save-wise, we oddly begin with +3 for Fort and Ref-saves, but scale up to what amounts to a ½ progression. The companion starts with 2 skill ranks and increases that to 16. Up to 8 feats are gained. At 3rd level, the companion gains +2 natural armor, increasing yb a further +2 at 6th level and every 3 levels thereafter. In this interval, the companion also gains +1 Str/Dex bonus, culminating at +6 at 18th level. The companion gains 1 bonus trick and increases that to up to 7. 4th level and every 4 levels thereafter yield ability score increases. The companion begins play with link and sports d10 HD, gaining up to 14 HD over the 20 levels of progression. The companion also gets SPs: At 1st level, a 0-level at-will SP; 3rd, 9th and 15th level yield an SP of choice from the wonderworker’s spell-list, usable 3/day, which may be of a spell level that can’t exceed ½ the companion’s HD. There’s a formatting glitch in the DC of these: “10 + ½ the creature’s hd + Con bonus” – spot the formatting deviation. Starting at 6th level, the natural attacks of the companion are treated as magic.

The beasts available would be: Ankheg, basilisk, bulette, chimera, cockatrice, girallon, griffon, kraken, manticore, owlbear, rust monster, sea serpent, stirge, unicorn and warg. Advancements are gained at either 4th or 7th level. The respective beasts have pretty different power-levels – a bit more careful balancing between the options would have been nice. It should also be noted that these options provide pretty potent assisted flight at 1st level – depending on the type of campaign you run, this can be problematic. Speaking of which: The wonderworker does, RAW, not get Handle Animal as a class skill, which is certainly weird, considering that the magical creature needs to use tricks. It should also be noted that these monsters don’t get their iconic tricks – you have a basilisk, but no petrifying gaze. You have a chimera, but no breath weapon. I get the balancing intention here, but yeah.

1st level, 2nd level and every even level thereafter yield one example of the signature ability of the class – a wonderwork. The first of these is a hybrid spell. The composite spells must be of the same school and the highest level of the constituent spells determines the spell level of the wonderwork. The longest casting time is inherited, as is the shortest range. You may, however, choose which target the wonderwork will inherit from the parent spells. The hybrid spell inherits the shortest duration. While the wording here is a bit wonky, wonderwork spells have a save t negate – you inherit one from the parent spells. If SR applies to one of the parent spells, the wonderwork is also susceptible to SR. A target hit by such a hybrid spell is subjected to the combined effects of both spells, though magical increases to ability scores do not stack. One sample combo-spell is provided (missing several italicizations and sporting heritage references to parent spells). Wonderwork hybrid spells may only be cast 1/day, but otherwise behaves like a spell.

The second form of wonderwork…seems to have been cut. That’s it. Weird.

The class comes with an archetype for the class, the meddlesome magician, who gains Bluff, Diplomacy, Intimidate, Sense Motive and Sleight of Hand as class skills. The archetype gains 6 bonus skill points at 1st, 4th level and every 4 levels thereafter. When a target of a meddlesome mage’s spells is threatened by an ally, the target tales a -1 penalty to the save against the spell, which increases by -1 at 5th level and every 5 levels thereafter. Flanking by allies increases the penalty by a further -1. This replaces wonderful bond.

Editing and formatting aren’t perfect, but better than in most Wayward Rogues Publishing classes – the class is functional and works as depicted. Not perfectly, but yeah. Layout adheres to a nice two-column full-color standard with neat full-color artworks. The pdf comes with basic bookmarks. It is a bit unfortunate that you can’t highlight text or copy from the pdf – a comfort detriment.

Aaron Hollingsworth’s wonderworker is an interesting class: The class attempts to balance the superior spells with a weak chassis (the class does lack a crucial class skill) and a companion that is deliberately weaker than it could easily be.

Now, personally, I think that this class can be interesting, particularly for high-fantasy/high-powered campaigns that don’t mind the access to pretty good flight at low levels. At the same time, the wonderworker is a VERY strong option, in spite of the serious spells known restrictions. The hybrid spells are a WIDE OPEN concept that obviously, system-immanently, requires some GM oversight. That being said, the concept is presented in a relatively concise and succinct manner – probably as close to how you can depict the ambitious concept as possible. The magical beast companion tries to make up for the limitations on spells known, but to me, it seems like one hybrid spell class and one that focuses on going all out with the companion, would have probably been more rewarding.

That being said, I can see the class work well in some campaigns. If you’re running a higher powered high fantasy campaign, then this fellow may deliver if you’re willing to overlook some minor power-discrepancies between the companions and provide some GM guidance in hybrid spell creation. The editing glitches and inability to parse text from the pdf makes it more inconvenient to use than it should be. These are slight detriments and as such, we have, as a whole, a mixed bag here. A relatively solid, if slightly problematic class offering; slightly, but not significantly, on the positive side as far as mixed bags are concerned. Hence, I will rate this 3 stars.