The Terrible Revenge of Simpering Malexineuss the Pretender (OSR)

The Terrible Revenge of Simpering Malexineuss the Pretender (OSR) 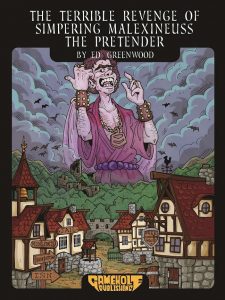 This module clocks in at 22 pages, 1 page front cover, 1 page editorial, 1 page back cover, leaving us with 19 pages of content, so let’s take a look!

All right, as this is an adventure review, the following contains SPOILERS. Potential players should jump to the conclusion.

All right, only GMs around? Great! The town of Middlesmith was once renowned far and wide for its smithies, though nowadays, the crossroads tavern of this waystop constitutes perhaps the most remarkable place. This place for the weary traveler is run by the wizard Ironkainen, whose private abode can be found in the tavern’s extradimensional attic. More than one trespasser was found horribly mauled, ostensibly by the dread Gameleon, which guards the private place – as such, that particular place became known as the “Gamehole.” All could have been nice, but a particularly unpleasant wizard named Simpurarrynkh Ahsarexnu came to town – the arrogant fop wants to build his estate here and has, with as much charm as you’d expect, failed to win over anyone. Yep, that would be the simpering Malexineuss referenced in the title.

Now, villagers have begun becoming sick…not with cough…but with THE SICKENING! *D’unh-D’unh-D’UNH* He was last heard whispering threats and has vanished. Enter the PCs, who will find no monster in the gamehole, but rather adventure: They will get to pick from a couple of minor magical items – once the PCs have taken an item, they will sit at a table…and in a blinding flash of light, begin adventuring, as a meta-inception of sorts – the table manifests in the middle of a forest – time to explore!

In case you’ve been wondering – the tongue-in-cheek tone and flavor does show that this was probably written as a convention module for Gamehole Con, though the insider jokes are kept to a level where they don’t impede the atmosphere. Still, if the title did not provide ample clues for you, this is not a particularly mega-serious module.

The fully mapped (in color) forest comes with a couple of en route encounters with classical threats, but ultimately, the PCs will find the eponymous’ wizard’s abode: A little, pretty simple puzzle that is based on trial an error can be found – the PCs will need to activate plates in sequence, though ultimately, only one of the plates is relevant; that being said, failure may put the PCs in conflict with a rather deadly creature. Within the tower, the PCs may meet a deathdealer – a hemispherical rock, from which deadly, organic, eye-studded spikes jut forth below; a strange and fully depicted critter here. Speaking of deadly – yep, there is a room, where the ceiling is a gelatinous cube. A strange magical/monstrous effect can be found. The PCs may encounter one Tlaggar, deadly magic-user; minor note: The spell references throughout the module have not been italicized, which, depending on your OSR-system of choice, may be slightly jarring. The cellar hold a really deadly encounter and the way up to Malexineuss’ chambers is guarded by another lethal and uncommon monster.

The path up is btw. studded with magical notes proclaiming doom for the foes of Malexineuss…and frankly, while the wizard may be a hedonist, disgusting, a coward, toady and an all-around despicable being, he is NOT a pushover; his tactics, like those of Tlaggar before him, are provided in a rather interesting detail; should the PCs prevail in spite of his tactics and defenses, he’ll grovel and beg…and yes, he is responsible for the Sickening…and gloats, in the tradition of unlikable a-hole villains, on how it can be treated, thus ending the module.

Editing and formatting are very good. Layout adheres to a nice two-column b/w-standard with nice original b/w-artworks inside. Cartography is excellent and in full-color, though no player-friendly, key-less versions are provided. The pdf does not sport bookmarks, which constitutes a minor comfort detriment.

Ed Greenwood is a legend, and there is a reason for that. The module sports his trademarks; it is streamlined, well-written, and really challenging. Malexineuss is a villain the players will truly hate: Petty, vindictive and thoroughly disgusting. Now, the module’s convention-game/one-shot focus is pretty evident in the winking inside-jokes and the overall set-up. If you’re looking for a serious, epic storyline, then this may be not for you. If you’re looking for a fun, linear crawl that will challenge the PCs, then this should do it. Plus: How often can you get an Ed Greenwood adventure for PWYW? Exactly.

This is worth reading, and while I’d usually settle on a 4-star verdict, the PWYW-status adds +0.5 stars and I have an in dubio pro reo policy, which means that my official verdict will round up.

You can check out this funny little module for PWYW here on OBS!