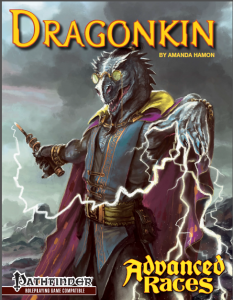 The Dragonkin are a relatively young race and their mindset as well as the rigid caste structure of the militaristic Mharoti empire are explained in detail, with the roles of dragonkin both within and beyond the borders of the empire being highlighted as means for players to get some inspiration for their PC’s origin. Crunch-wise, dragonkin get +2 Str and Cha, -2 Dex, are slow and have their speed not modified by encumbrance or armor, choose one energy type and gain “DR 2 against that energy type”. The thing is – it’s not DR. It’s supposed to be “resistance 2” – DR always requires a / – and yes, this error is repeated throughout the pdf. Yes, a nitpicky gripe, but one that irks me. Dragonkin get +1 natural armor, +2 intimidate and diplomacy and treat fly as a class skill. There also are 8 alternate racial traits to choose from – 4 of which represent the dragonkin’s draconic bloodline, in this case a concept that aligns them with flame, stone, storms or waves for dancing lights, virtue, spark and create water as at-will spell-like abilities that replace armor. Alternatively, upgrading RESISTANCE to 4 at the cost of armor is possible, as is being able to speak with animals with reptilians. The attribute modifiers can also be changed to +3 Str and -2 Dex; Not a fan of odd attribute-bonuses – they are not standard for Pathfinder design and there’s a reason for this – it promotes min-maxing. Energy resistance (here properly called…) can also be replaced with a +3 bonus to mind-influencing effects…which is rather strong for my tastes. However, we now get the age, height and weight-table, which had been absent from a prior incarnation of the book.

There also are 7 new feats…and they are WEIRD. +1 to “natural armor rating”, which is the wrong wording, is just one example. What about a feat that nets you either Darakhul, Kobold or Minotaur as a language? Yeah. Wait, what? You know how language acquisition is done in Pathfinder, do you? Hint: NOT via a feat. One feat for a language? Come again? High-level dragonkin and kobolds can add +2 “natural armor rating” and “DR 3 to one energy type”. Beyond the faulty rules-language…why take the feat that nets +1 natural AC (pardon, “armor rating” as the pdf calls it) again? +2 to Fly and improved maneuverability may be nice…but there’s no such thing as “maneuverability rank” – its either “maneuverability” or “maneuverability rating”. The word “Rank” is reserved for e.g. skills. +10 to intimidate versus the lower castes of the empire on the other hand is a neat idea. A spiked tail for a d4+3 damage may seem like a good idea…the thing is…why +3? Natural attacks usually are only the basic damage. Also, the feat does not specify whether it’s a primary or secondary natural attack. Alternatively, you may take the Sturdy Tail-feat, which nets you +3 to CMD-checks vs. bull rush, overrun and trip. You may take this feat 3 times, but the feat’s text omits that the effects stack – perhaps due to not specifying the bonus-type, though racial is probably the correct one. The interesting thing here is that some of the feats are from the “Player’s Guide to the Dragon Empire” – though e.g. the feat that nets you a fly-speed is missing – oh, and the feats chosen are not necessarily the well-designed ones, but rather ones with aforementioned DR-glitch..

Next up are 5 archetypes – the Edjet Warrior is duplicated from the “Midgard Player’s Guide to the Dragon Empire” and is still a good archetype. Wizards may opt for the Dragonkin Elementalist, who may later change incoming elemental attacks on the fly, which is cool. The problem is – the affected targets are the elementalist and his companions – sans range. A range or at least line of sight/effect-caveat would be in order. Oh, and a massive hit with the nerf-bat: The basic ability of the archetype allows for the casting of elemental spells of the chosen element even when neither having the spell prepared, nor in the spellbook. Looking at the amount of spells out there, this ability begs to be abused – at least a caveat à la “must have identified the spell via spellcraft before” would be in order. The capstone wreathes the elementalist in an elemental aura whenever casting a spell of his/her chosen element, but the ability suffers from a minor case of ambiguity – “primal bond energy descriptor” could be misread, though closer scrutiny reveals the intended purpose.

The Rubeshi Slaver barbarian archetype “cannot be aligned with good or law” alignment-wise, which is not only partially redundant, but also, again, a case of flawed wording. “Bloodied Rage” reeks of badly converted 4th edition mechanics – “+1 to fortitude saves made to negate or reduce damage” makes not that much sense – do poisons and diseases count? When dropping below half hp, the slaver gets 5 non-scaling hp – non-scaling and not very strong and utilizes a clunky concept. The capstone is ridiculous – wielding a spiked chain as a +1 wounding longsword – including downgraded damage? Oh yeah. Impressive at level 20, where can I subscribe? I’m not going into how the wording doesn’t work, but the ability presumes that spiked chains can be wielded with one hand – which is not (automatically) possible. They’re two-handed exotic weapons.

Clerics may opt for the Worldserpent’s Chosen-archetype – which sounds awesome. These chosen must make DC 5+ spell level concentration checks to cast any spell with a verbal component – nice idea, but won’t be fun at the table – spellcasting will take even more time and rolling.

As a bonus, the archetype nets this ability:

“With her mere presence, a World- Serpent’s chosen reminds good, evil, chaotic, or lawful creatures that life is short and that the afterlife is uncertain. Against all foes with a true-neutral alignment, a World-Serpent’s chosen has a fearful aura (10 foot radius). This aura functions as a fear spell, except any affected creatures become shaken if they fail the Will save (DC 14 + the World-Serpent’s chosen’s Wisdom modifier). This ability has no effect on creatures that are true neutral. This ability replaces aura.” Emphasis added by me. Notice a glitch? Also: Fixed DCs? LAME. Their channel energy is replaced with either the ability to penalize foes within 30 ft. scaling penalties and getting spontaneous inflict spells or generating a boon of the same amount and spontaneously cast healing spells. The ability fails to specify whether its (Ex) or (Su) and allows no save for the bane, which is not standard design.

Sorcerors may opt for the Cloudtop-bloodline…and the bloodline gets a damn cool ability – the elemental shield they can conjure actually is rather complex and works well in absorbing incoming elemental damage. The second focus beyond this barrier is a resistance to mind-influencing effects and scrying – even if the scrying-spell offers no save, they can save against it at DC 15+spell-level – why not simply as per the usual formula of 10 + spell level + caster’s attribute modifier? Apart from that, I did like this archetype.

We also get 3 new spells – one to conjure a geyser of fire that targets reptilians and deals fire damage to them. As a secondary effect, it temporarily blinds those affected, though the spell fails to specify whether the blindness is only for reptilians or for all creatures in range. Anyways, rather strong for 2nd level. We also get a level 9 counter-scrying spell and a spell that nets a creature immunity to an element – not a fan of that, since energy immunity and similar spells have established another tradition, i.e. not simply netting flat-out immunities. On the SRD-page, we get the dragonkin-exclusive lunging-weapon quality and the four-element-resisting enchantment for armors – the latter at a whopping + 42K base price.

Editing and formatting on the formal level are not bad – the same can’t be said about the rules-language. Layout adheres to Kobold Press’ two-column full color standard and the full color artworks are awesome. The pdf comes fully bookmarked for your convenience.

Oh boy. I like nitpicking improper rules language because they result in confusion at the table, but I also let minor issues stand if they don’t pose a major trend. My first nitpicks in this pdf were just that – nitpicks. And nonstandard attribute modifiers are a red flag for me, but oh well – still not too serious. And then the feats and archetypes come and all comes apart. If above was not ample clue – this pdf needs another THOROUGH rules-language editing. In fact, it needs a complete rewrite.

Beyond minor and major uses of flawed rules-grammar and syntax, balance is all over the place and ranges from ok to ridiculous. The one archetype I have nothing to complain about is a reprint from the “Player’s Guide to the Dragon Empire“. Which brings me to another issue – some of the most iconic options from latter book are simply missing here, in a book that is supposed to collate the Dragonkin’s options. Either collect all the material or a best-of/essentials-type book (like the gearforged) or provide exclusively new material. Then again, looking at the new material…not sure whether that would have helped. And yes, I’m aware that I’m probably coming off as a harsh bastard here, but between 4th edition-relics, wrong rules-language and the amount of issues herein, I can only sincerely hope that designer Amanda Hamon consults the rules and properly revisits the rules-language of PFRPG and then fixes this mess.

This pdf is not in any way up to Kobold Press’ usually high quality standard. In fact, the ridiculously low amount of content without one problem or another would have made me settle for a final verdict of 1 star, were it not for the final archetype and the well-written, if partially duplicated fluff and content from the Player’s Guide/Campaign Setting. Still, I can’t recommend this pdf in any way as it stands – fans of the Dragonkin should get the vastly superior Player’s Guide instead. My final verdict will clock in at 1.5 stars and try as I might, I can’t bring myself to round up since throughout the lecture of this pdf, I felt as if I was doing the job of an unpaid rules developer – hence, rounded down to 1 for the purpose of this platform.