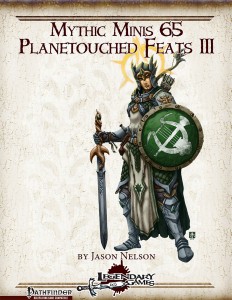 -Angel Wings: Your wings radiate light and you increase you fly speed by +10 ft. per 3 tiers. Spend one mythic power to increase maneuverability to good for mythic tier minutes.

-Angelic Blood: save-bonus vs. evil increases to +4; said bonus also applies to check to remove/dispel such effects. When an undead or creature with the evil subtype deals bleed or blood drain to you, you may as an immediate action attack the target with a touch attack, your blood acting as holy water.

-Celestial Servant: Companion, mount, etc. treats natural weapons as good and does not apply its SR versus your own tricks, but increases it by 1/2 tier versus evil descriptor spells7effects or those originating from fiends, half-fiends, etc. Aligned attacks are very strong, so not sold on this per se.

-Channel Force: +2 to CMB made to push/pull; expend mythic power to increase the distance by 5 ft. per 1d6 of the channel; also still move the target on a made save. I LOVE this one -cool rules-tie-ins and interesting options!

-Improved Channel Force: Further +2 and use mythic power to increase DC and length of the effect generated, with different shapes for lines and cones.

-Greater Channel Force: Further +2 to CMB and choose which targets to push and which to pull; also adds stagger effect for mythic power or modify your burst’s size. Interesting!

-Heavenly Radiance: Use mythic power to use the mythic or augmented versions of aasimar racial spell abilities.

-Metallic Wings: Deal damage as a creature of +1 size with your wings and treat them as either cold iron or silver. Spend 1 mythic power to use them as primary natural weapons. Cool!

Jeff Lee and Jonathan H. Keith deliver an intriguing array of aasimar-themed mythic feats for the champions of the heavens, with concepts herein being on the high-end. With several unique options, this can be considered one of the more interesting mythic minis, though I’m not sold on Celestial Servant’s effects being a good idea regarding the inclusion of it in a given game. However, at the same time, the powerful Force Channel-tree is mechanically fun and plays just as well, offsetting this minor complaint – so in the end, my final verdict will clock in at 5 stars.

You can get this nice array of options for your mythic paladins here on OBS and here on d20pfsrd.com’s shop!