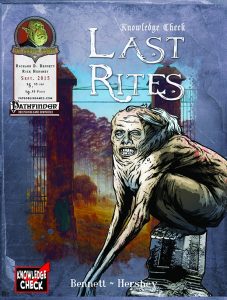 This installment of the Knowledge Check-series clocks in at 32 pages, 1 page front cover, 1 page editorial, 1 page ToC, 1 page SRD, 1 page back cover, leaving us with 28 pages of content, so let’s take a look!

After an introduction to what we’ll find within these pages for both players and GMs alike, the first chapter of this book deals with the particulars of death itself: From pallor mortis to algor mortis to post-mortem spasms, this section provides neat information that will prove to be useful, in particular when conducting in-game autopsies and first glimpse assessments, with sensible tie-ins to the art of necromancy featuring among them to account for the dimension of the fantastic.

Similarly, different components pertaining the rites of passing, for both living and dead, are covered – viewing and public display, oratories on the deceased person’s life, music and wakes, colors and superstitions – there is a lot to take into account when design such an event for a culture in your games. Similarly, from anointing the dead to transportation of the deceased, the pdf sports a handy list to contemplate. Beyond a plot hook focused on the funeral of a glorious queen, the pdf also mentions magical funeral rites – from the minor to the spectacular and, obviously, taking necromancy into account, this similarly is a solid list to consult. helping the spirit of a deceased wizard complete his own proper farewells is an intriguing adventure hook presented in this context.

Of course, the internment of the body is similarly something to consider and thus also gets a decent coverage…as are potential problems: The fear of being buried alive, cremation (and the fact that non-magical cremation will leave the bones probably behind…), mummification, embalming…a little section on mummy oddities, notes on exposure and burials at sea as well as cannibalism are provided. I particularly liked that the pdf calls out cannibalism as not necessarily the evil act popular fiction depicts it, though that trope is noted as well. Thanatology (scholars of death) and the theme of necromancy are similarly discussed, as are the most common beliefs pertaining life after death. And yes, the pdf also talks about the fact that, in most settings, people may actually know what comes after the big D. So yeah, this would basically be the massive collection of contemplations the pdf lists – and while many may elicit an “of course”, having them listed as is proves to be rather helpful. The constant and numerous adventure hooks similarly tend to be rather creative.

So, next up would be the new class options, which begins with the Grave Warden archetype for the slayer class. Instead of a talent at second level, the archetype gains the option to Quick Draw holy water and pour it as a swift action on a held weapon. Until the end of the next turn, the next attack with the weapon will also deal direct hit holy water damage. 7th level nets death ward at full CL, but the application costs 4 flasks and takes 1 minute to perform. All in all, I like the idea of this archetype. It’s execution is pretty neat as well. The second archetype herein would be the thanatologist alchemist, who replaces bomb with a sneak attack progression. 2nd level adds gentle repose as a 1st level extract and allows the thanatologist to add deathwatch as a first level extract formula when he learns it. 7th level adds blood biography as a 2nd level extract and 9th level blade of bright victory/dark triumph – though that one fails to specify its extract level, I assume the default 3rd. Again, a solid, if not too outré archetype with a minor hiccup.

The book also has new spells, 2 to be more precise: Memento Mori is a level one spell that lets all creatures who see you lose their next standard action (or ALL actions on a natural one). It doesn’t matter that successfully saving versus this spell makes you immune against it for 24 hours, this is a horribly broken spell and needs to die…or moved significantly up in levels. The second spell, grave binding, restricts an undead creature to its lair for a number of days…and has a mythic version that makes it permanent. Both spells, though, suffer from a complete lack of bolding and from the casting time being incorrect, both stating “1 action.”

Beyond these two somewhat problematic spells, the pdf also contains 3 nonmagical items, the first of which would be curse tablets, which may or may not have any effects. Ghost money, as favored in e.g. China, similarly is provided and we get rules for bells to counteract being buried alive by accident. A total of 4 magical items similarly are included: Coins of Repose prevent the raising of creatures as undead (or delay it), while preserving coffins, you guessed it, preserve the body of the deceased. Shroud of disintegration can turn bodies wrapped in them to dust on command and sepulchral staves are basically the deluxe, magical version of the accidental inhumation bell. The magic items suffer from a similar formatting glitch regarding their price, slot, etc.-part, though at last spells used in construction are italicized.

The final pages of this pdf are devoted to the ossuary of St. Len, a fluff-only brief on a location you can drop into your game, with an accompanying level 5 monk as supplemental NPC.

Editing and formatting are still generally good, though formatting has some serious glitches, as mentioned above. Layout adheres to Fat Goblin games’ neat two-column full-color standard for the series and the pdf sports several nice stock/public-domain artworks. The pdf comes with basic bookmarks, one per chapter.

Richard D. Bennett and Jason Wallace’s installment on last rites is interesting in that it can be seen as a good checklist when designing last rites and the burial customs of a given culture. The archetypes are okay, if a bit on the unspectacular side and the items generally make sense. The magic items are neat as well…but their formatting glitches are annoying. The spells, oddly stick out as extremely powerful, particularly in combination with the otherwise rather conservative design.

How to rate this, then? Well, here things become problematic for me: On the one side, I consider the check-list aspect and the items etc. useful and nice to have; on the other side, though, I kinda wished this pdf had a bit more in the uncommon-section…pertaining e.g. mummification by magical weather (hey, it works with regular weather!) or similar ideas. Additionally, the glitches and issues with components of the crunch do drag this down a bit. In the end, my final verdict will clock in at 3 stars.

You can get this check-list style book here on OBS!