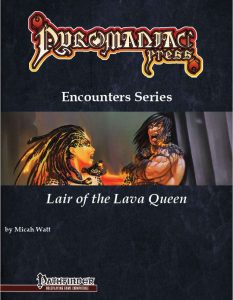 And yes, witnessing this horrific scene can render PCs shaken – nice to see some proper use of conditions there! The tactics of the lava queen are potent indeed and her abode has been constructed with the obvious intent of defending the place! Searing hot air currents and a new creature (think “magma-squid” with fiery rends and a fatiguing aura…and lava jets) await here – and worse yet, the lava queen has an artifact, the eye of Imix, which can bathe the wielder in flames and heal him – but also renders subjects to its powers helpless. It first fatigues, targets, then exhausts them and if you use its maximum uses, may even kill the wielder. I do have two complaints here: 1) The artifact lacks a suggested means of destruction and 2), while it can be used offensively, it has no range noted beyond mentioning “touched” for its effects when used thus – specifying its offensive use properly as a melee touch attack would have made sense, considering that the offensive use allows, as it should, for a save – it’s save-or-suck after all. However, touch attacks often do not allow for saves, hence a minor potential for confusion there. On the plus-side, the healing effect is not cheesable, which is a definite plus…and not sure whether you’d want to carry around an artifact that lets an evil elemental deity know your whereabouts…

The lava queen herself is btw. a unique medusa with a blistering aura, lava-like blood and no, she cannot be petrified via her own gaze…oh, and she can fling balls of lava. That being said, unfortunately her build does sport glitches in the basics – attack values, CMB, etc. RAW, she is actually deadlier than as depicted! Her CMB, for example, is incorrect and so are her attack values. She can be run as provided, but unlike her pet, the statblock needs a bit of work.

Editing and formatting are very good on a formal level – no complaints there. The lava queen is an amazing enemy, but the stats could have used another set of eyes. Layout adheres to a nice two-column full-color standard and the pdf features really impressive full-color artworks for the queen and the critter, with in particular the glorious cover-artwork making this potentially worthwhile for art-aficionados. Cartography leaves nothing to be desired, as far as I’m concerned. The pdf has basic bookmarks to front and back cover and editorial, but at this length, that’s still okay.

Micah Watt’s Lair of the Lava Queen is an extremely flavorful sidetrek dungeon with impressive production values for the price. I adore the flavor, I love the prose and even the flaws of the artifact, minor though they are, don’t weigh too heavily for me here – they only scratch at the verdict of what can be considered an impressive sidetrek. However, the fact that the boss’s stats aren’t correct is a big let-down that hurts the pdf. Russ Brown’s critter, the magma-squid, is btw., correct as far as I could surmise.

And then there’s the fact of the bang-for-buck-ratio: This pdf is really, really cheap. As in: Ridiculously cheap for what it offers. 2 bucks. The art and map alone and the critter are pretty much worth investing the time to briefly tinker with the map and fix the statblock – if you’re like me, the latter will take you 5 minutes, tops….and leaves you with an AMAZING villain in an evocative complex that practically demands being inserted into the game.

If you’re picky about stats, the queen will annoy you; if not, you’ll get an amazing value for your hard-earned money here. In the end, though, as a reviewer, I can’t rate this as highly as I would like to: Terrain, hazards, atmosphere – all excellent, but the glitches drag down what would be excellent to merely “good” – if you can look past aforementioned complaints, consider this a 5 star + seal recommendation, but my official verdict can’t go higher than 4 stars on this one.