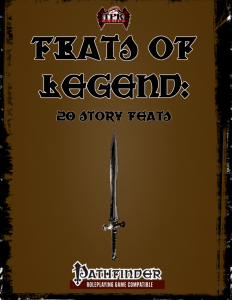 Okay, so this time around, we need to be a bit more precise – in case you missed the great Ultimate Campaign-book, here’s the gist: Story feats provide a benefit upon taking them, but also have a task – as such, taking them should be considered to be a joint-venture, something to discuss with the GM in question. Upon completing their task, they yield another bonus, providing a means of narrative scaling of abilities. It should come as no surprise that I am very much a proponent of this type of design, so yes, I do like the concept. It should also be noted that quite a few of them hinge upon defeating “challenging foes” – this is concisely defined in the pdf, thankfully allowing for the avoidance of book-skipping.

Okay, so that would be the basics…what about the feats? Well, Absent Parent nets you a heritage item that you need to use to defeat a challenging foe – if you do, you receive bonuses to social interactions with good folks and may reroll a roll 1/day. Demon Slayer is per se cool: It first just nets you a few numerical escalations, but upon completion, it provides uncanny dodge versus demons and an inability to become flat-footed via demons. That being said, completion is cheap – kill 20 HDs worth of demons or 5 times character level, whichever is greater. A dretch is CR 2 and can be summoned, so if you have some time on your hand, you can just slay the required number in safe confines. Sure, that’s cheesy, but RAW, it’s a valid way to fulfill the requirements. A simple diversity clause would have helped here.

Black God’s Bloodletter is intriguing in concept: Capture a challenging good creature, sacrifice it to your dark god and then gain DR 10/good and magic and fast healing 5 whenever you slay a good creature, for the creature’s HD in minutes….and infinite healing, highly cheesable. URGH. Next. Bring ‘Em Back Alive…is pretty amazing! It begins as a lame skill-bonus feat, but upon completion, you gain Knockout Blow with any melee weapon if you deal nonlethal damage. Pretty damn cool! Big kudos!

Dragon Devourer makes it your goal to eat a dragon’s heart…if you do, you gain DR 10/magic and energy resistance 10 against the associated energy. I’d complain here, but since encountering dragons is pretty much under GM-control anyways, I’m good with this. Extraplanar Escape is amazing – it requires that you escape via planar means from a prison and if you do, you gain an SP (plane shift, in the case of non-spell-based planar escapes) that you can cast 1/day…but only as a 1-hour ritual, which makes cheesing this impossible. Two thumbs up!

Headsman: Increases slashing damage with two-handed slashing weapons by crit-multiplier, but only against flat-footed or helpless targets; after having coup-de-grace’d enough creatures (based on HD/level – cheesable, in theory), you auto-confirm critical threats with such weapons against flat-footed or helpless opponents…which is very potent, yes, but also rather situational.

Incorruptible is really cool: Acquire a corruption, get rid of it in a strenuous process (determined by GM etc.) and then, become immune to further corruptions. See, this one is potent, yes, but it also helps tell a redemption-story and codifies its benefits. Inured to Necromancy requires withstanding an undead’s fear aura and helping defeat it, but yields rerolls versus fear effects upon completion. Kingpin is epic – automatically know where/if there’s a black market, rise within a black market…and gain basically a replenishing minor pool of gold that can be used each week to cover a variety of costs and tasks…really cool! License to Kill would be the James Bond feat and requires membership in an organization. It first yields only paltry skill-bonuses, but after finishing two challenging targets at the organization’s behalf, you get the ninja’s assassinate trick. Problem here: This trick is a master trick and there’s a reason for that – the feat’s prerequisites imho should reflect that, though, obviously, the GM does have control here.

Lost Love requires that you resurrect your lost love from the dead, netting you 1/day breath of life as an SP upon completion. Master Linguist is something rather cool – you need to learn 3 dead languages, but upon completion, you can potentially write ALL of them, with the caveat that the GM may still require Linguistics-checks. I know that quite a few folks may shrug here, but in my campaigns, this would be very potent indeed, so yeah – kudos! Redeemer focuses on, surprise, redeeming an evil foe – once you complete it, you’ll have 1/day atonement as an SP, which makes sense for the really good characters. Restored Nobility continues the theme of a disgraced house from various backgrounds – upon bringing your standing back to the proper level, you gain the vigilante’s renown, with interactions between talents properly codified…kudos!! Scion of Prophecy requires that you complete your prophecy, and when you do, you become seriously resilient to charms and compulsions, with a +5 bonus a daily reroll.

Sea Slain takes a cue from the Iron Isles and nets you a vision upon being drowned – once you have fulfilled the vision, you become amphibious and gain a swim speed! Yeah, this can be used in mystic of mythos contexts equally well. Betrayer has two options – after committing an act of betrayal versus an ally, you can elect to redeem or escalate this behavior, with potent benefits either way – unrepentant betrayers, for example, are treated as neutral…

Trollslayer is somewhat problematic, in that its completion benefit can suppress any form of regeneration or fast healing temporarily upon hitting a target, which is a bit much in my book. Finally, Wicked Lorekeeper is not what you’d think it is – whether due to an obsession or due to wanting to safeguard the dangerous knowledge, you become adept at finding evil and completion nets a bardic knowledge variant for the purpose of determining evil outsiders and the like.

Editing and formatting are very good – I noticed no serious hiccups in either formal or rules-language. Layout adheres to a two-column full-color standard with a parchment-style background and the pdf sports a few solid full-color artworks. The pdf comes fully bookmarked for your convenience with nested bookmarks.

Neal Litherland’s story feats are actually really well made – they are generic enough to allow for wildly diverging storytelling, their completion is for the most part in the GM’s hands (which provides a balancing option) and even in the cases where cheesing them is possible, it is more of a rules-aesthetic issue and not one that will actually show up. Now getting a master trick potentially long before you’d usually get it can be an issue, but once again, it is one that lies within the purview of the GM, who has, via the tasks required, full control. There are a few options like this or Trollslayer that go one step too far as far as I’m concerned, but as a whole, this is a feat-supplement well worth getting! In fact, it is my favorite installment in the whole series – refined, well-made and the feats manage to blend challenge, GM-control and narrative aspects well, while still providing ample motivation to get them.

In short, this is a really good pdf and after approximately the 10 gazillion feats I’ve seen, that bespeaks quality. While not 100% perfect, this should be considered to be a great addition to the game – and as such, my final verdict will clock in at 4.5 stars, rounded up for the purpose of this platform.

You can get these cool story feats here on OBS!